Yarmouk’s children and the imperative for humanitarian action 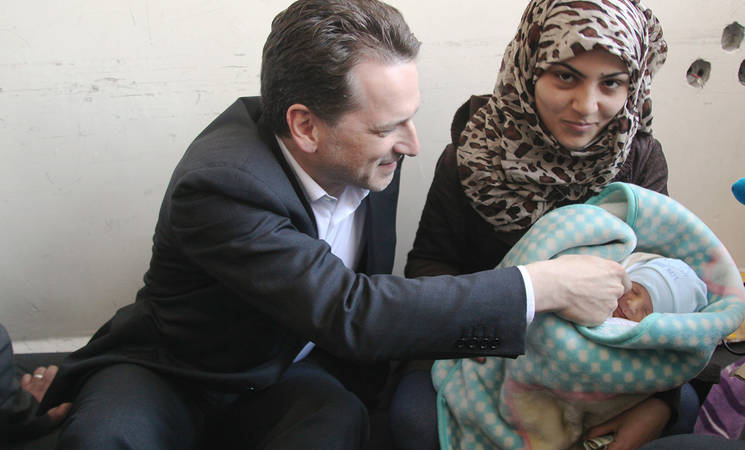 It is the individual lives at the heart of the Yarmouk story that make the imperative for humanitarian action so compelling. I encountered two such individuals on my mission to Damascus – Jihad and Mohammad -- tiny vulnerable infants who left Yarmouk in recent days, a place that was described last week by the Secretary-General as one of the “lower circles of hell”. The fact that they are alive truly make them miracle children.

Looking into those bright young faces, touching their pristine hands, the logic of our humanitarian mandate, the mission to protect, never felt stronger to me. Like the wider Syrian conflict, Yarmouk has a human face; the faces of young Mohammad and young Jihad. I want to introduce you to them in the hope that you too will understand why I am firmly convinced that turning away is not an option and why the international community must act in a concerted manner to respond to the many tragedies in Syria.

Jihad Ya'qoub, the youngest Palestine refugee to flee Yarmouk, was born on 30 March.  His mother, Said Fatima, never imagined bringing a child into this world could be so tough. "I was hoping to drink milk and eat eggs during my pregnancy, but our financial situation did allow us to buy these expensive food items”, she said. Said Fatima was living in a community where the average person survived on just 400 calories a day.

Mohammad was born in Yarmouk on 25 January 2015.  When ISIS entered the Camp and tensions heightened, his mother, Nadia, fled in search of safety. Her only thoughts were to save the life of her newborn son. Yet she has not lost hope in the possibility of a dignified future. She hopes that if and when life returns to normal she will be able to live once more with her husband and son in the family home in Yarmouk.

These tales of courage and human dignity are a lesson for us all. When I next brief the Security Council, as I did a few days ago, I will tell them about Jihad and Mohammad.  I will continue to press the case for humanitarian access to other children like them inside Yarmouk, other civilians who need help where they are. To do this, hostilities will have to subside. Pressures on armed actors in Yarmouk must be exerted to this end. Beyond that, those civilians wishing to temporarily leave must be allowed to do so safely.

These things are possible. It takes the political will, nothing more nothing less. Yarmouk must be a place where the politics of the possible begin to take hold. I believe they can. To abandon such belief would be to abandon Jihad, Mohammad and thousands of other civilians like them. This is not an option.