Home » Newsroom » Features » Yarmouk, the refugee camp that shames the world
Back to Newsroom

Yarmouk, the refugee camp that shames the world 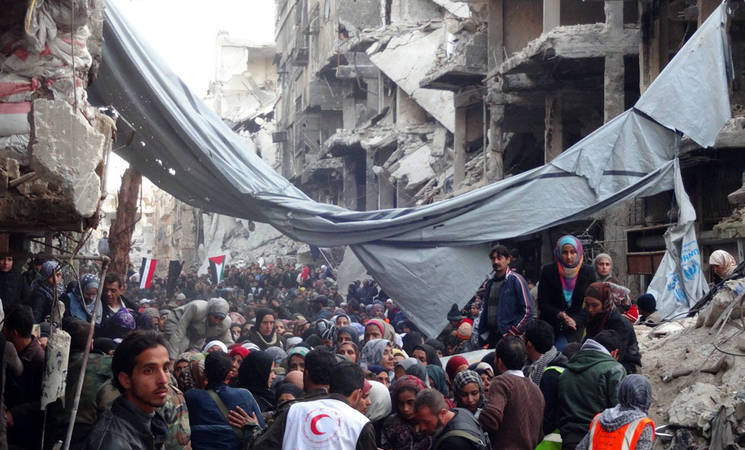 Tens of thousands of Palestinian refugees trapped in a Syrian camp by the war are enduring appalling conditions that ought to concern all of us. Christopher Gunness, spokesman for the UN relief effort, says humanitarian aid must be stepped up

The lexicon of man's inhumanity to man has a new word – Yarmouk. The camp, on the edge of Damascus , was once the bustling, vibrant heart of the Palestine refugee community in Syria, where 160,000 Palestinians lived in harmony with Syrians of all stripes. Over the past six months, it has become synonymous with infant malnutrition, women dying in childbirth for lack of medical care and besieged communities reduced to eating animal feed – all this in the capital city of a UN member state in the 21st century. Yarmouk sums up the tragic, profound suffering of civilians in the Syria conflict. It should not have to.

This tragedy has a human face. Khaled, aged 14 months, is a war child. He was born as Syria 's pitiless conflict engulfed Yarmouk: armed opposition groups entered the camp and government forces responded by encircling it. Trapped with his parents and four siblings, he has seen more suffering in his short life than most of us will experience in a lifetime.

Khaled embodies Syria 's tragic conflict, but also the opportunities that we must grasp. He would probably be dead had it not been for Dr Ibrahim Mohammad of the United Nations Relief and Works Agency (UNRWA), who treated him for a severe form of malnutrition known as kwashiorkor, caused by a prolonged lack of protein. He also had symptoms of rickets.

"When I first saw Khaled he looked like a five-month-old," says Mohammad. "He was about to die. Khaled had survived on water and almost no solid food for two months."

When asked about life in Yarmouk, Khaled's mother Noor, 29, becomes agitated. "Hell would be better," she says. "We boiled spices with water and drank it. We ate grass until all the grass was gone."

When Noor gave a birth to Khaled at home, she was able to breastfeed him, but with her poor diet her milk stopped after two months. Cow's milk smuggled into the camp was prohibitively expensive and no powdered milk was available. Khaled went without. He was lucky. Noor says her four-month-old niece starved to death.

"Everyone assumed they would soon be dead because of hunger or shelling," she says. "Death was everywhere. One of my neighbours died in childbirth. The midwife was called away mid-birth, to assist another woman, and when she returned, my neighbour had bled to death."

There are many Khaleds and many more Noors in Yarmouk. UNRWA workers have encountered them every morning since 18 January, when the Syrian authorities allowed UNRWA to take in food. Each day, crowds of gaunt figures await the distribution team on Rama Street , at the northern edge of the camp. After their ID cards are checked, some of them go across no man's land, defined by opposing sniper positions, and join the long queues to the distribution area.

The wait is stressful and exhausting. At the end of each day, once darkness falls and the UN distribution team returns to its base in Damascus , hundreds of civilians, in a visible state of desperation, fatigue and anguish, return to their harsh existence inside Yarmouk, many of them with nothing. On our best day, 30 January, we delivered more than 1,000 food parcels, each containing enough supplies to feed a family for about two weeks. On more difficult days, we have managed as few as 26 or as many as 645. War is no respecter of need.

As with all humanitarian work in conflict, rewards are small, frustrations are manifold and danger is everywhere.
On 14 January, an UNRWA relief convoy of six trucks with food for 6,000 people, along with 10,000 doses of polio vaccine and other medical supplies, left our main warehouse in Damascus . We were required to use the southern entrance to Yarmouk. This meant the convoy had to drive 20km through an area of intense conflict, in which numerous armed opposition groups, including some of the most extreme jihadist organisations, have a strong and active presence.
Citing security concerns, the Syrian authorities did not permit UNRWA to use the northern entrance to Yarmouk, which is under government control, and which is generally regarded as more likely to be accessible with relatively less risk.
As the convoy approached Yarmouk from the south, it was joined by a government security escort, which enabled the vehicles to reach the last government-controlled checkpoint. The convoy was cleared to go beyond and the Syrian authorities provided a bulldozer to clear the road of debris, earth mounds and other obstructions. However, as this was happening, the bulldozer was struck by gunfire and forced to withdraw, though with no casualties. Thereafter, bursts of gunfire, including heavy machine-gun fire, erupted close to the UNRWA vehicles. One mortar exploded close to the convoy. Our team withdrew, mercifully without casualties.

We were undaunted. Our humanitarian mission continues. Following successful access to Yarmouk on 18 January, we have now delivered more than 6,000 basic food parcels and 10,000 polio vaccines. This is not enough. We need more. We need secure, substantial and sustained access. And we need this for all civilians in Syria . There are many Yarmouks.
Let me end by returning to Khaled. Four weeks later, and he has been transformed with nutrition and medication. His lifeless face now carries a smile, his swollen abdomen and limbs look healthy thanks to the work of Mohammad. Today he weighs as much as an eight-month-old. He grew exponentially with modest assistance and with continued medical care.

Our health department is confident he will reach the size and weight of a normal, healthy baby.
Nature will take its course, we hope, and perhaps with a nurturing, stable environment, eventually Khaled will achieve his full human potential. That remains our goal for him and for all our beneficiaries in Yarmouk and beyond. We must see Khaled's rapid recovery and that of his mother Noor as symbols of hope, as symbols of our commitment to the people of Yarmouk and to all civilians in Syria .

Perhaps ultimately the word Yarmouk can take on another meaning. Perhaps when the war is over, Yarmouk will come to be seen as an example of human compassion, where the pitilessness of war was overcome by the sheer force of human dignity.

For more information on UNRWA's work in Yarmouk, or to donate, contact [email protected]

This story first appeared at the Guardian.