Home » Newsroom » Features » Young Photographer Turns Her Passion into a Career: UNRWA Vocational Training In Action
Back to Newsroom

Young Photographer Turns Her Passion into a Career: UNRWA Vocational Training In Action 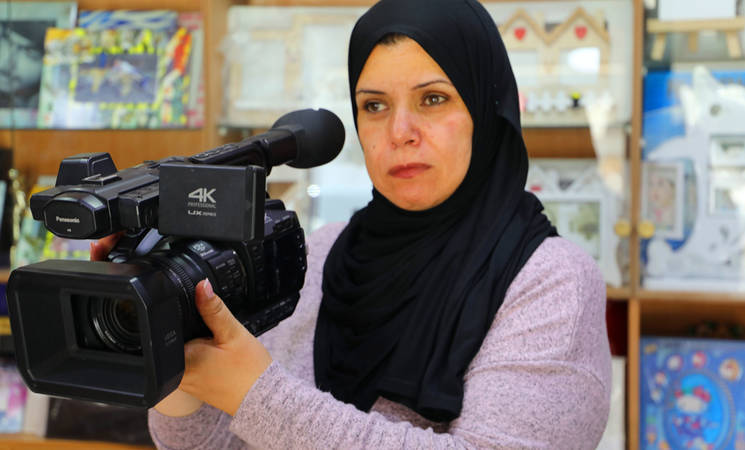 Wijdan Haroun from al-Amari camp in the West Bank did not expect to become a professional photographer and videographer; nor did she expect to end up training other young Palestine refugee women in the art of photography and share her passion. “I have love photography for many years and I've always photographed my friends and family for any occasion.  Everyone knows that I love to photograph. When UNRWA provided the photography course, I immediately became involved,” exclaims Wijdan.

It all began about seven years ago with an UNRWA training course in photography, which was offered free-of-charge through what was then called “The Poverty Alleviation Programme” of the Department of Relief and Social Services.  Encouraged by friends to pursue her passion as a career, these training courses gave a professional polish to what was until then just a fascination with the photography. She also got a professional camera through a grant associated with the same training course.  “Photography was always a major hobby for me. After I completed this specialized training, I immediately found work in this field and was able to earn money.”

As a volunteer in the Lod Association in al Amari camp, she also immediately started training other female Palestine refugees from Amari and other refugee camps in the area. They later also became professional photographers. “I know the Palestinian refugee women and their condition very well. They don't have the money to buy a camera or go to a training course. That’s why I am helping them all the time. Every time I find an opportunity to help a Palestinian refugee woman, I do so without hesitation.”

As a female photographer and videographer, Wijdan fills a specialized niche in the male-dominated wedding photography profession, primarily covering the women’s section at these weddings, which are traditionally off-limits to men. “I film wedding and various other celebrations by request,” she says. “On these occasions, I am always accompanied by photographers from among the women I trained, or other professional photographers,” she adds.

She is currently under contract with three local photography studios and hopes to set up her own studio where she can employ a team of young refugee men and women. “Seven years ago, I was doing nothing, spending most of my time at home or going out for family visits. Now that I am working, I am busy all week.  Sometimes, I don't have time for myself, especially in the summer and at parties. I am proud of myself and what I have accomplished, that I became a working woman. I cannot imagine myself going back to my previous life without work,” she says.

The “Poverty Alleviation Programme”, which is today called the “Micro Credit Community Support Programme”, was first established in the West Bank in 1994 and forms part of the holistic UNRWA approach to tackle poverty and the disruptive effects associated with over 70 years of displacement. Poverty remains prevalent amongst Palestine refugees, with those suffering the impacts of conflict (Gaza and Syria), occupation (West Bank), blockade (Gaza) and social and economic exclusion (Lebanon) bearing the brunt. Poverty rates are also typically higher inside Palestine refugee camps, where approximately one third of the Palestine refugee population live. Poverty eradication and respect for human rights, central pillars of the Sustainable Development Goals (SDGs), are at the core of the Agency’s human development, humanitarian and protection work. By investing in the human capital of Palestine refugees, UNRWA actively contributes to the realization of the 2030 Agenda.