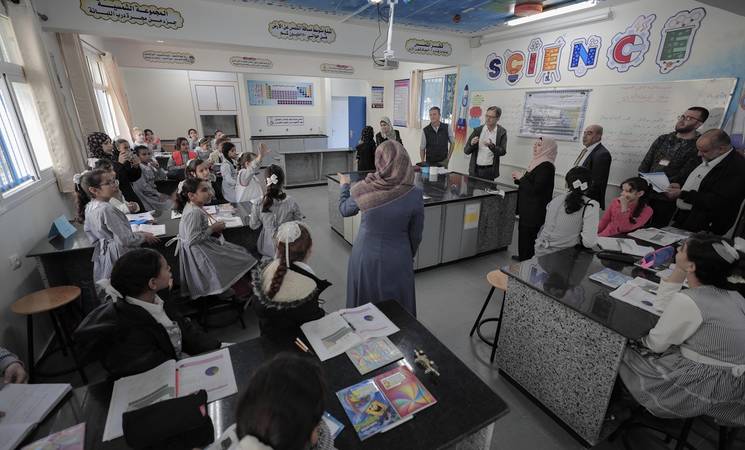 EAST JERUSALEM, 11 November 2022 - On Wednesday, 9 November the United Nations Relief and Works Agency for Palestine Refugees in the Near East (UNRWA) welcomed a German delegation led by Oliver Owcza, Head of the German Representative Office in Ramallah to Gaza. Together with Thomas White, Director of UNRWA Affairs in Gaza, the delegation visited the UNRWA Al - Quds School in Jabalia Camp, in the north of the Gaza Strip, which is one of many sites across Gaza where employment generation and (school) infrastructure rehabilitation and maintenance projects have been implemented by the Agency since 2020 in two phases with generous financial support of the German Federal Ministry for Economic Cooperation and Development (BMZ) through KfW Development Bank. Throughout project implementation in both phases more than 11,000 temporary job opportunities were created for Palestine refugees via the UNRWA Job Creation Programme. Additionally, more than 600 temporary job opportunities were generated by local contractors in the local market. In both phases 59 social infrastructure premises (e.g. schools, health centres) have been rehabilitated or upgraded.

The Director of UNRWA Affairs in Gaza, Thomas White, said, “I would like to express my thanks and appreciation to Germany for this generous support to UNRWA and Palestine refugees. This continued funding reaffirms Germany’s commitment to Palestine refugees. Germany is one of our leading and most valued partners in sustainably rehabilitating UNRWA schools, health centers and other installations as well as creating job opportunities for Palestine refugees.”

During the visit, the delegation toured new science and computer laboratories which were added to Al-Quds School and interacted with students, teachers, as well as Palestine refugees, who benefited from temporary employment opportunities under the project.

Oliver Owcza, Head of the German Representative Office, said: “Germany is a reliable partner to UNRWA and its essential work in support of Palestine refugees across the region. Under the prevailing political circumstances, promoting temporary employment opportunities, and sustaining UNRWA basic services can support Palestine refugees’ resilience to cope with the manifold challenges they are facing. Improving their precarious living conditions, especially in Gaza where poverty and unemployment rates are skyrocketing, remains a key priority of the German Government.”

The visit to Gaza was followed by the signing of two new agreements with KfW totaling EUR 36 million in support of Palestine refugees and UNRWA in Gaza, Jordan and Lebanon.

The first of these agreements was a EUR 18 million contribution to UNRWA funding short-term employment and on-the job training opportunities for Palestinian refugees in Gaza as well as social infrastructure rehabilitation and maintenance. This project, Employment Generation and Infrastructure in Gaza, Phase III, is aiming to benefit 10,150 Palestine refugees through the UNRWA Job Creation Programme, including 3,000 women and thereby indirectly benefiting up to 46,000 family members. In addition to this, appr. 11,000 Palestine refugees will be supported through the upgrading of social infrastructure.

The second agreement signed is a EUR 18 million contribution towards supporting the Agency’s education, health, sanitation and associated support services for Palestine refugees in Lebanon and Jordan. It contributes to the resilience and protection of vulnerable Palestine refugees affected by the Syria conflict and the severe economic crisis in Lebanon.