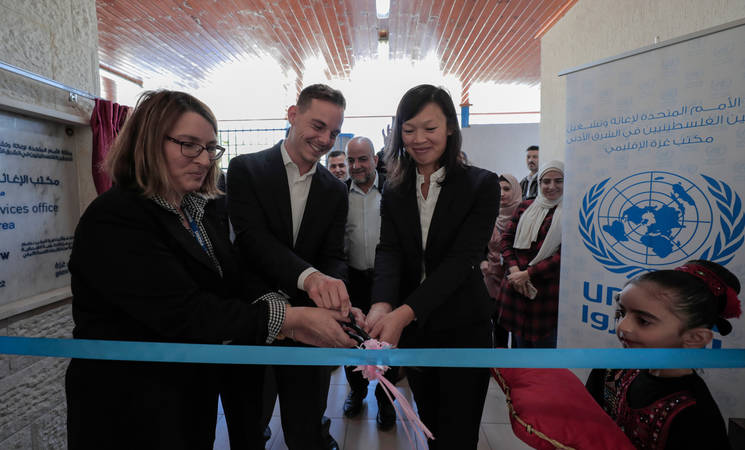 Germany among the largest donors to UNRWA, having contributed over EUR 180 million in 2022

The United Nations Relief and Works Agency for Palestine Refugees in the Near East (UNRWA) welcomed a German delegation from the German Representative Office in Ramallah to Gaza.

Meeting with Jenifer Austin, Deputy Director of UNRWA Affairs in Gaza, the delegation visited Al Amal Elementary Girls School, in Khan Younis Area, as well as several reconstruction projects funded from the German Federal Ministry for Economic Cooperation and Development (BMZ) through KfW Development Bank. The visit concluded with a tour and inauguration of the new Relief and Social Services (RSS) office in Gaza City.

Oliver Owcza, Head of the German Representative Office in Ramallah, said: “With three new funding agreements, Germany continues its solidarity with, and long-standing commitment to improving the living conditions, for Palestine refugees in the region, especially in the crisis affected contexts of Lebanon and Gaza. Germany is a reliable partner for UNRWA, its critical support to the Palestine refugee community, and efforts to contribute to stability in the region.”

During the visit, the delegation spoke with students, teachers, as well as Palestine refugees who have benefited from the delivery of these projects, including meeting refugee families whose lives have been transformed by their move from dilapidated shelters in overcrowded areas of Khan Younis Camp to nearby newly constructed multi-story buildings as part of camp improvement interventions, as well as some of the 131,000 Palestine refugees who can now benefit from the new custom-built Relief and Social Services (RSS) office, where UNRWA services support some of the most vulnerable in the community, particularly women, children, people with disabilities, and the elderly.

UNRWA Director of Partnerships, Karim Amer, said, “We express our sincere gratitude to Germany for their continued strong partnership as exemplified by the level of support extended in 2022. These new agreements focus on supporting Palestine refugees with infrastructure projects, shelter rehabilitation and cash for work programmes across Gaza and Lebanon. This brings tangible benefits to people’s lives and the well-being of vulnerable individuals in communities facing unprecedently difficult conditions. These agreements highlight the important, reliable and sustainable funding that Germany - a strong supporter of Palestine refugees - provides to UNRWA.”