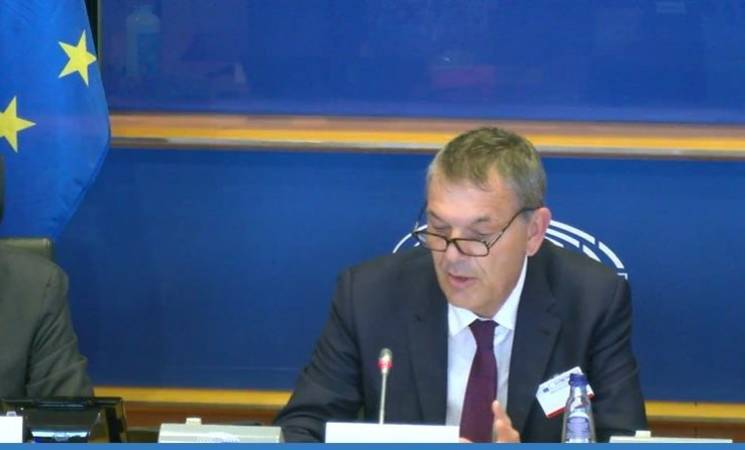 On 31 August 2022, Commission-General Philippe Lazzarini briefed Members of the European Parliament's Committee on Foreign Affairs about the deteriorating situation of Palestine refugees in the Middle East, including the impact of the Ukraine crisis and the last escalation in Gaza earlier this month. During the exchange of views in Brussels, the Commissioner-General also addressed the critical financial situation of the Agency and thanked the Members of the European Parliament for playing a key role in the fruitful EU-UNRWA partnership.

Thank you very much, Mr. Chair, for the invitation to address this Committee, and sincere thanks to all the Members present today.

I value our dialogue and highly appreciate our annual exchanges. My second appearance in fact in this Committee.

Let me start by stressing how the partnership between UNRWA and the European Union has grown stronger.

Last year we celebrated its 50th anniversary, with the signing of a new Joint Declaration.

The EU is one of the most reliable and strategic donors to the Agency, announcing once again this year predictable funding for the next three years.

It is also thanks to this House that the EU continues to remain one of the strongest allies of UNRWA, as you highlighted, Mr. Chair.

I, therefore, wish to thank you for your continued shows of support, including through your appeals to sustain and increase EU funding to the Agency.

The consequences of the war in Ukraine are being felt worldwide.

The countries UNRWA operates in are no exception.

The soaring prices of food and commodities are plunging Palestine refugees in the region into deeper poverty with over eighty percent living below the poverty line in Gaza, Lebanon and Syria.

Four of the five fields where UNRWA operates remain in crisis.

In Gaza, the escalation of violence earlier this month was a stark reminder that war can erupt anytime in the absence of a genuine and comprehensive effort to resolve the conflict.

Over three days, sixty Palestine refugee families lost their home. Seventeen children were killed. Eight were students in our schools.

Almost one in two UNRWA student suffers from trauma and needs special assistance to cope with the repeated cycles of violence and the economic hardship that their families go through.

In the West Bank, including East Jerusalem, political, economic and security conditions are deteriorating as Palestine refugees experience high levels of dispossession, violence and insecurity.

In Syria, after 11 years of conflict, the most destitute families are returning to live amid the rubble of their destroyed homes as they cannot anymore afford to pay their rent.

In Lebanon, the pressure on the Agency to do more to address the impact of the economic and financial collapse on the Palestine refugee community is just becoming unbearable.

Illegal migration of Palestine refugees is also on the rise.

For many, this is their only hope for a better future.

In Jordan, the pandemic has left deep scars on the labor market. Unemployment is soaring, particularly for females and young people.

For millions of Palestine refugees across the region, going to school, getting health services, receiving a food parcel are their only sources of normality.

They look to UNRWA for that normality.

Today, our collective achievements are at risk.

The chronic underfunding of the Agency over the last decade makes it increasingly challenging for us to fulfil the mandate we received from the UN General Assembly.

The Agency has also experienced more than once how a change in domestic politics can suspend support overnight.

Despite immense outreach efforts, funding has stagnated over the last decade, forcing us to operate with a shortfall of around US$ 100 million each year.

But in the larger scheme, this is the figure that will help continue injecting stability and hope among one of the most destitute and desperate communities in the region.

For several years now, we have managed this underfunding internally.

But, as an Agency, we have depleted our reserves.

We reduced operational costs by over US$ 600 million since 2015.

Today, we have reached the limits of austerity and cost control measures.

To those asking whether the Agency can further reduce its services to match the available funds, I pose the following questions:

How many children are we ready to put in one classroom? In Gaza, it is already fifty.

Which refugee patients should be denied life-saving hospitalization?

Which families who already report reducing their food intake should not be included in the next round of food or cash distribution?

For Palestine refugees, UNRWA remains the last pillar of the commitment of the international community to their right to a dignified life and to a just and lasting solution.

A major aspect of the role of UNRWA in regional stability stems from the predictability of its high-quality services.

But when Palestine refugees see us delaying salaries, decreasing the quality of the services and being unable to respond to increasing needs, they see the support of the international community fading.

Despair and sense of abandonment are growing in Palestine refugee camps.

And despair is a threat to peace and stability.

You heard me saying that UNRWA is now facing an existential threat due to the nature of its financial crisis.

This threat is real and should not be underestimated

The Agency is under three sources of intense pressure:

The commitment of the General Assembly to uphold the rights of Palestine refugees and its instruction to UNRWA to deliver a number of public-like services until a just and lasting solution.

The lack of sufficient funding from UN Member States to implement the mandate and the unpredictability of most of the funding.

The perception that any changes to services or the way they are delivered is an attempt to encroach on the rights of the refugees. Hosts and refugees fear that it may lead to weakening UNRWA and, with time, dismantling it all together, and this in the absence of a lasting solution.

So, failing to reconcile these demands will make the mandate more and more impossible to implement.

Despite this immense challenge, UNRWA is constantly looking to adapt and evolve by innovating and stretching resources to service the greatest need.

Our health services are already largely digitalized, and telemedicine, which started in Gaza as a response to the pandemic, is now being mainstreamed across all fields.

As every child must be able to perform and compete in an increasingly digitalized world, UNRWA is committed to giving Palestine refugees that ability.

We are putting educational technology and increasing digital literacy at the core of our education program.

And the EU is contributing directly to this goal by giving 3,000 tablets to Palestine refugees.

Let me pause here for a moment to address the value of UNRWA education.

And I want to do so because I think we share the same view: that education remains a powerful and fundamental tool in helping every child achieve their full potential and building peaceful societies.

They do not always have the well-being of Palestine refugee children at heart.

Sometimes, they do not even hide their agenda and actively spread baseless and shameless accusations in a sensationalist way.

To undermine the Agency’s reputation and its funding.

And what is their end goal?

To undermine the rights of Palestine refugees.

I will repeat what I mentioned last year to this Committee: UNRWA has zero tolerance for hate speech, incitement to violence and discrimination.

But zero-tolerance does not equate to zero risk - especially in the complex and highly politicized and emotional environment in which we operate.

Therefore, we continue to spare no effort to uphold humanitarian principles, including neutrality, and the values of the United Nations:

Starting this week, our 710 schools are opening their doors to over half a million girls and boys.

For decades, in cooperation with UNESCO and UNICEF, we provide an education, that enshrines a human rights culture, seeking to instill tolerance in a context where children are exposed to poverty, exposed to conflict, exposed to displacement and exposed to violence.

The World Bank and UNHCR have praised the quality and efficiency of our education, stressing how UNRWA students outperform their peers attending public school by one year of learning.

So, I am inviting you to come to our schools to witness the eagerness, the brightness and the sharpness of our school children.

It is truly a success story.

Palestine refugees hold on very tightly to a good education.

They know that education is a passport to a better life and to a brighter future.

You must be able to see for yourselves the positive change that your support has helped create.

Your investment in the education, dignity and hope of Palestine refugees is definitely an investment in regional stability and peace.

It is an irreplaceable investment and an investment we should all be proud of.