Commissioner-General Statement on the Latest Developments in Gaza 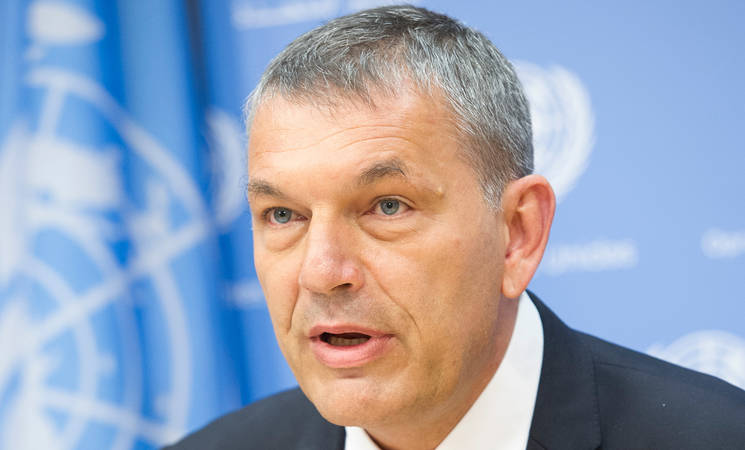 I am seriously concerned by the gravity and magnitude of the attacks directed against the senior management of UNRWA in the Gaza Strip over the past week, including the assembly of a very large protest in front of the UNRWA Gaza Field Office compound on Monday 31 May 2021. The Agency notes with concern that some of the slogans, statements and parodies circulated in the last two days in particular, directly targeting the Director and Senior Deputy Director of UNRWA Operations in Gaza are unacceptable and tantamount to threats to the safety and security of UNRWA staff members.

In addition, I am aware that certain news outlets have reported that “Palestinian factions” have declared the Director and Senior Deputy Director of UNRWA Operations in Gaza persona non grata, something that UNRWA was not formally notified of.  UNRWA senior staff continue to lead the Gaza field office.

I have called the Director and Senior Deputy Director of UNRWA Operations in Gaza to the Agency’s Headquarters in East Jerusalem for consultations over the situation and steps to take to enable the continuation of all UNRWA services.

I hereby reiterate my and the Agency’s full support to the Director and Senior Deputy Director of Operations in Gaza, and extend thanks to every single staff member of the Gaza Field Office for their commitment and hard work during and after the 11-days hostilities. The Gaza Field Office staff ensured that over 70,000 displaced people who found refuge in UNRWA schools were safe. It took an immense team spirit to remain cohesive against such huge adversity, and the Agency salutes the enormous dedication of all colleagues, management, Area chiefs, Area staff, support colleagues, security guards and everyone else, many of whom lost loved ones and still continued to work. I also reiterate my deep condolences to those who lost loved ones.

UNRWA has unequivocally condemned the killing and wounding of all civilians, including Palestine refugees, and has consistently called on all parties to ensure the protection of civilians during the recent hostilities in Gaza and the recent escalation of violence in the West Bank, including East Jerusalem.  UNRWA has recently reiterated at the UN Security Council that the Agency is deeply concerned about the trauma and psycho-social impact that relentless airstrikes and rocket attacks have inflicted on civilians, especially children.

UNRWA strongly protested and contested the position conveyed by the De Facto authorities in Gaza that they could no longer guarantee the safety and security of our staff. Regrettably, such a position left the Agency with no other choice than to ask the staff to leave the Gaza Strip as their security is of paramount priority to UNRWA.

In the aftermath of a devastating conflict and the urgent need to help Palestine refugees in Gaza feel safe, UNRWA must be able to deploy all its staff and efforts without any fear for their safety and security. UNRWA senior management, health, education, camp improvement and social workers are fully mobilized to respond to the immense needs of 1.4 million Palestine refugees as they arise after 11 days of hostilities. It is not possible for UNRWA to deploy staff across Gaza without explicit safety and security guarantees that they will all be protected.

In the immediate coming period, UNRWA will focus on rehabilitating homes that have been destroyed, ensuring adequate cash and food assistance to those hit hardest by the conflict, and resume all its critical services, including the vaccination campaign against COVID-19.

This is a time for a strong UNRWA, and any attempts to tarnish the reputation of the Agency or its staff can only undermine its ability to deliver critical services to a population whose needs are immense, and only growing, after the recent hostilities.

To be able to do that, UNRWA needs clear and unequivocal guarantees that its staff’s safety and security will be protected at all times.