The Commissioner-General statement before the United Nations Security Council 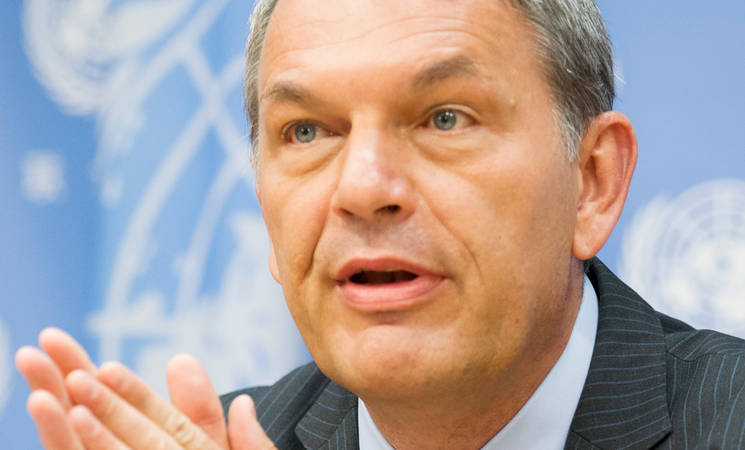 Distinguished Members of the Security Council,

Allow me to express my sincere appreciation for this opportunity to address the UN Security Council.

I am addressing you  from the UNRWA headquarters in East Jerusalem, only a few hundred meters from the neighborhood of Sheikh Jarrah, where eight Palestine refugee families face the threat of forced eviction from their homes.

I am also addressing the Council after having spent part of the week in Gaza, listening to countless stories of the tragic loss of loved ones.

Following 11 days of airstrikes by the Israeli military forces and rocket attacks launched by Palestinian armed groups, over 250 people were killed in Gaza; 66 of them were children, of whom 19 went to UNRWA schools.

In Israel 12 people, including 2 children, were killed.

All loss of innocent civilians' lives is unacceptable. My deep condolences go to those who lost loved ones.

Thousands more have been injured.

These are not just statistics. They are civilians whose life and dreams have been taken away.

Let me pause for a moment to acknowledge and show my appreciation for my UNRWA colleagues in Gaza who - under the leadership of our Director, Matthias Schmale - were on the frontline to protect and assist the population.

Every morning they overcame their gripping fear and made the dangerous journey to our health centres and schools -turned - into - shelters to help those in need.

They went to work without knowing whether their families would still be alive at the end of the day. Our health and sanitation workers, our social workers and engineers worked relentlessly for eleven days in what they described to me as ‘hell on earth’.

Hell because, for eleven days, there was no respite in the fighting. There was no humanitarian truce to allow for emergency medical assistance to the wounded, relief for the displaced or just for getting food without the risk of being in the wrong place at the wrong time.

Hell for 70,000 people who sought refuge in our schools because living under a blockade left them with no other place to seek protection.

Hell because of the intensity of the relentless airstrikes on densely populated areas in the heart of Gaza. Almost everyone I met described feeling terrified and traumatized.

I met parents who every night asked themselves whether to have all their children sleep near them or to spread them around the house. Should they all die together? Or should they try to save some by scattering them?

An UNRWA colleague described how she discussed dinner plans with her sister on the last day of Ramadan. An hour later, the sister and her daughter were killed in an airstrike. The daughter’s wedding had been planned for the following week.

I met a man from the Abu Hatab family who lost ten loved ones, including his wife and his four children, when his building collapsed. He had gone out to buy food and returned to see that his entire universe had been shattered. Days after the event he still wondered what happened, while his only child who survived stopped talking. I had no answer to give.

This last conflict is the fourth conflict in 13 years. Every conflict destroys lives, buildings, basic infrastructure and sends Gaza back many years. These conflicts happen while an enduring blockade has crippled the economy for 14 years, has led to skyrocketing unemployment and brought the Gaza healthcare system to its knees, undermining its capacity to respond to the surge of COVID-19 and meet the needs of those injured.

The international humanitarian community has now shifted from emergency mode to assessing the totality of the damage done to homes, infrastructure and, most importantly, to human lives.

I am especially concerned about the trauma and psycho-social impact that relentless airstrikes and rockets attacks have inflicted on civilians, especially children.

I am also concerned about a new wave of COVID-19 infection among the population in Gaza and that access to vaccine becomes more urgent than ever.

Last week, I met some members of the Sheikh Jarrah families in East Jerusalem. Mohammed al-Kurd shared his feelings of injustice and fear. Injustice because his family faces a second forced displacement. Fear from the daily violent harassment from those who want to expel him from his childhood home. Thousands of people live in a fear similar to Mohammed’s in the West Bank, including in East Jerusalem with eviction and demolition orders pending on their homes and properties.

During the escalation in Gaza, not enough public attention has been shed on the serious protection situation in the West Bank which affected Palestine refugees and civilians alike.

We saw a major increase in Israeli security forces’ incursions, search and arrest operations, as well as settler violence. Of particular concern was the heavy use of live ammunition during demonstrations where Palestinian refugees were among the injured and killed.

I am also concerned by the potential excessive and misuse of non-lethal weaponry like tear gas in and around the narrow alleys of Palestine refugee camps. Repeated exposure may create health challenges that derive from tear gas seeping into homes and sticking to clothes.

Despair is spreading in Palestine refugee camps beyond the occupied Palestinian territory. Despair and loss of hope make a dangerous mix in a highly volatile region, particularly for the youth, who feel increasingly disenfranchised and trapped.

In Lebanon, nearly the entire population in the camps lives under the poverty line. During my last visit, I saw hopelessness growing. I met a young Palestine refugee who said he constantly asks himself whether he would die from COVID, from hunger, or while trying to cross the Mediterranean on a dingy.

During my last visit to Syria, I saw children in school uniforms emerging from the rubble of the Yarmouk camp to jump on an UNRWA bus. Their families had come to live amidst debris because they could no longer afford to pay rent.

In Jordan, despite relative stability, the pandemic dealt a huge blow to the economy. Again, the most vulnerable, like Palestine refugees - especially those who have fled from Syria - are hit hardest.

A strong UNRWA is one in which young Palestine refugees, girls and boys alike, can go very far thanks to a quality education.

Loay Elbasyouni, one of the engineers behind the American helicopter that went to Mars, is a former student of an UNRWA school in Beit Hanoun in Gaza. He went from Gaza to NASA.

That is how far our students can go when they are empowered. Like their peers elsewhere, they have unlimited potential.

A strong UNRWA requires predictable and sufficient funding for adequate planning and delivery of services.

It is one of the most cost-effective investments that member States can make.

This year alone the United Nations High Commissioner for Refugees the World Bank and the British Council all acknowledged the excellence of the UNRWA education.

Our education is an antidote to the widespread violence, hatred and intolerance spreading in the region. Weakening UNRWA will only fuel existing divisions.

I am asking Member States to stand by the Agency and support UNRWA from repeated political attacks that seeks to undermine its role and its mandate.

UNRWA is an Agency that advocates for refugees’ rights in accordance with international law, including related UN resolutions.

Those who believe that by undermining the reputation and the legitimacy of the Agency they can somehow erase the Palestine refugee issue are fooling themselves.

To erase or ignore their history is not only discriminatory, it is based on misinformation and the denial of established facts.

Palestine refugees derive their status and rights from international law. The same law that strives to promote peace and equality. By seeking to weaken UNRWA, those who attack it only weaken the prospect for peace.

The last weeks have been a stark reminder that war and violence persist in the absence of genuine and comprehensive effort to resolve the Israeli-Palestinian conflict. Putting on hold the political track by containing the conflict should not be an option anymore.

First, and we hear it from the Special Coordinator, we need to break the Sisyphean approach of post conflict response in Gaza.  A response limited to humanitarian and recovery assistance will not prevent the next round of conflict. The recovery phase needs to be accompanied by a genuine political track aimed at lifting the blockade on people, goods and trade, in line with UN Security Council resolution 1860.

Second, I echo the Special Coordinator’s call that perpetrators of violations of international law on all sides must be held accountable and swiftly brought to justice.

Third, to prevent further escalations of tensions in West Bank, including in East Jerusalem, forced evictions and administrative demolitions, contrary to international law, should end.

Fourth, humanitarian and reconstruction efforts should be fully funded and efforts to scale up the availability of COVID vaccines supported.

In closing, no one has asked to remain a refugee seven decades later. Every Palestine refugee I meet wants a “normal life”, wants the right to live without fear and without discrimination.

Like all people, they have an equal right to the enjoyment of their human rights in accordance with international law.

This means that children can play and go to school, parents can protect and take care of their children, and young people have dreams.

It also means living in peace, not fearful of the next conflict.

Together, we must ensure that a sense of normality and stability remains in the lives of Palestine refugees through a strong UNRWA.