UNRWA is devastated by the news that in the same incident that took the life of our colleague, a number of civilians were also killed.  Tragically, this also includes Mohammad Ali Fares, 13 years old, a student in one of our schools, along with his 10 year old cousin, Rasha Nabeel Al Zawahra.  Our heartfelt condolences go out to all those impacted by this tragic event.

UNRWA reiterates its call on all parties to the conflict in Syria to protect civilians from all forms of violence. 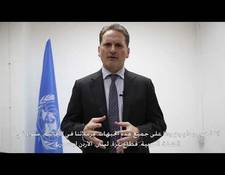