An icon two years on begs some unsettling questions 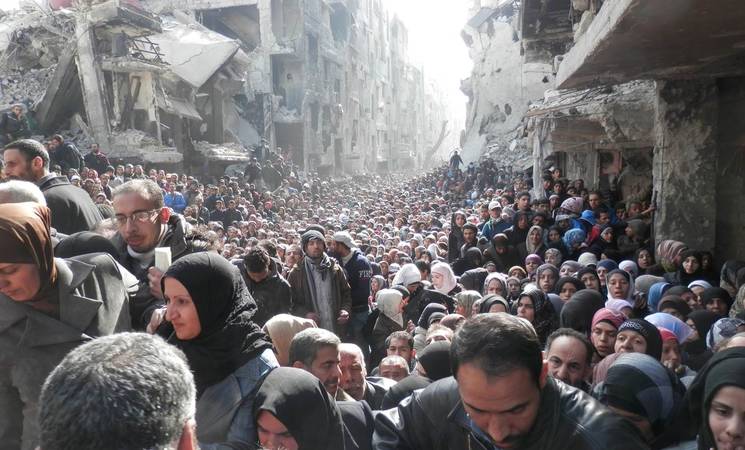 It is now two years since the iconic photo of thousands of bewildered, besieged civilians in the Palestine refugee camp of Yarmouk, Damascus was taken. Traumatized and drained of all emotion, children, women, the sick, the elderly, the dying waited in the besieged camp for food from UNRWA, the UN agency mandated to bring them aid. It was an image whose graphic power seared itself into the collective memory of our age, as the word “Yarmouk” was added to the appalling lexicon of man’s inhumanity to man. The photo went viral and thus became an icon of Syria’s pitiless conflict.

The UN Secretary General, Ban Ki-moon was later to describe Yarmouk as akin to the lower regions of hell; a refugee camp that had become a death camp. Yarmouk was once home to some 150,000 Palestinians. Each has a humanity, an individual dignity that must be recognized, respected and nurtured.

Yet two years on, as peace talks begin in Geneva and just days before the London conference on Syria, this haunting image begs some discomfiting questions. Where are the individuals now, whose faces stare compelling out at us? Are they alive or dead? Did they become part of a lost generation? Were they left behind? The majority are Palestinians yet is the plight of this marginalized community being overlooked, dwarfed by the sheer enormity of the Syrian tragedy?

We owe it to each and every individual in that photo, to ourselves and to future generations to find answers to these questions. Without them, the stain that is Yarmouk will forever be on the conscience of humanity.