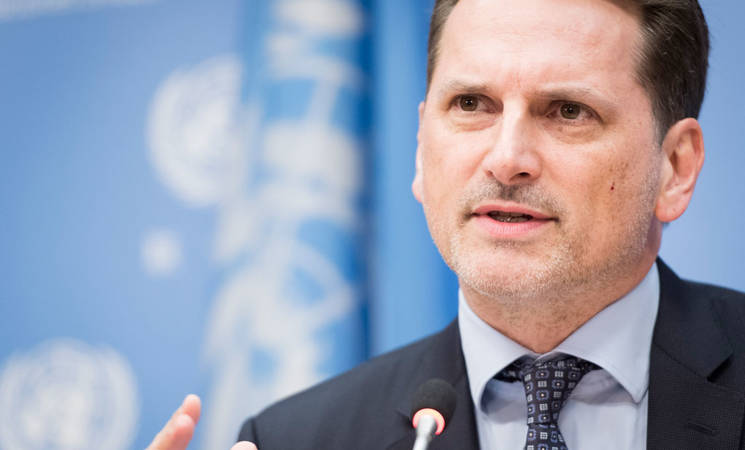 Remarks by UNRWA Commissioner-General Pierre Krähenbühl at a special meeting on the sustainability of UNRWA held at the UN Headquarters in New York, 4 May 2016

Mr. Secretary-General, I am deeply honored and grateful for your presence today, and for the strong backing and consistent solidarity that you have displayed towards UNRWA at all times. Your personal support is invaluable to the Agency and to Palestine refugees.

Ambassador Kawar and Ambassador Skoog, I would also like to convey my sincere appreciation to you personally, and to the two countries for hosting this meeting, which reflects the strength of the partnerships UNRWA enjoys with Jordan and Sweden.

When we met last year here in New York, in the margins of the General Assembly, UNRWA was emerging from a severe financial crisis in the form of a funding shortfall of $101 million US dollars. This was certainly not the first time the Agency had faced a delicate financial situation, but it was the most critical one in our now 66-year history and it threatened the opening of our 700 schools in the Middle-East.

I am very glad today to have another opportunity to highlight the extraordinary mobilization of partners that allowed us to bridge this gap last year and enabled us to sustain the schooling for 500,000 boys and girls. Thank you to our historic supporters. Thank you to the host countries and to the countries and institutions that rose to the occasion last summer. This generosity will seriously never be forgotten.

The 2015 shortfall shed a new light on the risks of an underfunded UNRWA. At a time when the region is more unstable and conflict-affected than ever and when the world is deeply worried by increased radicalization, is seeking ways to prevent violent extremism and is observing the growing movement of refugees and migrants, UNRWA’s role as a contributor to a measure of dignity and stability, was more clearly recognized than ever last year, as was the urgency of breaking the cycle of UNRWA’s financial instability.

I said last September in the meeting organized and chaired by Jordan and Sweden that UNRWA is very determined, in close cooperation with our host and donor partners, to do its part to put the Agency on a more stable financial footing. We introduced stringent budget processes and controls and approved a zero-growth budget for 2016. UNRWA reduced around $12 million in core planned expenditure in 2015 and forecasts a further reduction of around $18 million this year. On present estimates, by the end of 2016 we will have held expenditure relatively stable for 3 years running.

We also managed savings against some budget lines which we are reinvesting these in areas of core service delivery. Support functions are being redesigned and workforce numbers are being managed with unprecedented rigor. In a region where needs are increasing all around us, this is an achievement, which I believe, of the tallest order.

Indeed, as we move forward and begin implementing reforms contained in our Medium-Term strategy for 2016-2021, the situation around us is deteriorating dramatically for Palestine refugees. This is a message we hear time and time again from the refugees themselves and from host countries.

Think of Gaza, where a blockade and three consecutive wars in six years have shattered lives, infrastructure and livelihoods; and where the unemployment rate is one of the highest in the world. It is also a place where our schools receive an additional 8’000 students every year.

Consider the West Bank and East Jerusalem, where demolitions, settlement expansion, and violence are on the increase. We fear 2016 may be the worst in a four-year trend. In this regard Palestinians feel a sense of hopelessness, desperation, and abandonment, and the events that began last October in the West Bank including East Jerusalem and Gaza must be seen in this light.

Consider Syria, where the situation remains catastrophic in human terms and where we are engaged in a major humanitarian response.  Of the pre-war population of 560,000 Palestine refugees roughly 450,000 remain and 95% need emergency aid.  With millions of Syrians suffering the effects of the conflict Palestine refugees may be overlooked. And I urge the international community to address the refugee needs, symbolized by Palestinians in the devastated landscapes of Aleppo and of Yarmouk where suffering has reached new heights as battles erupted in recent weeks.

Consider also, the high cost, and this was mentioned in earlier remarks, of the courage and resolve of UNRWA’s staff: 11 colleagues lost in the 50-day war in Gaza in 2014, 16 colleagues killed since the beginning of the war, and 28 still missing.

In Lebanon Palestine refugees have the highest rate of abject poverty of all of UNRWA’s five fields. Camps are severely over-crowded, and access curtailed to the job market.  UNRWA is a critical lifeline for Palestine refugees who see our assistance as a matter of life and death. The ongoing crisis that we have in the area of hospitalization, which has caused such concern, is a stark confirmation of this reality.

A different dynamic prevails in Jordan.  Palestine refugees broadly enjoy social and economic rights, including access to public assistance. The Government has invested heavily in its services.  And quality and innovation are essential for UNRWA in Jordan, where almost 40% of the registered refugees reside.

In all these contexts, we feel the enormous and growing responsibilities on the Agency’s shoulders. UNRWA’s ability to adapt and respond is closely related to our strong presence on the ground and the ability to combine the emergency and human development modes of action, a key theme of the upcoming World Humanitarian Summit in Istanbul. And there is no better example of this than our education program. As I have mentioned, over 65 years it has given 2 million refugee students the tools to lead lives of dignity. We set an early standard with fully gender-balanced classrooms, and refugee literacy is one of the highest in the Middle East.

The half million children in our 700 schools are pursuing an education that upholds UN values and is recognized for its high quality in a recent World Bank study entitled “ Learning in the Face of Adversity: The UNRWA Education Program for Palestine Refugees”. This is the system that produced Ms. Hanan al Hroub, a refugee from Dheisheh who recently won the equivalent of the “education Nobel” prize.

Achieving such results under normal conditions would be impressive.  We have done so under military occupation, blockade, and acute conflict. And we are setting our sights higher through education reforms. Our teachers and students are revolutionizing practices in the classrooms.  A human rights curriculum pioneered by UNRWA has been taken to scale Agency-wide.

When conflict in Syria drove down enrollment from 65,000 to 23,000, we made our education programme more mobile and introduced home-based modules. 45,000 students are now receiving education in Syria and we will continue efforts to raise it further.

At times even our closest partners underestimate the scale of these achievements in education and yet none of these achievements would have been possible without the active support of Member States and other donors. And I also want to convey to you the extraordinary determination of refugee children to advance their education despite the monumental adversity they face.

I saw it in children such as young Batoul who lost her father and one brother fleeing the fighting in Syria and is now in a camp in Lebanon.  And young Ahed who spent 7 months in a coma after the destruction of her home during the 2014 conflict in Gaza, which claimed the lives of her mother and two brothers. And remarkably, these students are among the highest performing students in their respective schools and this despite the violence that has marked them so deeply.

There is also the remarkable experience of our school parliaments where students lead experiences in participation and responsibility. I have never been, I say this sincerely to you, as impressed as by the strength, creativity, independence, determination and passion for education that I see in UNRWA schools and among students.

2016 is a year in which humanitarian and development action, as well as the plight of refugees, will continue to attract much attention. Ultimately however, the important conferences we will attend will only be meaningful if the mobilization and awareness they generate lead to concrete results for people that are in great need.

Nothing is more important today than to inject life into the political processes to resolve conflicts such as between Israel and Palestine or in Syria. In the meantime, I call on Member States to renew and further strengthen their commitment to Palestine refugees and to UNRWA, the agency you mandated in 1949 for this important purpose, and to help put UNRWA on a more stable financial footing. It is a matter of dignity and of hope for the entire region.

Thank you Secretary General for being here today on this very important occasion for UNRWA.