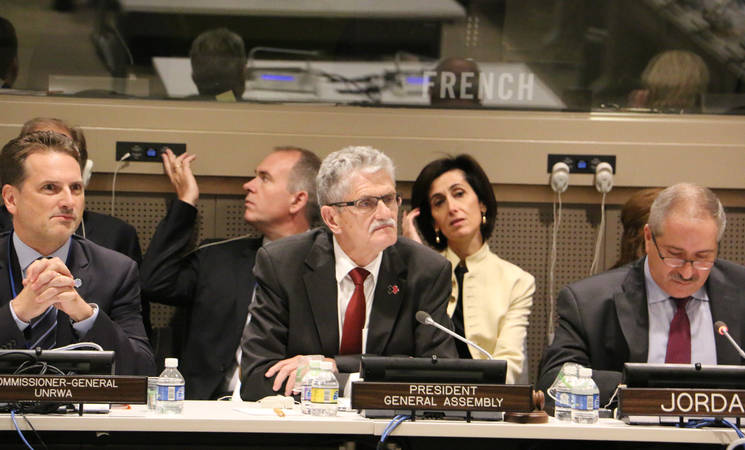 Statement of UNRWA Commissioner-General Pierre Krähenbühl at the High-Level Ministerial meeting on the financial sustainability of UNRWA held in New York City, 26 September, 2015.

It is an honour to be present at this important Ministerial-level meeting on the future of UNRWA’s financial situation. I wish to warmly thank the Hashemite Kingdom of Jordan and Sweden for taking the welcome initiative to convene this meeting, in particular after the severe financial crisis UNRWA experienced this year, which risked delaying the opening of UNRWA’s school year for 500,000 Palestine refugee boys and girls.

I wish to express my personal and deep appreciation to Minister Nasser Judeh for his commitment, outreach and sense of purpose during this crisis. Your actions, Minister, played a decisive role in overcoming our shortfall. I seize this opportunity to thank all host governments, in particular Jordan, Palestine and Lebanon, for taking a number of important initiatives in support of UNRWA.

My sincere gratitude is also offered to Minister Margot Wahlström for her passionate engagement for Palestine refugees and UNRWA. Our dialogue this summer, Minister, reflected the depth of Sweden’s support to our agency. Allow me here to thank the countries that showed strong solidarity and came forward swiftly to help us bridge the US$ 101 million shortfall to our core budget: Saudi Arabia, Kuwait, the United Arab Emirates, the United States of America, Switzerland, the United Kingdom, Norway, the Netherlands and Slovakia. In addition, I am pleased to highlight that the European Union has now confirmed its contribution. Not to be overlooked, Al-Khair – an NGO – and the Basque government also provided funds to close the deficit.

I wish to extend my heartfelt appreciation to the Secretary-General, to the Deputy Secretary-General – to you Jan – for a truly extraordinary outreach and support to UNRWA’s efforts. Equally to the Secretary-General of the League of Arab States and of the Organization of Islamic Cooperation. This entire mobilization allowed us to successfully close the 2015 gap. We are deeply grateful to all of you, as we are to all our major donors and members of the Advisory Commission for the steadfast contributions and trust over many decades.

We faced an unprecedented challenge this year. Suddenly it was no longer about abstract notions and conceptual considerations. It was about whether or not 500,000 children would start their school year on time. As for every child in the world, it was a matter of the right to education. But for Palestine refugee children it was about much more: it was about whether in addition to facing 67 years of an unresolved historic injustice, almost 50 years of occupation in Palestine, almost 10 years of a relentless blockade in Gaza, and the consequences of war in Gaza and Syria, Palestine refugees would be deprived of the UNRWA service that they cherish above any other and that is education.

Let me illustrate the importance of education for Palestine refugees. When I visited Yarmouk camp in Damascus in March this year, men and women who had survived two years of a merciless siege and bombardments and the murderous actions of armed groups spoke only for five minutes about their bare survival needs before turning to education. In the Ein El Hilweh camp in Lebanon, a school principal introduced me to a 13-year-old Palestine refugee girl from Syria. On her flight to Lebanon, she had lost a father and a brother and yet was the highest performing pupil in the school. To me she illustrates how deeply Palestinians value learning and developing skills, often against all odds, and how they seek to rebuild after so much has been lost.  I see her and others like her helping their shattered communities recover after the conflict is brought to an end.

Education is what makes UNRWA unique in many ways. When most of the time people affected in crises are seen as ‘victims’, UNRWA provides the essence of hope to Palestine refugee boys and girls and looks at people as actors of their own destiny. No wonder, therefore, that the risk to our education program was perceived as existential by Palestine refugees. I heard it in all my trips since announcing that schools would open on time and this was best expressed by an UNRWA teacher in Gaza two weeks ago when she said: “Things are so difficult in Gaza that had the school year been postponed, I would have said to my children that we had nothing else left than to jump into the sea.”

In addition to the risks to the right to education, other parameters have to be taken into consideration. Bear in mind that UNRWA is a stable, trusted and effective service provider in a region where public institutions are under pressure or even at risk of collapse. So, for the past nine months I have been underlining to interlocutors in many of your capitals and beyond the risks that 500,000 children out of school would represent in the unstable Middle East. Far too tempting for many radical groups, including ISIS. As one refugee said in Homs recently, “When you close a school, you open a prison.”

I have also suggested that if schools did not open on time or at all, the number of Palestine refugees leaving the region would increase, leading to more people seeking better prospects elsewhere, including in Europe. We heard such alarming messages from refugees themselves, from host governments and from several member states.

This is why your support was so essential in enabling us to open the school year on time. This should also be the key driver of our collective determination and effort to avoid that UNRWA’s education programme and other key services – health care, relief and social services – ever be at risk in the same way again. This is why it is so important that we are here together today: to talk about how to place UNRWA on a more stable financial footing in the future.

Needs in today's unstable Middle East have been growing at a faster pace than your important financial contributions to our core human development and emergency budgets. But improved financial stability can be attained. This requires a combination of measures, and UNRWA is determined to making an active contribution towards that objective. Just as we first took internal cost-cutting measures this summer before approaching donors to ask for additional support, we are currently using the planning and budgeting process to identify significant savings and cost reductions in how services are delivered (administration, procurement, etc.) as well as by implementing reforms identified in our Mid-Term Strategy 2016-2021.

Our initially projected shortfall for 2016 stood at US$ 135 million. Through a combination of measures both on expenditure and income levels, UNRWA aims to bring this initial figure down to US$ 81 million, although some of the savings and efficiency measures will not materialize until after 2016. Already we are very close to achieving this goal, which would mean that for the first time in ten years, we will have a zero-growth budget and in fact we will have contained costs over the previous year.

To begin 2016 with the same, or I hope a lower, shortfall than 2015 is a significant accomplishment.  Major internal mobilization and determination will be required. This is not the end of the road, however, and will not come without reactions. We must find more effective ways to communicate to our staff and Palestine refugees that these steps aim to stabilize and protect the delivery of core services. We see it as our responsibility to move forward on this basis and to do so in a way that preserves the trust of refugees.

For the rest of the amount we will need your active and strong support. I would be very grateful if the additional level of support mobilized this summer could be preserved for our human development requirements in 2016 and beyond. I would also appeal for support to UNRWA in reaching out to new funding streams in the form of education or other trust funds, World Bank support, etc. or to explore the possibility of assessed contributions. I call on more member states to support UNRWA’s important mission.

At a time when the world is about to embark on a new sustained effort to eliminate poverty and reduce inequality, with the objective of leaving no one behind – including refugees and displaced people – to build a world with equitable and universal access to quality education, health care, safe drinking water, etc., there is all the more reason to support UNRWA, a UN Agency which has, for 65 years, been delivering services aimed at meeting these goals. A weaker UNRWA would therefore not only be destabilizing in a region in turmoil but also in contradiction with the aspirations of SDGs 2030 and the need to protect the hard won development gains of Palestine refugees.

UNRWA’s contribution to stability and dignity is essential in that context. We carry out vital activities in Syria and Gaza, Jordan, Lebanon and the West Bank for 5 million Palestine refugees who have been waiting for an elusive political solution. Their hope and patience are running out. Last week in Syria, I met countless families now actively considering the dangerous option of fleeing abroad, over the 40 checkpoints on the way to Turkey and across the Mediterranean. We must preserve the ability of families of Palestine refugees to make the choice to stay in the region and to avoid that they become easy prey for radical groups and traffickers. As one UNRWA staff appealed to me, "Let us do more to help protect and assist people here, before there is no one left to protect."

The fact that we are all together in this room today exemplifies a shared determination to achieve this. It is our human imperative. It is what UNRWA stands for.