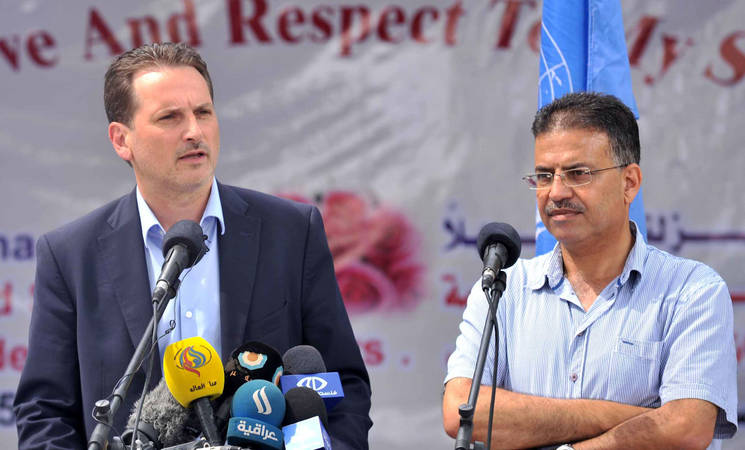 Statement of Pierre Krähenbühl, Commissioner-General of UNRWA, on the opening of the school year in Gaza, Abu Tai'ma school, Khan Younis

I am glad to be here, in Khan Younis, on such an important day: the opening of the school year.

Thanks to the active coordination with the Ministry of Education, schools are opening again today in Gaza, after 50 days of brutal conflict, of death, destruction and massive displacement, including to many of our schools, and a ceasefire of barely a few weeks.

As we start the school year, let us first join together in honoring the memory of the 500 children killed during the conflict - an average of ten a day. Let us remember and honor the 3,000 injured children, of which the UN believes 1,000 will have some form of physical disability for the rest of their lives. The trauma that they have endured at their young age is unimaginable. As I have said before, behind each one of these horrifying numbers and statistics are real lives and destinies torn apart by war.

This pain can neither be forgotten nor ignored. But today we stand here to provide a sense of hope and to make a pledge for dignity and freedom. As adults, whether teachers, parents, UNRWA staff or others we have a special duty towards the children of Gaza to help them return to the class rooms, engage in learning once again and develop skills for future opportunities.

We owe it to every child in Gaza that they may return to school and once more study Arabic, geography, mathematics and so on. Despite all the difficulties of recent months, it is time for us to give them reassurance. It is time to let the children express themselves, overcome the terrible fear they had to face; a fear that no child of their ages should have had to experience, ever. We must not let any child alone in his or her corner at this time. We must all mobilize to ensure that they are supported, listened to and encouraged.

While children are at the heart of the return to schools, so are, in a way, the school buildings themselves this year. Over 81 UNRWA schools were damaged during the conflict and over 90 served as shelters for up to 290,000 displaced people. This was five times more than the numbers during the conflict of 2008/9. Also, on 7 occasions UNRWA schools were hit by shells or other weapons during the conflict. We have called for investigations and I repeat this call here today. The fact that schools are reopening today will not mean that the shelling of our schools will be forgotten. I am committed to keeping these incidents and the calls for accountability high on the agenda.

This year, for the children and teachers here in Gaza, returning to school, will and cannot not be business-as-usual. Children have been severely affected by their experiences and as such need to be supported in the transition back to school. UNRWA has employed hundreds of psycho-social counsellors who have already been working round the clock to deal with the parents, with the children, with families as a whole who are emerging from a conflict that has taken such a tragic toll, both physical and psychological. Our dedicated staff have prepared well over a hundred schools for the start of the academic year. Some of them are still sheltering thousands of displaced people.

Learning from experiences in other conflict environments, our education department has taken certain special measures for this delicate phase. Nine out of ten schools will operate on a double-shift basis. There will be three phases: a week of psycho-social work, several weeks of learning activities and then a transitional period into a resumption of the normal curriculum. Children in Gaza will be competing with children in the West Bank in public exams, so no time can be lost in this already delayed school year.

I am grateful to the UNRWA teams, in particular the Education departments here in Gaza and in Amman for working so hard to have the schools reopen for 241,000 children so soon after the end of the conflict. I also thank the laborers, teachers, counsellors and workers for their dedication. UNRWA staff are parents themselves and have carried much pressure in recent weeks. 11 colleagues have lost their lives, several teachers and principals among them.

We are aiming to move the schools away from grounds of suffering and despair to once again being grounds of learning and hope, where the skills of each and every of the nearly  one quarter of a million children in Gaza can be developed and stimulated. It has been and it will be a tough process. But our commitment is unwavering.

I pay tribute to the parents and here I speak as a parent myself. The greatest challenge for any parent is to have seen the suffering of their child and to have felt at times powerless. Today I wish to express my greatest admiration and respect to all the parents of Gaza. This is a time when you can make a huge difference for your children by encouraging them to return to school and study well. UNRWA and in particular our teaching staff are with you. We are with you as you and your families continue on this long and difficult journey.

Finally I would like to thank our partners such as UNICEF, UNESCO and NRC for the excellent coordination that has enabled us to be ready to open the schools in Gaza.

Let me share two final observations with you. Education is central in the development of our personalities, in the ability to think independently and critically and in acquiring important skills for our lives. This is something that Palestinians have long understood and invested in. It is also a crucial element in the process of shaping identities, both individual and collective. It helps shape an awareness of who one is and what one belongs to. Every child returning to school today should feel proud to be Palestinian.

Education is also in many countries of the world a crucial tool in overcoming isolation, exclusion and humiliation. The school children of Gaza must not only be given the opportunity of returning to school but, the day they graduate, they should enjoy the same freedoms and employment opportunities as is the case in many parts of the world. This requires addressing the underlying causes of the occupation and the blockade and, I repeat, my call for it to be lifted so that the future of the children of Gaza may be one of promise, of respect of rights and of dignity.