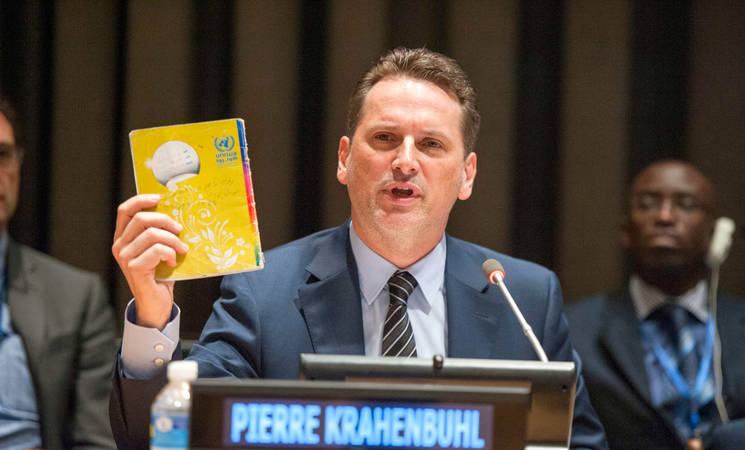 To begin with, allow me to thank the PGA and the SG for their comments.

It is a privilege to see UNRWA honored today in the presence of Member States of the General Assembly of the United Nations which created us under Resolution  302 (IV) of December 1949.  Six months later, in May 1950, we were delivering services to more than 700,000 Palestine refugees in what remain our five areas of operation – Jordan, Lebanon, Syria, and the West Bank and the Gaza Strip.

Most of us were not yet born then and those who were just going through their first years in school.

If you were given 30 seconds to describe landmarks of human history since 1950, what would you list? The Korean War and the start of the Cold War, desegregation in the United States, uprisings in Europe in the 1960s and in the Arab world in the 2010s, the end of colonialism and apartheid, the rise and fall of dictatorships in Europe, Latin America, Asia and Africa, the Berlin Wall built and brought down and the destruction of the towers here in New York. Genocides in Cambodia and Rwanda. Olympic Games in 15 cities and Football World Cups in 17 countries. Throughout this entire period, Palestine refugees have remained refugees.

On what it means to be a Palestine refugee today

On the achievements of the Agency

Palestine refugees today face an existential crisis on many fronts. In Palestine, they are approaching 50 years of occupation.

Being a Palestine refuge in Gaza today, means being a victim of a blockade that affects every aspect of one’s life and being dependent on food aid while being educated and wishing to be self–sufficient.

Being a Palestine refuge in Aida camp near Bethlehem today, means living under the fear of daily incursions and detentions by the Israeli Army and the anguish of denied access to opportunities.

Being a Palestine refuge in Yarmouk today, means being a resident trapped by a merciless siege and violence, deprived of regular access to water, food, electricity and basic health. When I visited Yarmouk in March, you could see the suffering and hunger etched into the people's faces.

Being a Palestine refuge in Nahr El Bared in Lebanon today means trying to cope with the frustration of still living in miserable temporary shelter eight years after the destruction of the camp.

We speak today of over 5 million registered Palestine refugees in the region. That equates to the population of Norway or Singapore.

We are sometimes told that UNRWA perpetuates the status of refugeehood. The reality is that a child of an Afghan refugee in Peshawar is a refugee even 35 years later. There is one big difference however; the day that an Afghan family decides to go home there is an independent  country called Afghanistan to go to. This is not the case for Palestine refugees.

Their isolation, exclusion and dispossession represent a time-bomb for the region, a denial of dignity and rights that must be addressed.

Reflecting on UNRWA @65 also means reviewing some of the outstanding achievements made over the decades with the support of hosts and donors and with the refugees themselves.

Since I joined UNRWA a little over a year ago, I have found deeply impressive the performance of UNRWA in times of crisis and emergencies. During the 2014 conflict in Gaza, we sheltered 300,000 displaced persons in 90 of our school buildings. We provided life saving aid to them under the extreme circumstances of war, including the shelling of 7 UNRWA schools resulting in 44 dead and over 200 injured and the placing of weapons components in 3 of our schools.

During the ongoing war in Syria, we continue to provide essential relief to hundreds of thousands of displaced from Yarmouk and many other camps. We are dealing with essential survival needs but also with education and health, where innovative ways of working have been established.

Equally significant is something that even our closest partners underestimate: the fact that with their support, UNRWA has contributed to one of the most remarkable dynamics of human capital development in the Middle East. Our health and education standards remain among the highest in the region. 700 schools run by UNRWA with 22,000 education staff for 500,000 boys and girls. An astonishing achievement. This is the equivalent of running the education services of the city of San Francisco but in areas experiencing war, occupation and blockade. 131 clinics run by UNRWA with 4,000 health staff for an annual average of 3 M people served.

UNRWA has invested in developing capacities and opportunities for Palestine refugees, against all odds. It has created a human capital that many countries in the world would today envy the Palestinians for. While Palestinians envy many others for having an independent state of their own.

These achievements come at a considerable human cost: we lost 11 colleagues in 2014 in Gaza. We  lost 14 colleagues in Syria since the beginning of the conflict and have 25 missing or detained. I believe that almost any other international agency would have suspended its operations after so many losses. UNRWA continues based on the courage and determination of its staff. I wish here to pay a huge tribute to them and in particular to our Palestinian colleagues who are on the frontline of our endeavor.

UNRWA @65 also highlights a more painful dimension: we are all witnesses to the failure to find a just and lasting solution to the plight of Palestine refugees. Nothing would be more important today, from the perspective of principle, international law and human dignity. It is also a matter of common sense in an increasingly unstable Middle East where it is time for the international community to start addressing core conflict realities through more concerted political action.

More than anything else, it is insufficient political will and action that has contributed to 65 years of UNRWA. Indeed, this is at the end of the day not about UNRWA. Even if the agency did not exist, this large-scale community of Palestine refugees, which represents over a third of the long-term refugees worldwide, would continue to exist, would have needs and expectations and would have to be supported. One cannot wish this issue away. It has to be dealt with, first and foremost as part of a political response.

I travel to many capitals and often hear how skeptical people are about the possibilities of a breakthrough. I say to them and repeat here today that skepticism is a luxury the world cannot afford. The consequences and cost in human terms are far too high and are growing exponentially. Not acting today when 65 % of registered Palestine refugees are under the age of 25, when they are educated but unemployed, determined to engage but with few prospects and limited freedom of movement to do so, will lead many to despair or increasing numbers to choose dangerous routes across the Mediterranean or beyond.

We can choose to close our eyes on this problem. But we should beware of what the landscape will look like when we reopen them.

UNRWA is resolute in wanting to provide quality services to the Palestine refugee community. However we face serious financial shortfalls on both our core and emergency activities. I call here for an urgent mobilization by the UN member states to help us address this situation. I will continue this call using all available fora, including the General Assembly, to which I report directly. UNRWA is making a determined effort to address some of its key financial problems internally but we require the support of existing and new partners. Supporting UNRWA financially should be seen as an investment in the future not as a burden.

We will also show determination in speaking out about the need to protect and promote Palestine refugee rights and dignity.  Humanitarian aid is not a substitute for the denial of dignity or rights. Palestine refugees need more than assistance. They need to enjoy the human rights that international law guarantees to all people and they need a just and solution.

Allow me to conclude with something in short supply but terribly needed for Palestine refugees: hope. In August 2014, during the war in Gaza, I visited a damaged UNRWA school and found this school book in the middle of the rubble. It belonged to Rua Khdeih, a young student aged 11. In it she had written a poem and expressed an understanding beyond her young years when she said “hope does not betray”.  When we reinaugurated the school in April, Rua read the poem. It sent a powerful message to us all. Hope will never die but it needs a serious boost.

UNRWA @65 also stands for hope. Help us keep it alive! Palestine Refugees @65 call for a solution. They have waited far too long! Help bring it about!