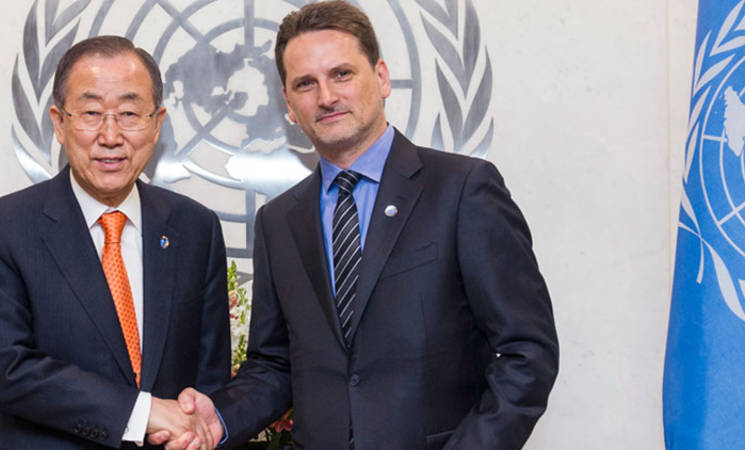 Allow me first to thank the Secretary-General for his important remarks about the conflict that has unfolded in Gaza since 8 July, and also to add my voice to the appeal of the international community to take decisive action to address the causes and consequences of this most recent round of violence.  In that regard, I convey my utmost appreciation to the President of the General Assembly for convening this informal briefing, which further advances the General Assembly’s rightful role in addressing the humanitarian needs and well-being of the refugees, and in the pursuit of a just and comprehensive resolution of the Arab-Israeli conflict including the plight of the refugees.

That role is central to UNRWA's work on behalf of Palestine refugees, through the mandate given to us by the General Assembly; I remind the Membership that, more than anyone else, it is the refugees themselves, now five-million strong, that count on your commitment to assist and protect them, a commitment you have upheld since establishing UNRWA in 1949.

In Gaza today we are experiencing the second day of the 72-hour truce, which like many others UNRWA hopes will be extended and consolidated into a lasting cessation of hostilities. It is a bitter-sweet moment. On the one hand, the fighting and killing has stopped for now and this was critically needed. On the other, it is the moment when the full extent of the staggering and frankly catastrophic human cost of the war becomes fully visible.

In excess of 1,800 people killed and 9,500 injured, many of them civilians. Up to 450,000 people displaced by the fighting or by instructions from the Israel Defence Forces. Of these, 270,000 were sheltered in 90 UNRWA schools throughout the Gaza Strip. This was over five times the number we had in UNRWA installations during the 2008/9 conflict. Nothing brought home to me the suffering and pain more vividly than my recent visit to the Al-Shifa hospital in Gaza where the broken bodies of children – some very young children – and the look of despair and powerlessness on the faces of their parents and relatives, conveyed to me once again a universal tale in war.

It was the reminder that death and injury is never and should never be allowed to be anonymous. Palestinians are not statistics.  If we had the time, Mr President, I would share with you some of the stories behind the young and older civilian victims of this conflict. Behind each and every one of them there is a personal history and destiny just as important as any of ours. This conflict has not seen only buildings and infrastructure damaged; it has seen people, families and communities torn apart. I have said previously from Gaza and repeat here that the firing of rockets by armed groups in Gaza, aimed at Israeli cities and endangering or killing Israeli civilians, was unacceptable and had to cease.

The conflict did not spare UNRWA installations and staff. Ninety of our premises have been damaged. Six of our schools were hit directly by shelling or affected by rocket fire in their immediate vicinity, with serious loss of life and injuries. This was particularly the case in Beit Hanoun, Jabalia and Rafah. We condemned such military actions by Israel explicitly and unreservedly. We cannot comprehend why they occurred, and even less why they happened so repeatedly. We have asked for investigations to be carried out and for accountability.

There were also three incidents where weapons were stored by armed groups in some of our unused schools. The world knows about these because UNRWA inspections work and because we swiftly informed everyone on the ground and in the world through our clear and deliberate public communications and condemnations of these abuses of the sanctity of UNRWA premises.

As is plain to see, the population of Gaza and the UNRWA team present on the ground have gone through a lot in recent weeks and I seize this opportunity, Mr President, to express my deepest appreciation to my UNRWA colleagues in Gaza – a full 12,500 of them – for their dedication and courage. I wish to inform you that, as of this morning, all flags across UNRWA fields and installations are flying at half-mast to honour the memory of the 11 colleagues who lost their lives since the beginning of this conflict as well as UNRWA staff who were killed in our other fields of operations, notably Syria. We are honoured and touched by the many expressions of sympathy and actions of support we have witnessed. And I am most grateful for the comments of the Secretary-General that UN Headquarters will join this initiative as of tomorrow.

Since yesterday morning, after the beginning of the truce, an estimated 100,000 of displaced people who were sheltered in UNRWA schools have started to return to their homes. They are leaving our shelters in the hope of rebuilding their shattered lives. But right now the foremost question they will face, and we will all with them, is: what are they going back to? Some will find their homes damaged others completely destroyed. They will return to neighbourhoods where there is no electricity because the Gaza power plant has been destroyed and where as a result no water is available.

These are the neighbourhoods where, despite all the difficulties, children once played in the streets and familial bonds were forged. This reminds us vividly that beyond the physical destruction, the population of Gaza will have to deal with all of the emotional and psychological scars from this and other rounds of conflict. Remember that a seven year old boy or girl in Gaza today has now experienced three successive conflicts in six years and only known life under blockade. But remember also that these scars include a powerful sense of being abandoned by the world: the failure to be protected, whether in UNRWA school buildings or beyond, will have a lasting effect on people.

Should the current cease-fire hold, the situation presents UNRWA, the wider UN family, as well as other agencies working in Gaza, with formidable human challenges to address in coming months. There will be ongoing emergency humanitarian and recovery needs for hundreds of thousands of people, be it those remaining in shelters, those going home and seeking to rebuild their lives or those having no home to go back to. This requires food aid to families unable to meet their needs, and emergency employment to inject modest resources into households whose income and savings have been utterly depleted - while also providing a labour force to contribute to the clearing and repairing of damaged infrastructure. Hygiene and sanitation are at risk throughout the densely-populated territory, and under these circumstances disease outbreaks are becoming a serious concern. I note in this regard that Gaza's rainy season is little more than two months away.

Furthermore, for UNRWA there is the pressing question of how we bring UNRWA's almost 240,000 pupils back to school at the end of this month with a public school system that is imploding. We may have to deal with a continuing use of a significant number of our schools to shelter a large population of displaced persons, as well as a pressure to accommodate children from governmental schools should these be unable to open.  In addressing these concerns, we are engaging with the Government of National Consensus at the highest levels including President Abbas and Prime Minister Hamdallah.

More widely, upcoming rapid assessments will tell us more about the extent of reconstruction needs that will need to be addressed, whether homes, public buildings or vital infrastructure.

In closing allow me to share with you my firm belief that for real progress and change to occur, a cease-fire with a return to conditions that existed in Gaza before this round of fighting will not be enough. This is time for comprehensive action to resolve the underlying issues at stake in Gaza and in the wider Israeli-Palestinian conflict.

On my very first visit to Gaza as Commissioner-General in April this year, I pointed out that the situation for the population of Gaza and for Palestine refugees was utterly unsustainable.

To be sure, Israel has legitimate security concerns that must be addressed. At the same time, the illegal blockade of Gaza must be lifted.  Until and unless that happens, Gaza – and for that matter the West Bank under occupation - will remain perpetually dependent on humanitarian assistance. As is all too well known, nowhere in the world does humanitarian assistance alone make up for the denial of dignity and rights.

I thank you Mr President.