Home » Newsroom » Official Statements » Statement of Mr. Philippe Lazzarini, The Commissioner-General of UNRWA To the 158th Session of the League of Arab States Council
Back to Newsroom

Statement of Mr. Philippe Lazzarini, The Commissioner-General of UNRWA To the 158th Session of the League of Arab States Council 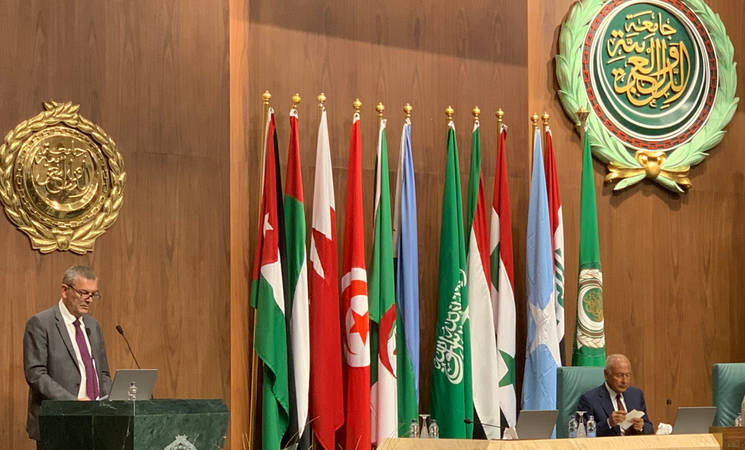 Mr. Secretary-General of the League of Arab States,

Thank you once again for giving UNRWA the privilege of addressing the League of Arab States.

Starting last week, over half a million girls and boys are going back to UNRWA schools.

Education is for most Palestine refugees the only passport to a better life.

From Ghada who is working on solar panels,

to Bara’a who is conducting research to fight cancer,

to Yasmin who opened a chocolate factory

and Wissam, who won multiple international awards for using Information Technology to enrich his students’ learning. Palestine refugees have shown that they can go very far in life!

With these achievements, there is a lot for us to be proud of.

By us, I mean UNRWA and the Arab nations who support the Agency.

I would like to pause to salute the League of Arab States for its advocacy in support of UNRWA.

Finally, let me acknowledge the relentless efforts of Jordan to mobilize support for UNRWA.

From this region, UNRWA has historically received generous financial support, especially from our longstanding strategic partners the Kingdom of Saudi Arabia, Kuwait, Qatar and the United Arab Emirates.

From this region, Palestine refugees have historically enjoyed Arab solidarity, regardless of the political dynamics at play.

I mention political dynamics because I have been told more than once that recent changes in the region will not impact the longstanding solidarity towards Palestine refugees, that it will not diminish support to the Agency that upholds so many of their fundamental rights.

Facts tell us a different story.

Financial support from Members of the League to UNRWA dropped to a historic low last year.

The overall Arab contribution in 2021 stood at slightly less than 3 per cent of our budget.

UNRWA is often the last stable pillar in a Palestine refugee’s life.

Going to school, receiving health services or a food parcel are, for many Palestine refugees, their only source of normality.

They look to UNRWA for that normality.

Last year, we welcomed the return of the United States as one of our largest donors.

European and other donors have remained steadfast in their support.

Regrettably, at the same time contributions from this region drastically dropped.

As a result, humanitarian assistance for those affected by the conflict decreased.

The quality of services like education and health are eroding.

The chronic underfunding of UNRWA is felt in every Palestine refugee household.

Governments of the Arab region continue to voice immense commitment for Palestine refugees.

Refugees hear the expressions of support and solidarity in your statements.

UNRWA receives overwhelming support through voting on its mandate at the United Nations General Assembly.

But it requires adequate resources to implement the mandate that this region, and most of the world gives it.

Political support, without matching financial resources, will not cover the cost of education to more than half a million girls and boys, access to more than 140 health centres, as well as food and cash assistance for over two million poor and conflict-affected Palestine refugees across the region.

Once again, UNRWA expects a funding gap of over US$ 100 million this year.

Year after year, our deepening financial crisis has become an “existential” threat to the Agency.

Can we, within this Assembly, muster the political and financial will to help bridge this funding gap?

As we all prepare for the United Nations General Assembly vote to extend the UNRWA mandate, let us acknowledge the collective success we see every day in our schools, health centres and vocational training centres.

And most of all: let us continue this success story until there is a fair and lasting political solution that puts an end to the plight of Palestine refugees.

Young Palestine refugees grow up listening to their parents talk about Arab solidarity and generosity.

Their parents speak with so much pride of the support they feel coming from this region.

I urge you, members of the League of Arab States, to continue extending your solidarity to them, the current generation.

It will help create hubs for Information Technology and contribute to a new generation of bright and successful professionals in fields such as medicine, technology or software development.

It means supporting one of the most successful human development stories in the region.