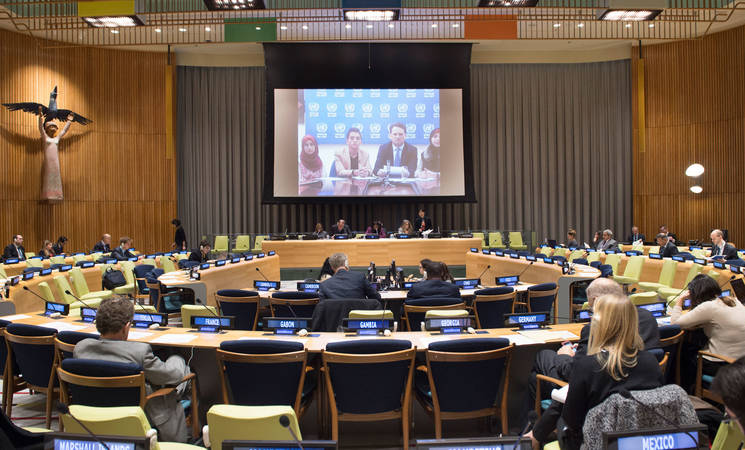 “The absence of a political horizon, often coupled with the absence of a personal horizon for Palestine refugee youth, is creating conditions that I am unable to reconcile with dignity and security of anyone in the region,” UNRWA Commissioner-General Pierre Krähenbühl told the Ad Hoc Committee of the General Assembly for the Announcement of Voluntary

Acting President of the General Assembly H.E. Dr. Mwaba Patricia Kasese-Bota, the Permanent Representative of Zambia to the United Nations,

I wish to join the Acting President of the General Assembly in welcoming you to today’s pledging conference for UNRWA. I am grateful for the opportunity to do so from the UNRWA offices in the Gaza Strip and pleased to introduce to you three UNRWA students that are here with me today: Razan, Ahmad and Rua.

At the outset, I wish to recognize the extraordinary support and efforts from so many of those present in the room in New York with you today: from hosts - Jordan, Lebanon, Syria, Palestine and Egypt, and from member states, donors and partners, including regional organizations and institutions. It is the mix of their diplomatic and financial support that has enabled UNRWA to provide its essential services and emergency response to Palestine refugees for over 66 years.

I thank all most sincerely for that.

Today, at a time of great uncertainty in the world, of devastating conflicts and violence in the Middle-East, and large-scale movements of refugees, I am often asked why the world should continue to care about Palestine refugees who, let us remember, make up the largest and most protracted refugee community in the world.

I am told that the issue is overshadowed by other crises in the Middle East and that there is a general sense of fatigue about the issue of Palestine refugees.

Of all the many questions that this situation can trigger, Ahmad here with me raised the most important one of all during the last visit of Secretary-General Ban Ki-Moon to Gaza in June this year and I would ask him to share that story with you:

[Ahmad: Good afternoon, I’m Ahmad, I’m 14 years old and I am a member of the Gaza central school parliament and attended a meeting with Mr Ban Ki Moon, the Secretary General of the UN. He encouraged us to study, to learn about human rights. That day I raised my hand and told him that we study actively in UNRWA schools, we study Human-Rights in UNRWA schools and are very interested in them. But I asked the Secretary-General also: why do these rights not apply to us? Ladies and Gentlemen, I have addressed this question with the Secretary-General, I wish to address also to you- why do these rights not apply to us?].

Thank you Ahmad, this is the fundamental question and it needs urgent answering. It goes to the heart of why a political solution is crucial. The absence of a political horizon, often coupled with the absence of a personal horizon for Palestine refugee youth, is creating conditions that I am unable to reconcile with dignity and security of anyone in the region.

None of us would accept to live for two thirds of a century in a state of limbo created by the lack of political will to resolve one of the most critical conflicts of our time. This is why the world cannot afford to forget about Palestine refugees.

To do so would be a major abrogation of the international community’s collective responsibility, which has been engaged through UNRWA since Resolution 302 of 1949 was adopted by the General Assembly.

Equally importantly: indifference would be a violation of our responsibilities as human beings to help those in distress and those left furthest behind. Could we credibly proclaim our attachment to achieving the Sustainable Development Goals by 2030 for all man- and womankind while not upholding these goals for Palestine refugees?

Indifference is not an option towards Palestine refugees in the West Bank where military rule, occupation, illegal settlements expansion and multiple restrictions  define every aspect of public and private life.

Indifference is not an option towards Palestine refugees in the Gaza Strip where 10 years of an illegal blockade and repeated armed conflicts have led to a depth of despair and psychosocial trauma that the world is seriously underestimating.

Indifference is not an option either towards Palestine refugees in Syria where the conflict has devastated camps such as Yarmouk and now Khan Eshieh; where 65 percent of the 440'000 Palestine refugees still in the country are displaced and have no idea what the future holds in store for them.

In fact, indifference towards the 5.3 M Palestine refugees is an option in none of UNRWA's fields, including Lebanon and Jordan.

Now, in light of these extreme circumstances and this being a Pledging Conference, allow me to begin by formulating UNRWA's own pledges. As Commissioner-General:

On this point, Razan wishes to share something important with you:

[Razan: My name is Razan. I’m 15 years-old and I have already seen three conflicts during my childhood. On TV, you have probably seen images of these conflicts, you may have seen my town being ruined, you have seen the explosions, you have seen the news about this mostly densely populated area in the whole world which is currently under blockade…. What you haven’t seen on TV are my dreams, my aspirations, my skills, and the potential of youth in Gaza. As the head of UNRWA Student Parliaments in Gaza, I represent the youth community here and let me tell you we are more than what you see on TV, we don’t want to be seen as victims, we are actors of change capable of contributing to a better future].

Thank you very much Razan

This is where I hope you will all join us actively.

For many years, but most acutely over the last two years, UNRWA has had to deploy limitless energy and creativity to secure the resources needed for its vital work. This at a time when the Agency has shown determination to implement very demanding reforms and management measures.

For the 2016 Program Budget, UNRWA still indeed lacks $37 million. We hope this gap will be overcome in the next few days.

Next year’s UNRWA Programme Budget will have to rise, by about 5%, to $715 million, simply to preserve our operations at their current level. Our estimate is that the gap projected between income and expenditures in 2017 will be $115 million. I must also underline that we need over 950 million for the Emergency Appeals for the oPt and for Syria and for projects such as shelter repair in Gaza and the reconstruction of Nahr El Bared camp in Lebanon.

UNRWA’s situation in 2016 would have been a lot worse had it not been for significant additional funding received from generous member states and for the resumption of funding from Canada – a very welcome development; which I am pleased here to particularly appreciate: continuing generous engagement by some Gulf countries, and robust support from our traditional large donors such as the US, the EU and its member states, as well as Japan, Norway and Switzerland. We are pleased also by the increased engagement with and from countries like the Republic of Korea, India and China and by the dialogue underway to secure a long term partnership with the World Bank.

However, since the dramatic 2015 shortfall that almost led to the postponement of the school-year, we have seen a growing consensus emerge that new funding modalities are needed to put UNRWA and its finances on a more stable footing. In this context, I welcome the positive language in the New York Declaration on Refugees and Migrants adopted on 19 September stating that UNRWA requires sufficient funding to be able to carry out its activities effectively and in a predictable manner.

I am also pleased to note, as you did Madame chair, that the 4th Committee has inserted a new provision into the annual resolution on UNRWA’s operations, which will be voted on tomorrow, requesting the Secretary General to facilitate broad consultations with Member States and others to explore all ways and means, including through voluntary and assessed contributions, to ensure that the Agency’s funding is sufficient, predictable and sustained for the duration of its mandate.

If we are to stabilize UNRWA, which plays such a pivotal role in providing services, dignity and protection to a highly vulnerable refugee population, a collective approach is going to be required with buy-in by all stakeholders. The form of that collective approach, remains to be determined but the necessity of one does not.

The world cannot afford to abandon Palestine refugees.  The stakes are too high. Pending a just solution to their plight in accordance with UN resolutions and international law, we must act decisively to uphold their rights, dignity and the quality of UNRWA services.

Allow me to conclude this statement by giving the floor to Rua. I visited her school near Khan Younis during the 2014 war. An entire section had been destroyed. In the rubble we found this schoolbook, Rua's school book. In it she had entered a poem about hope. To read it there, in the middle of the war, was both troubling and moving. Please listen to her message, it is our collective responsibility to preserve the hope that Rua speaks about:

[Rua: Thank you mister Commissioner-General, hope is a friend that never betrays you. It might go away for a while but it will always come back. Happiness is something we should not look for in the neighbors garden but take care of in our own garden

Ladies and a gentlemen, after the war in Gaza, I gave the Commissioner-General my school-book. As I have never left Gaza in my life, I asked him to carry my message of hope with him around the world. I am so proud to have delivered it to you in person today. Thank you].

Thank you so much Rua, and with that Madame chair, I hand it back to you.