Statement of UNRWA Commissioner-General to the League of Arab States 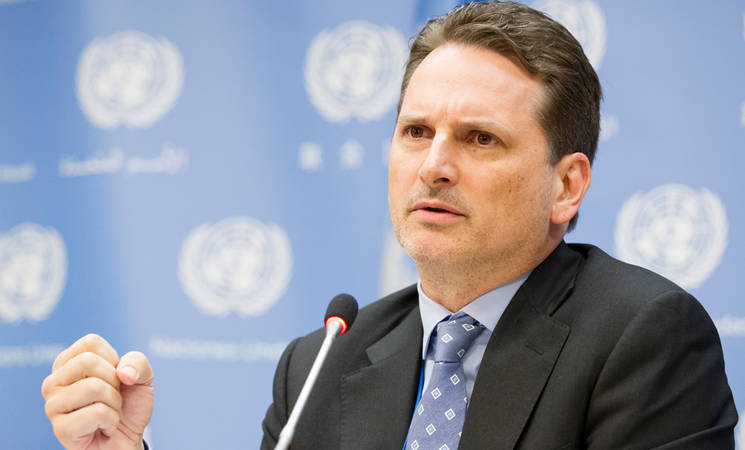 “I stand before you with an urgent and simple message: the necessity to keep alive hope and dignity for Palestine Refugees,” UNRWA Commissioner-General Pierre Krähenbühl tells the assembled delegates at the 146th session of the Arab League’s Council of Ministries of Foreign Affairs

It is a special honor to be invited to this important meeting of the League of Arab States, and I would like to express my sincere gratitude to the President, H.E. Mr. Khemaies Jhinaoui and the Secretary-General, H.E. Mr. Ahmad Abu Al Ghait, for the opportunity to address this most distinguished gathering of the League’s Council of Foreign Ministers.

I stand before you with an urgent and simple message: the necessity to keep alive hope and dignity for Palestine Refugees.

If you took a couple of minutes to reflect on all the important developments and achievements in the Arab world since the end of World War Two, what would you list?

The nationalization of the Suez Canal, the end to colonial rule and the pride that comes with independence. The establishment of the League of Arab States itself, economic, industrial, technological and social developments. And many other transformations that have taken place.

But throughout that entire period, Excellencies, Palestine refugees have remained refugees.
UNRWA is a witness to their historic injustice and has a responsibility to sound the alarm on behalf of a refugee community that is sinking into the abyss under our very watch.

And yet, time and time again, I am confronted with the question of why the world should care about the fate of Palestine refugees when there are so many other pressing issues to deal with.

The world should do so:

Because the conditions facing the 5.3 million refugees are now worse than at any time since 1948.
Because the absence of political horizon is draining them of their resolve and creativity.
Because fifty years of occupation and ten years of blockade in Palestine are etched into the soul and identity of the Refugee community.

But maybe even more importantly:

Because a young generation of Palestine refugees is growing up which is losing faith in politics and diplomacy. In the West Bank and Gaza, most young people were born after the Oslo Peace Agreement. They were told by the world that if you choose a path of moderation, there will be justice served. But it was not.

Because in Syria, young Palestine refugees, displaced, dispossessed and desperate, now understand in their hearts what their parents and grand-parents went through in 1948 and 1967.

Because, once the dust has settled from the crises of the region- and settle it ultimately will - the scars of Gaza, Hebron, East Jerusalem and Nablus, as well as the pain and suffering of Ein El-Helweh, Nahr El-Bared, Yarmouk and others, and the abuse and despair of Palestine refugees, will continue to stare the world in the face, and with greater intensity.

The risks of radicalization of isolated and desperate young people are huge. Extremists are on the constant lookout for new recruits. To date, few young Palestinians have answered their calls. But if nothing is done, that may well change. We have a collective responsibility to protect Palestine refugees from such risks and temptations.

And therefore, yes, I am convinced that renewed attention to Palestine refugees and Palestine refugee youth is urgent. It is a matter of humanity. But it is also a real investment in the stability of many areas of the Middle East. Overlooking that is a risk the League of Arab States and UN member states should not be taking.  UNRWA is making a difference in its own way, through quality education that gives youth a much better chance to build livelihoods.

Nothing is more important than recreating the essential political horizon, without which there will be no just and lasting solution for Palestine refugees.  And no less important is the dignity and respect offered by education, health care and support to lift the most vulnerable out of poverty.

As I have said to many of our partners, including in Western capitals: we can close our eyes on the denial of dignity and rights of Palestine refugees today but it will only be worse, more dramatic and more dangerous a few years down the road. And the pressure on host countries and UNRWA will have further intensified.

Therefore, I also come to you today to appeal for your robust political and financial support to UNRWA.

I wholeheartedly thank our host countries - Jordan, Palestine, Lebanon, Syria and Egypt - for their hospitality and generous support. And I thank our key donors represented here.

Our 2016 situation is once again critical, with a shortfall of $96.5 M. An hour ago, I addressed  an extraordinary meeting of UNRWA's Advisory Commission. I was explicit in lamenting the lack of collective global donor mobilization despite UNRWA's robust and decisive internal measures to reduce and control costs.

I am acutely aware that – for specific reasons of history – Arab states have long approached the humanitarian needs of Palestine refugees as a responsibility to be carried by the Western donors. This is especially the case with the Agency’s core operating budget.  But I must be clear here: with so much at stake in terms of security and stability in the Middle East, a new approach is needed.

Allow me to recall the outstanding role of the Kingdom of Saudi Arabia, the United Arab Emirates and the State of Kuwait in helping us overcome the 2015 shortfall and the risk of delaying the school year.

I kindly call for a renewal of that generosity - and the generosity of others present here - to help us close the current gap. I am in close dialogue with Switzerland, Sweden, the United States, the European Union and Canada to support us in this endeavor as well.

Beyond 2016, we need new mechanisms and approaches to find stable and adequate funding arrangements.

It is in no one’s interests to allow the Agency to suffer grave crises year after year which fuels humanitarian, political and security tensions in a region that can no longer afford them.

I ask with modesty and respect that the States represented here marshal political support through their Missions in UN Headquarters in New York to back this initiative by the host countries.

In this, the Arab states continue to have a formidable role to play and responsibility to advocate for Palestine refugees and help them overcome their critical situation.

I humbly state that UNRWA is a crucial, credible and irreplaceable partner. In the interest of all, let us act together to preserve the rights and future of Palestine refugees.

Watch a video of the statement