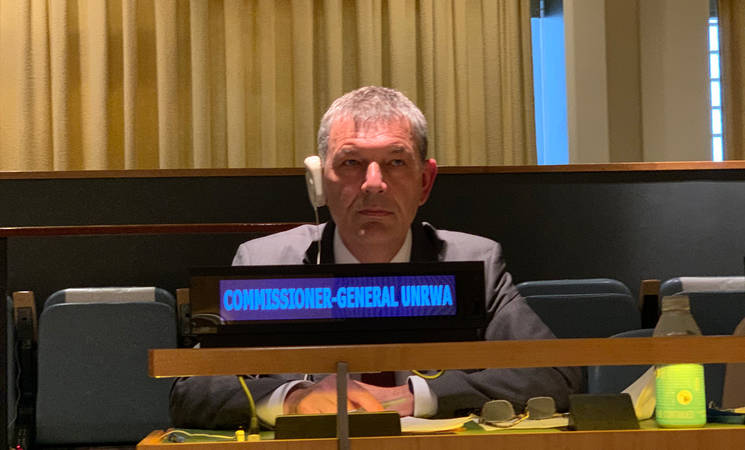 Since I last briefed this committee in November 2020, the situation in the region has continued to deteriorate. The vulnerability and needs of Palestine refugees have reached record levels.

For the first time in decades, four out of the five areas where UNRWA operates are simultaneously in crisis: Gaza, the West Bank, including East Jerusalem, Lebanon and Syria.

The conflict in Gaza last May was the fourth conflict since 2008. It compounded and accelerated human suffering. UNRWA lost 20 of its students.  Over 1,300 shelters were damaged and made uninhabitable. Psycho-social trauma, particularly among children, is acute. Poverty remains widespread. After 14 years of blockade, unemployment is skyrocketing, particularly among youth and women.

In response, UNRWA is now providing food assistance to almost all Palestine refugees in Gaza, 70 per cent of the total population.  The support of the international community to our Humanitarian and Early Recovery Appeal and the partial easing by Israel of entry of construction materials are welcome.  However, I am concerned that the humanitarian situation will continue to deteriorate in the absence of a genuine political track aimed at lifting the blockade on people, goods and trade in line with UN General Assembly and Security Council resolutions.

Tensions remain high in the occupied West Bank, including East Jerusalem. Widespread violence and excessive use of force by Israeli Security Forces have resulted so far this year in more people injured or killed than in any of the previous four years.

Settler violence is also rising in a climate of impunity, and thousands of people, including many Palestine refugees, continue to live with the daily threat of forced displacement

In Lebanon, more than half the population now lives below the poverty line, including most of the 210,000 Palestine refugees who we estimate are in the country.

Employment opportunities for Palestine refugees were already scarce before the recent crisis due to systemic marginalization.  With employment and sources of income now almost non-existent, despair, anxiety and anger are common in the camps.

Sit-ins and demonstrations in front of UNRWA premises have become frequent. Angry protests damaged our facilities in Nahr el-Bared camp recently. Violence also broke out in Ein El Hilweh camp between armed factions, impacting four of our schools.  In this dramatic context, refugees are asking for more support at a time when the Agency is facing critical challenges and funding shortages.

In Syria, the economy continues to crumble. Palestine refugees suffer shortages of food, medicine, fuel and electricity. Over 90 per cent rely on UNRWA for their basic needs.

Explosive remnants of war remain a serious security concern, particularly for children. Sadly, a 13-year-old Palestine refugee died last month in Ein el-Tal Camp in Aleppo and six of his friends were injured in the same incident.

In addition, the devastating impact of the global pandemic on the region continues and the level of vaccinations remains low.  The socio-economic impact of the pandemic hits the most vulnerable harsher.

A deep sense of abandonment dominates the Palestine refugee psyche across the region.

They have been displaced for more than 70 consecutive years with little light on the horizon.

Instead, Palestine refugees live with the constant fear that UNRWA might not be able to sustain services because of chronic financial challenges.

Sustaining quality services is becoming an impossible mission. There is a serious disconnect between the growing reliance of Palestine refugees on UNRWA services and decreased donor funding.   I have no doubt that disruptions in UNRWA services can cause a humanitarian disaster that this region just cannot afford.

To prevent such a situation, I have made it my priority to maintain all mandated services to Palestine refugees. In doing so I also made it my priority to preserve the jobs of over 28,000 personnel.  Despite growing needs in the region, I have maintained a zero-growth budget, maintained the austerity measures in place since 2015 and introduced new cost-control measures this year. With the support of donors, we have found creative ways to manage the cash flow and pay salaries on time. I have reached out to the CERF loan facility as a last resort with my assurances for timely repayment. We have deferred non-critical vendor payments, at the risk of hurting the Agency’s reputation as a trustworthy client.

To those who think UNRWA can do more to reduce its costs, let me respond:

Austerity and efficiency gains helped save over US$ 600 million in the last 6 years. But they now leave us with little to save. Any further cuts to our budget will severely affect our ability to deliver health, education, and humanitarian assistance and will jeopardize the stabilizing role that UNRWA plays in the region.

Also, long-term and continued austerity comes at a price:

Austerity causes immense distress among the Palestine refugees across the region. UNRWA is their lifeline; they see it under threat and feel deeply anxious about future international solidarity to their plight. Austerity also causes distress to our 28,000 personnel, who fear that they may suddenly lose their livelihoods.  In places like Gaza, Lebanon or Syria there are no alternative sources of income. The salary of our staff often supports multiple families.

I wish here to salute all my colleagues, from the sanitation laborers to the teachers and doctors and social workers on the frontlines to the UNRWA senior management team, for their relentlessness sense of responsibility at all times. They have demonstrated strong commitment and drive in the face of adversity and the pandemic. Switching almost overnight to remote teaching, telemedicine and food delivery showed immense agility and creativity. I wish also to recognize the extreme pressure that UNRWA personnel is under in having to address simultaneously multiple crises under exceptional circumstances.

I took a commitment upon joining UNRWA to strengthen the governance systems and help step up transparency and sound management.

Over the last year, we have strengthened the internal oversight body, made the Ethics function independent and put in place an Ombudsman. Governance structures have been reviewed to allow for increased consultations with the members of the Advisory Commission and more transparent internal decision mechanisms. I will continue to strive for the highest standards of governance, accountability, management and transparency expected by the United Nations and the Agency´s partners.

I want to take a moment to say that I am deeply proud of our education system and its results.

It enhances it by teaching human rights, conflict resolution, tolerance, and gender equality in all schools. It instills in students a deep sense of democratic values through the world-renowned UNRWA student parliament.

A recent study authored by the World Bank and UNHCR argues that the UNRWA education programme is the best value for money and our students are outperforming their local counterparts by one year of learning.  Some of these outstanding achievers include:

These are just three of thousands and thousands of eager high achievers educated in UNRWA schools.

These achievements are however under threat.

Politically motivated attacks on our education system and more broadly against the Agency are increasing in frequency and in aggressivity. Those behind these attacks do not have the wellbeing of Palestine refugee children at heart.  They aim at delegitimizing and defunding the Agency and at eroding the rights of Palestine refugees.

Let’s be clear, as Commissioner-General and UNRWA, we have a zero-tolerance policy for hate speech, incitement to discrimination, hostility or violence.

I am, however, acutely aware that we are operating in a highly divided and emotionally charged environment where zero risk does not exist.  We spare no effort to reduce the risk of violation of United Nations purposes and values to a minimum. In my 30 years of humanitarian experience, I have never seen an organization that goes to such great lengths to keep in line with UN humanitarian principles.

We review all Host countries’ textbooks to identify passages that are not in line with UN principles or values. We then train our personnel to address them critically in the classroom to help our students engage in independent thinking. Any passages that praise violence, whatever the context, are not taught.   Any guidance material that teachers produce to support distance learning during the pandemic undergoes a three-tier review to ensure it adheres to UN values and principles before it is placed on a centralized digital learning platform.  We continue to act decisively to uphold the highest UN standard.

The UNRWA mandate is to provide vital services for the wellbeing, human development and protection of the Palestine refugees.  To continue succeeding, it needs to be shielded from political attacks. Attacking and weakening UNRWA will not erase or wish away 5.7 million registered Palestine refugees. Palestine refugees’ rights are enshrined in international law and UN resolutions.  Defunding the Agency only risks provoking a humanitarian and regional security crisis.

I appeal to you today to help us to ensure our work is not politicized and stand by us when it is.

This year, our financial situation remains dramatic and uncertain. As I speak to you, we still lack the funds to operate in November and December. Furthermore, the Agency still suffers a shortfall of US$ 15 million to ensure the smooth running of its services during this month.

While I welcome the return of the U.S. this year as a partner and donor, I regret the decrease in funding by other donors.  I will continue to take all measures possible to manage the shortfall with the aim of protecting services and jobs. It is however my duty to alert you that, without proper funding, a reduction or suspension of services may need to be considered. I appeal to all Member states, particularly those who have not yet contributed and those who did not contribute to the level of previous years, to help us sustain our services.

As we work together on modernizing and strengthening UNRWA, I am grateful to Jordan and Sweden who will convene an international conference in November in support of the Agency.  It is my hope that together we can lay the foundation for an UNRWA that can effectively and fully implement its mandate as decided by the General Assembly.

Together, we will work on a business model to make funding to UNRWA predictable, sustained and sufficient. In return UNRWA will provide modern services in line with our times.

Palestine refugees consider the quality education, health services, and social protection they receive from UNRWA as a lifeline to a dignified life.  If the underfunding persists, the immense investment that we have made in the human development of Palestine refugees may start to be reversed.

Underfunding can put at risk the education of over half a million girls and boys. It can also halt the COVID-19 vaccine roll out just as the fourth wave is looming and reduce health services, including for pregnant women and new mothers. The list of risks is long, without firm commitments for sustainable and sufficient funding.

The mandate of UNRWA is a common responsibility and the stability of the region is in our common interest.

The Middle East needs a strong UNRWA as a pillar of stability.