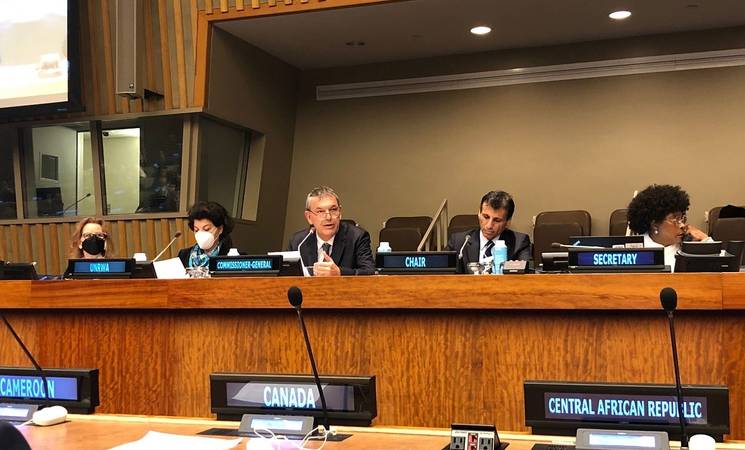 It is an honor to present to the General Assembly’s Fourth Committee my annual report on the work of UNRWA, the United Nations Relief and Works Agency for Palestine Refugees in the Near East.

The discussion we will have today will hopefully acknowledge the irreplaceable role of UNRWA, as mentioned by the Chair, and lead to a resounding vote to renew the Agency’s mandate for another three years.

Palestine refugees await with immense anticipation the confirmed support and solidarity of the international community at the General Assembly.

They await a sign of hope and a message that they are not abandoned.

Boats that sink in the Mediterranean with Palestine refugees on board are a stark reminder of the level of despair among the refugees.

This last year has been difficult for Palestine refugees across the region, with increased challenges to the fulfillment of their basic rights.

In Gaza, Lebanon and Syria 80 to 90% of Palestine refugees now live under the poverty line.

Their poverty was made worse by the socio-economic ramifications of the COVID-19 pandemic and the impact of the war in Ukraine on employment, prices and soaring inflation.

Poverty of Palestine refugees, combined with the absence of a political process and any hope for a better future is fueling distress, despair and anger.

In the West Bank, including East Jerusalem, high levels of violence impact the ability of UNRWA to deliver services.

Refugees who live in and around camps are particularly exposed to the violence. The number of fatalities this year is the highest since 2005, as reported by the UN.

In Gaza, nearly half of UNRWA students are traumatized from repeated cycles of violence and 15 years of a blockade that limits their ability to grow and engage like their peers elsewhere.

Nearly all refugees now rely on the UNRWA food basket in the Strip.

In Lebanon, Palestine refugees tell UNRWA that “anything” is better than their lives today.

They were already among the poorest, living in overcrowded camps and subject to systematic discriminatory policies.

As a consequence, deadly journeys on boats have increased, and with them, human tragedy.

There is unsurmountable pressure on UNRWA to do more.

But our financial situation is tying our hands, making us unable to support a community that has reached rock bottom.

In Syria, Palestine refugees are increasingly returning to live in neighborhoods that were razed to the ground years ago, because they have just no other options.

Every day, children emerge from the rubble to go to UNRWA schools outside the camps.

We are now seeking to rehabilitate schools and health clinics in camps like Yarmouk and Ein el Tal, where Palestine refugees are returning to live.

In Jordan, the COVID-19 pandemic has hit the economy and the job market, stripping income out of a large portion of the refugees.

Despite this difficult daily reality, UNRWA continues to make a difference in the lives of millions of Palestine refugees.

More than half a million children continue to be educated every day in over 700 UNRWA schools across the region.

Every year, our students are among the best achievers.

Ninety percent of the graduates of our vocational training centres find jobs within a year of graduating.

Over two million of the poorest Palestine refugees receive cash or food assistance.

And Last year we provided close to 14,000 loans to women to start or sustain business and become financially independent.

Our social workers supported 4,000 survivors of gender-based violence in 2021.

To do all this, we have never ceased to innovate!

The platform helps students and their parents access learning from home when schools are closed due to conflict or other crises like the COVID-19 pandemic.

UNRWA is pioneering digital health care in the developing world and is sharing its knowledge with hosts countries and with the wider development community.

Our e-health system keeps the medical records of some 2 million patients.

It allowed us to spearhead telemedicine and develop smartphone applications to support patients, including pregnant women, track their health, remind them to go to their appointments and regularly test themselves.

Global validators, including the MOPAN and the World Bank have attested to the Agency’s cost-effectiveness, efficiency and quality of services.

And Let me pause here a moment to acknowledge and pay tribute to the women and men behind these achievements and innovations, the very backbone of our Agency: the UNRWA 28,000 staff - teachers, doctors, nurses, social workers, sanitation laborers -who are delivering these services every day.

The vast majority are Palestine refugees, living through the same hardship as the people they serve.

A growing number of competing crises over the last decade has sadly increased the indifference towards the plight of Palestine refugees.

For too long, UNRWA has tried to reconcile three opposing sources of pressure:

Second, the chronic lack of sufficient voluntary funding from Member States and the unpredictable nature of most of the funding;

For far too long, the Agency has been expected to manage chronic underfunding and at the same time deliver with quality.

Today, austerity is biting at the quality of our services and undermines staff morale.

Palestine refugees witness it every day.

Over the last 10 years, and despite active and continuous outreach, an annual underfunding of around 100 million USD has forced the Agency to operate within very strict financial constraints.

The funding gap has slowed us down, especially in areas that require constant upgrading and rolling out of new models.

Today, for example, we need a substantial capital injection to implement our digital strategy, to deliver on our environmental sustainability commitments, to replace our basic assets that have become obsolete.

The size, scale and scope of our operation deserves an additional 100 million USD per year.

If anything, 100 million USD is very little in return for the protection of rights and contribution to regional stability that the Agency brings through its presence and operations.

Allow me here to acknowledge the Member States that have remained committed supporters of the rights of Palestine refugees and of UNRWA over the decades.

Without them, the Agency would not have been able to navigate the different storms.

For over seven decades, UNRWA has delivered public sector-like services to one of the most underprivileged communities in the Middle East.

The Agency is unique within the UN system as it is a direct service provider, running its own schools and primary health care centers.

It is also unique in that it relies almost exclusively on voluntary funding.

Voluntary and unpredictable resources are no way to run public-sector like services.

Over the last two years, it has been my priority to engage Member States on ways to equip the Agency with a sustainable funding base.

At the Brussels conference co-hosted by Jordan and Sweden last year, I presented a compact: a vision of a modernized Agency that operates with a three-year fixed budget.

This proposal did not yield the increased financial commitment by Member States that I had been hoping for.

This year, I initiated a dialogue to promote new ways to increase and strengthen our partnerships with UN agencies, in line with Resolution 302 and in line with repeated recommendations of our Advisory Commission.

The objective was to tap into resources available within the UN system, by asking other Agencies to deliver some services on behalf of UNRWA and under its responsibility.

Palestine refugees were concerned that reinforcing partnerships in the absence of a political horizon might further weaken UNRWA and, consequently, undermine their rights.

The UNRWA mandate is coming up for renewal and I hope it will be adopted with the same enthusiasm as in 2019.

However, this should not be a procedural rubber stamp endorsement.

It needs to be accompanied by a genuine willingness to provide the necessary predictable resources that will allow Palestine refugees to access a dignified life.

The chronic financial shortfall undermines our ability to fulfil the mandate.

The shortfall also threatens our stabilizing role in the region.

In this context, I welcome the discussions that have been led by a number of Member States on assessed contributions to cover the Agency’s operational costs.

Increasing assessed contributions is in line with the Secretary General’s earlier call in his 2017 report on sustainable financing, which was the product of consultations among Member States.

I appeal to you to support a meaningful increase in assessed contributions.

We need a contribution that will put the Agency back on sustainable financial footing to ensure that we carry out our mandate as requested by the General Assembly.

And To be meaningful, the amount must be a game changer.

Palestine refugees need to be reassured that the UN and its Members States care and remain committed to their plight.

The absence of a genuine political solution to a 74-year-old conflict means that the international community has failed to resolve it.

But we have succeeded in investing in the human development of a refugee community that has graduated brilliant achievers who regularly surprise us with their success.

When your predecessors agreed to create UNRWA in 1949, they did not know that it would last that long.

It would have been unfathomable that the descendants of those who were expelled or fled their homes would still be awaiting a solution to their plight today.

But here we are, slowly working our way towards the 75th anniversary of a UN agency that was designed to be temporary.

In the absence of a genuine political solution of the conflict, let us stay strong in our commitment to the human rights and wellbeing of Palestine refugees.

The international community might have failed them politically, but it is my hope and I appeal to you that it will continue to strongly support their human development, respond to their humanitarian needs and promote their right to a dignified life until there is a just and lasting solution to their plight.