UNRWA regrets to announce that it has cancelled the third Gaza marathon which was to be held on 10 April. This follows the decision by the authorities in Gaza not to allow women to participate.

Registered participants who still wish to come to Gaza are welcome and UNRWA is working on a programme of other events, which will be forwarded to those interested as soon as possible.

UNRWA is disappointed with this decision, and sincerely regrets the inconvenience this may cause to those who planned to participate in the marathon.

For the past three years, the annual UNRWA Gaza Marathon has raised funds for UNRWA’s summer programme for children in Gaza. In the past, local parents have praised the initiative as a welcome break from the difficulties of life in Gaza.

A total of 256 international runners had signed up so far, of which 119 are women.

In 2012, 393 Gazans participated in the marathon alongside 84 international runners.

Palestinian Olympian Nader el Masri, who has this year been helping UNRWA to train with local people, won the 2012 marathon with a time of 2 hours, 42 minutes and 47 seconds.

Show your support for the children of Gaza by making a donation to UNRWA‘s Summer Fun Weeks, for which the marathon was intended to raise funds.

We will especially target children with special needs and children living under the poverty line.

We will focus on gender balance to ensure an equal number of boys and girls participating.

Read more about the programme here.

Financial support to UNRWA has not kept pace with an increased demand for services caused by growing numbers of registered refugees, expanding need, and deepening poverty. As a result, the Agency‘s General Fund (GF), supporting UNRWA’s core activities and 97 per cent reliant on voluntary contributions, has begun each year with a large projected deficit. Currently the deficit stands at USD 67.2 million. 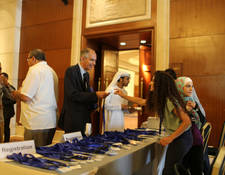 At the Advisory Commission meeting June 2015