Speaking yesterday at a meeting of the Syria Humanitarian Forum in Geneva, Switzerland, UNRWA Commissioner-General Filippo Grandi spoke of the vulnerability of the 500,000-strong Palestinian community in Syria, and called on all donors to honor the pledges they made at last months’s fundraising conference in Kuwait.

Grandi said that UNRWA would continue to operate in the embattled country, despite intense challenges. He appealed to all the parties to the conflict to respect the neutrality of the Palestinians in Syria, as well as UNRWA installations there.

The full transcript of his speech is below. 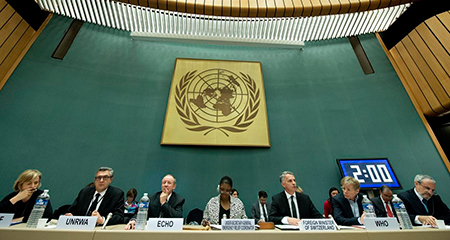 "The issue of the Palestine refugees in Syria continues to be sensitive and of concern to UNRWA. Since December, the negative impact of the conflict on Palestine refugees in Syria has increased dramatically. They continue to be one of the elements of a much larger crisis, but an element that, because of its sensitivity, needs special attention, we believe. So we are grateful for this opportunity.

There are over 500,000 Palestinians in Syria; we estimate that 400,000 now are in need of additional assistance. Bear in mind also that 63 years of investment in health, education and other services for these refugees is also being torn apart, together with entire communities, by the conflict that prevails in the country. Displacement of Palestine refugees within Syria is increasing. We estimate now that 50 per cent of the entire population has fled their homes. Camps and concentrations of Palestinians around Damascus and Dera‘a are now largely empty.

In particular, I would like to draw attention to the situation in Yarmouk, a suburb of Damascus originally hosting 150,000 Palestine refugees. We estimate that only 20,000 are left there. It is essential to restore the access of humanitarian agencies, in particular UNRWA, to Yarmouk, and to create conditions for the return of Palestinians to Yarmouk. Humanitarian space must be created, and this can only be achieved through cooperation between the parties of the conflict.

Another key problem is that Palestinians have limited external flight options. Jordan has maintained a policy of not allowing Palestinians to enter. While we appreciate the difficulties and the long history of hospitality by Jordan, we would like to appeal to Jordan to maintain the door open. We would like to praise Lebanon for having taken in almost 30,000 Palestine refugees, in spite of the incredible burden represented already by Syrians.

There is a small document outside that gives details of our operations, and our concerns.

Thank you very much."