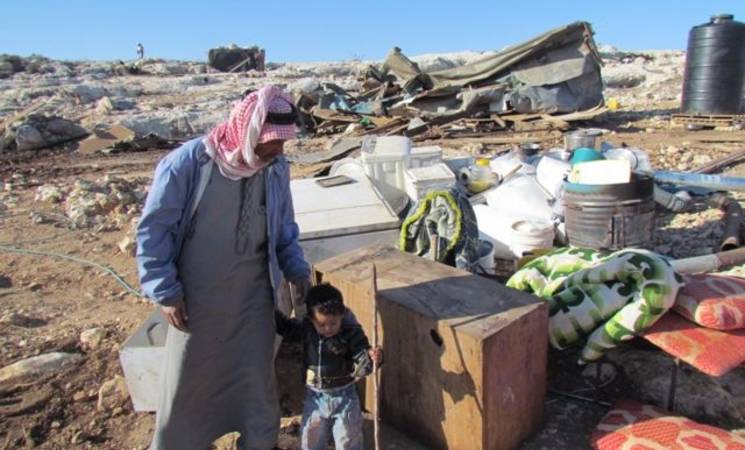 UNRWA condemns the latest demolitions in the West Bank, which displaced 68 people, the most recent of which occurred on Christmas Eve. The majority of those displaced, 46 persons, are Palestine refugees and almost half (32) are children, including a five year old girl who is paralyzed from the waist down. The demolitions took place in Ein Ayoub near Ramallah and Fasayil Al Wusta near Jericho in the Jordan valley with 61 persons displaced in Ein Ayoub, and 7 persons, all refugees, displaced in Fasayil Al Wusta.

These are Bedouin communities who managed to weather the recent snow storms. Tents have been distributed by the Palestinian Red Crescent in coordination with the ICRC but this is hardly adequate considering night-time temperatures plunge to around zero.  In addition, some 750 head of sheep and goats are without shelter at this crucial lambing season. Because of these demolitions, which violate international law, these historically self-sufficient communities have been forced to endure the pitiless seasonal weather in inadequate housing, entirely dependent on international assistance. On this day, many people around the world are celebrating family life with their children.  But thanks to the “administrative demolitions” these families have lost their homes and their livelihoods are severely threatened.

To-date in 2013, at least 1,103 Palestinians have been displaced throughout the West Bank (Area C & East Jerusalem). This exceeds the numbers of those displaced in 2012.  Of those displaced, about one third (34 percent) are refugees.  Among those displaced, at least 558 are children including 195 refugee children.  Furthermore, a total of 1,813 Palestinians including 497 refugees are affected through the loss of non-residential structures such as animal pens that support livelihoods. In total, 663 structures, including 259 residential units, were recorded demolished since the start of this year in the West Bank. At least 175 structures belonged to registered refugees. Of the total structures demolished, 565 structures 85% occurred in Area C.

Administrative demolition is not a solution for Palestinians in Area C which is under the control of the Israeli authorities. These demolitions are a common trigger of forced displacement and may amount to a forcible transfer and forced eviction under international humanitarian law and human rights law. In a statement in September, the UN High Commissioner for Human Rights Navi Pillay, said that “mass demolitions raise serious concerns about the prohibition on forced eviction under international human rights law, and Israel’s obligations to respect, protect and fulfill the rights of Palestinians to adequate housing and freedom from arbitrary or unlawful interference with privacy, family and home."

We call on Israel to abide by its obligations under international law, most particularly to ensure the humane treatment and protection of the civilian Palestinian population at all times, including through an immediate halt to administrative demolitions.