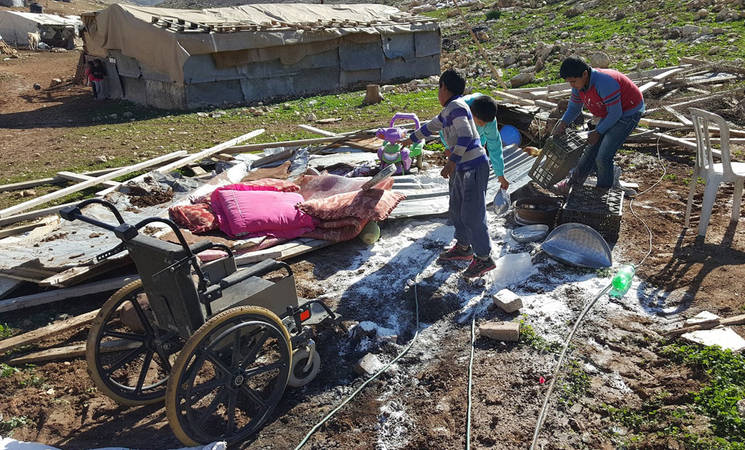 Director of UNRWA Operations in the West Bank, Felipe Sanchez, has condemned the demolition of Bedouin homes in the West Bank by the Israeli authorities. “The humanitarian consequences of this destruction of property are grave and I am seriously concerned, particularly about the children who are now homeless”, said Sanchez.

The demolitions were carried out on the morning of 6 January 2016 by the Israeli Civil Administration (ICA) in the vulnerable community of Abu Nwar, in Area C near East Jerusalem. In the midst of the winter, a total of five residential structures were demolished, leaving 26 refugees, including 17 children, displaced and without a home.

With more than 7,000 inhabitants, the majority of them Palestine refugees, Abu Nwar is one of 50 Palestinian Bedouin communities in Area C that have been slated for transfer to three proposed “relocation” sites by the Israeli authorities. The communities have refused to be relocated and have faced the daily threat of their homes being demolished.

In May 2015, the UN warned about the rapidly advancing plans to transfer the Palestinian Bedouins and the risk of demolitions after residents of Abu Nwar were informed by the Israeli authorities that they would have to move to the Al Jabal area outside of East Jerusalem, where the preparation of the ground had been taking place for several months.

Prior to and during the demolitions on 6 January 2016, residents were repeatedly informed by Israeli Civil Administration officials to move to the proposed transfer site of Al Jabal West. UNRWA has been providing urgently needed humanitarian assistance to the displaced communities.

Demolishing residential structures exacerbates an already coercive environment, driving Bedouin communities off the land they have inhabited for decades. UNRWA recalls that Israel, as the Occupying Power, has strict obligations under international law regarding the prohibition of the destruction of private property and  of forcible transfer, including as a result of policies creating a coercive environment. Forcible transfer is a grave breach under the Fourth Geneva Convention.

“The distress in the community is heartbreaking,” said Sanchez. “When children should be enjoying their holidays from school, they are instead picking up the broken pieces of their destroyed homes. How can a child grow up in such an environment? I condemn these demolitions and reiterate my call to respect the Bedouins’ decision to remain where they are,” said Sanchez. “I urge the Israeli authorities to halt all plans and practices that will directly or indirectly lead to the forcible transfer of the Bedouin.”