UNRWA deeply regrets to confirm that one of its staff members, a 34-year-old father of four, was shot dead by Israeli forces and killed instantly in an operation in Kalandia refugee camp in the occupied West Bank at approximately seven o'clock this morning. Credible reports say that he was on his way to work and was not engaged in any violent activity. He was shot in the chest. Another UNRWA staff member, a sanitation laborer, was shot in the leg during the same operation and is in a stable condition. An UNRWA investigation is ongoing.

Today’s killing took place during an incursion into Kalandia refugee camp during which three people in total were killed and about twenty injured, some of them seriously.

UNRWA condemns the killing of its staff member and calls on all sides, at this delicate time, to exercise maximum restraint and to act in accordance with obligations under international law. 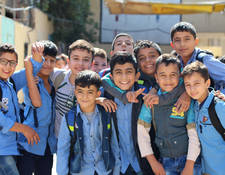 Support from the Government of Japan Employs 400 Teachers