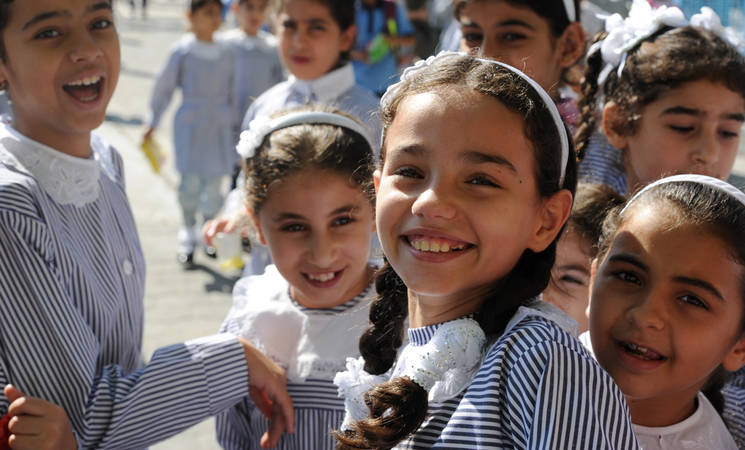 I am pleased to declare the 2015/16 UNRWA school year open. Students will return to school according to plan in Palestine on 24 August, in Jordan on 1 September, in Lebanon on 7 September and in Syria on 13 September.

I have taken this decision first and foremost because of how central education is to the identity and dignity of Palestine refugees and of the 500,000 boys and girls whose future depends on learning and developing skills in our 685 schools. It is on the benches and behind the desks of UNRWA classrooms that millions of Palestine refugees, deprived for so long of a just and lasting solution, have built the capabilities and shaped the determination that enabled them to become actors of their own destinies.

Education is a fundamental right for children everywhere in the world, and it should never have come to the point where the UNRWA school year risked being delayed because of a funding shortfall for our core budget. But it almost did. For this reason we fought very hard to create a revival of solidarity for Palestine refugees and a renewed understanding of the importance of respecting their rights and addressing their needs adequately and predictably.

For months UNRWA has been drawing the attention of the international community to the risks of neglecting the fate and plight of Palestine refugees in an increasingly unstable Middle East. Faced with the multiplicity of crises in the region, many were on the verge of purely and simply overlooking or forgetting the humiliation and despair endured for decades by Palestine refugees. UNRWA has insisted time and time again that this is a risk the world cannot take. We also heard the serious concerns expressed by host countries and the refugee community. The peaceful protests that took place over the past weeks showed solidarity and reminded the world of the importance of the work of UNRWA.

We also demonstrated strong resolve in these difficult weeks because we were not prepared to provide education services at a discount price. The UNRWA education programme is one of the best and most cost-efficient in the region. We insisted on guaranteeing students their rights, the full quality school year, and education staff their full salaries. For this, we needed to close the funding gap.

We began by taking significant internal measures to reduce costs and then engaged our partners, including host countries, member states and other donors, to overcome this major funding crisis and risk to the education programme. Our engagement included an extraordinary session of the UNRWA Advisory Commission and a special report to the Secretary-General, which was circulated to the General Assembly. The reactions and response we witnessed were remarkable. I wish to pay the warmest of tributes to a number of key countries and players involved in supporting us at this very difficult time.

We express profound appreciation to the Kingdom of Saudi Arabia, the State of Kuwait and the United Arab Emirates – whose remarkable combined contributions cover almost half of the 2015 deficit – and to the United States of America, Switzerland, the United Kingdom, Norway, Sweden and the Slovak Republic, who have together contributed generously to help address the funding shortfall.

The total amount of contributions received to date against the deficit of US$ 101 million is US$ 78.9 million (see details below). In addition to this, we welcome the efforts by the European Union to mobilize additional means in a few weeks’ time and look forward to a positive decision. We note that two other countries are still seriously considering making their own donations. . While some significant work therefore remains, I consider that we have achieved our first objective and can open the schools.

We are deeply pleased by the outcome of our efforts and the combined efforts of many partners and supporters. We extend a special message of sincere gratitude to the United Nations Secretary-General and the Deputy Secretary-General for their strong support and personal engagement. We are also very appreciative of the support of the Special Coordinator for the Middle East Peace Process and of the Under-Secretaries-General for Political Affairs and Humanitarian Affairs.

At the same time, we are in pursuit of the second crucial objective and that is to place UNRWA on a more stable financial footing for the future. UNRWA will work actively in the coming months to take further internal measures to that effect. We will also actively engage and seek the support of hosts, member states and other donors for our internal measures and to achieve the goal of better protecting our human development activities, in particular our health and education services.

UNRWA will participate in a series of important meetings with its partners, for example at ministerial-level meetings in September of the League of Arab States and at the United Nations General Assembly, to identify concrete ways to improve our future financial stability.

In our hearts, we knew that there would be no rest until the day when we could announce the opening of UNRWA schools for the 2015/16 academic year. This was a priority of the highest order for all of us in the Agency. Now we turn our energy and focus to ensure that we never again reach the stage where core UNRWA services are at risk. It is a matter of dignity and respect for Palestine refugees and their children. My determination and commitment in this regard and in protecting the mandate of UNRWA is absolute.