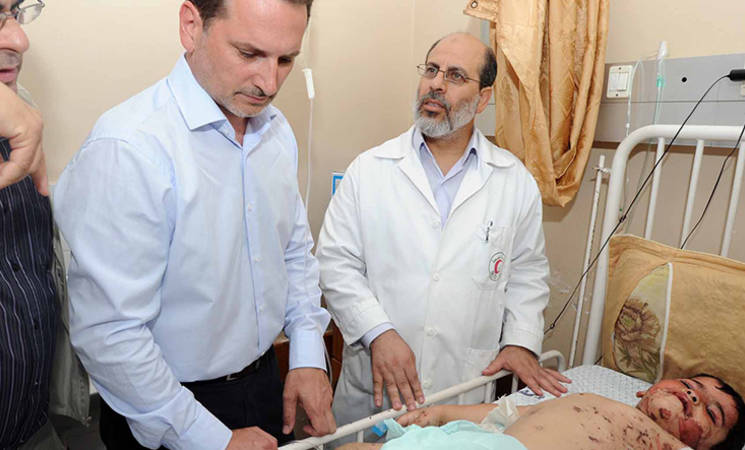 Allow me to begin by expressing sincere appreciation to the United Nations Security Council for the invitation and the honor to deliver a briefing from Gaza City today.

In this, the second of my visits to Gaza during this crisis, I have spent the last two days assessing the situation on the ground, the extent of the human suffering and the state of our operations, which continue in many parts of the Gaza Strip amidst terrible conditions resulting from the conflict that erupted on the 8th of July.  I would like, first and foremost, to express my deepest admiration to UNRWA’s staff who are providing a humanitarian lifeline to the people of Gaza. Under the truly outstanding leadership of our Director of Operations, Bob Turner, UNRWA staff in Gaza – who number over 12,000 – are assisting its people at a time of their greatest need, and doing so at considerable risk in the prevailing context.  Eight of my colleagues have lost their lives since hostilities began. In acknowledging the sacrifice, I extend heartfelt condolences to their families.

Let me not forget also to thank the rest of the UN family that is doing so much to address the humanitarian, and political, dimensions of the situation.

Since my arrival yesterday, I have borne witness to the tragic situation that has unfolded and been seen so graphically on TV screens across the globe. I have seen extensive damage done to whole neighborhoods and essential infrastructure.  I have in particular this morning seen the catastrophic human cost of this war, at the pediatric ward in the main hospital in Gaza, with broken bodies that are the real – and unacceptable – consequence of an armed conflict waged with excessive - and at times disproportionate - force in densely populated urban settings.  Among the many other children lying in the rooms and corridors was 5 month-old Yussuf who has very barely and not yet definitively survived the shelling of the UNRWA school building yesterday in Jabalya. Like many of you around the table I have children of my own and what I saw today – the terrible wounds - devastated me. I refer to young Yussuf because I have always refused anonymity in death and injury. Too often reports from war zones refer to lists of numbers. The Palestinian children I saw today are not statistics, and behind every death and injury there is a story and a destiny to be respected.

Yesterday, an elementary girls school in Jabalya serving as a designated emergency shelter for displaced people received artillery strikes, which we have assessed to have been fired by the Israeli military. The precise location and coordinates of the school were conveyed on 17 occasions to the Israeli military, including a notification that the school was sheltering displaced persons. The displaced were instructed by the Israeli military to evacuate their homes and seek shelter in premises such as ours, and I reiterate my condemnation of this attack in the strongest terms, reiterate also that it was a serious violation of international law, and call for accountability, including the immediate launching of a transparent investigation by Israel and to share its findings. We are engaged in continuous dialogue with Israel on this matter.

Speaking to many inhabitants of Gaza yesterday and today I have heard the same messages time and time again: ‘if we are not safe in an UNRWA school, we are not safe anywhere in Gaza” they say, and they add “the world has failed us, has failed to protect. Protection of civilians is an expression we do not want to hear anymore”.

I also call on all parties to respect the sanctity of UN premises and to exercise the highest precaution in the conduct of military operations that affect civilians in this region.  That the attack on the shelter in Jabalya came only 6 days after a strike on a designated UNRWA emergency shelter in Beit Hanoun, causing multiple injuries and fatalities to Internally Displaced Persons (IDPs) taking refuge there, makes the call all the more urgent.

There is another challenge in our operational field to which I want to draw attention.  On three occasions we have found in empty UNRWA facilities rockets belonging to armed groups in Gaza.  We immediately alerted all relevant parties to their existence, and we strongly condemned placement of weapons in our schools.  UNRWA is now working with UN partners to improve procedures to address such violations, in a manner that does not compromise the safety of staff or civilians, including UNRWA beneficiaries.

It should also be said that these discoveries do not in any way justify attacks on UNRWA facilities and in particular ones sheltering IDPs.  UNRWA takes robust measures to closely monitor all its facilities to which it has access in an effort to prevent misuse by combatants and other parties.

Dear Members of the Council,

Allow me to turn to the most difficult challenge facing UNRWA in Gaza today.  We are currently hosting over 220,000 internally displaced persons, a number which has grown every day of the conflict and at an accelerated pace in the last week.  This is four times higher than the peak number of displaced people during the conflict in 2008 and 2009; and I am not here referring to the tens of thousands of displaced in Gaza that have found temporary shelter with host families, rather only to those that are registered in UNRWA schools.

We are doing everything possible to provide the displaced with minimum needs – food, mattresses and blankets – but we are now into the fourth week of mass displacement in facilities unequipped to shelter large numbers for such a duration.   Conditions are increasingly dire in the shelters; there is no water for hygiene, very few showers and latrines are totally inadequate. Disease outbreak is beginning, with skin infections, scabies and others. There are thousands of pregnant women in our schools, deliveries are precarious and we are sheltering newborn infants in these appalling conditions. Our ability to mitigate this situation is of course heavily restricted by ongoing hostilities.

We are gravely concerned about this situation. Equally, we are gravely concerned about any possible additional displacement that will drive up the numbers in our shelters. With as many as 2’500 displaced people residing in schools and an average of 80 people to a classroom, we have exceeded the tolerable limit we can accommodate.  It is therefore with alarm that I have received accounts of new instructions from the Israeli military to Palestinians to evacuate the Zeitoun area of Gaza City, and areas in the vicinity of Khan Younis.
In view of these facts, and of the shelling affecting UNRWA schools on six occasions, I believe the population is facing a precipice and appeal to the international community to take the steps necessary to address this extreme situation. Should further large scale displacements indeed occur, the Occupying Power, according to International Humanitarian Law, will have to assume direct responsibility to assist these people.

Dear Members of the Council,

The new reality being created before our eyes in the occupied Palestinian territory and Israel is not sustainable under any circumstances. The humanitarian and political costs grow by the day with each death and injury, with the continuing destruction of infrastructure vital to the life of the Palestinian people in Gaza, and with the continuing violations of international law.  As I have stated on previous visits to Gaza, the rocket firing on Israeli cities and endangering Israeli civilians is unacceptable and must cease.

We all aspire to see a Middle East in which its peoples share common interests, a stake in each other’s well-being, and a commitment – as the Secretary-General recently said – to peace, justice and security for all in the region.  This cannot happen under the conditions of military occupation and those caused by the pitiless conflict now unfolding.  It is past time for an immediate and unconditional ceasefire to be agreed by the parties, as called for by the Council in its recent statement.

Allow me also to add my voice to those calling for redress of the underlying conditions that fuel this conflict and the violence that repeats itself in full view of the world. In other words, a cease-fire, while immediately required to save lives, is not enough. It is not conceivable to simply return to the situation existing before this conflict. Notwithstanding Israel’s legitimate security concerns, the illegal blockade of Gaza must be lifted.  This small territory is home to 1.8 million people who face the prospect that it will become unlivable in a matter of only a few years, unless urgent steps are taken by the international community to enable the development of Gaza and ensuring security for all in the region.

UNRWA, truthful to its mandate, will remain steadfast in its commitment and operations, whether during this terrible emergency or in the recovery phase once the fighting has ceased. But much more is required to ensure lasting peace and stability in the region.

I thank you Mr. President.