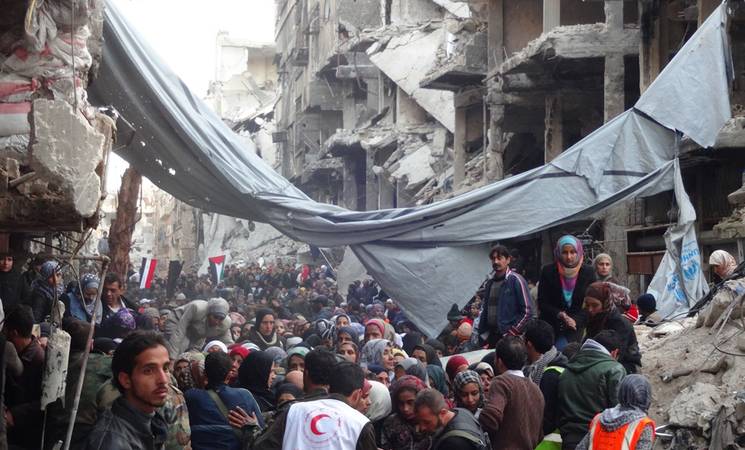 The United Nations Relief and Works Agency for Palestine Refugees (UNRWA) today distributed food parcels, bread and milk for infants to 1,026 Palestine refugee families inside Yarmouk. The distribution was halted at around 16:00 hrs due to the sound of gunfire in the immediate vicinity.

UNRWA appreciates that the support of the Government of Syria in authorizing and facilitating this accelerated distribution process.  The Agency recognizes the efforts and cooperation of GAPAR, its state counterpart, of the PLO and Palestinian leadership and the Palestinian charities that supported the distribution today.

UNRWA is encouraged that an increased number of Palestinian civilians have received humanitarian assistance today in Yarmouk. This distribution demonstrates beyond doubt that the extraordinary suffering in Yarmouk and other closed areas of Syria can be addressed if all parties to the conflict fulfill their obligations to protect civilians.

If the support of the authorities is maintained, UNRWA stands ready to immediately provide food for the entire Palestinian civilian population of Yarmouk, estimated at 18,000 people. As each food parcel contains food for an average family for only ten days, it is imperative that continuous access to Yarmouk is authorized and supported, so that UNRWA can alleviate the deep and prolonged suffering caused by lack of food in Yarmouk.

The large crowds of desperate people waiting to receive food parcels today attests to the massive needs that have yet to be met. UNRWA has received assurances that Syrian authorities will continue to facilitate and support the delivery of assistance inside Yarmouk. Given today’s events, UNRWA trusts that these assurances will continue to be translated into practical support not only for food distribution, but also for sustained, substantial, humanitarian access to Yarmouk and its civilian residents.