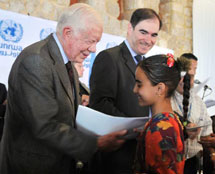 President Carter you are most welcome to Gaza and to our ceremony to award the highest achieving students in human rights from each of UNRWA’s 221 schools across the Gaza Strip.

There is so much to tell you, but so little time, on the other hand, as you are undoubtedly one of the best informed people about this conflict, I will keep my remarks brief and focused accordingly.

Today, as we celebrate the achievements of our students with their proud parents, teachers and distinguished guests, the situation in the Gaza Strip is emblematic of international political failure to uphold international law and basic Human Rights for the civilians trapped in this conflict.

86 UNRWA students were among the 313 children senselessly killed during the war on Gaza in December and January, so many lives extinguished, so many more lives destroyed and at the root of this failure is the subordination of truth and the law to rhetoric and political expediency.

As we all know only too well, establishing the facts is always a challenge in the emotively charged environment of conflict. However, it is the responsibility of those who make decisions, which have life and death consequences for the innocent, to establish the facts, no matter how difficult.

Therefore, in the view of all of us struggling to cope with the destructive and counter productive consequences of the current policies which have besieged Gaza for two years, it is essential that all policy makers, to do as you have done today, visit Gaza.

Your presence here today, President Carter, proves, that all that is needed, is the courage, the political courage, to seek and find the truth about the Palestinian people and their situation here in Gaza.

Of course, decision makers must establish the complete truth, not a partial one, therefore, it is not enough to come to Gaza but they must also go to the West Bank and to Israel. I have many times advocated that those that consider themselves the friends of Palestine should spend time in Sedrot and the other places terrorized by violence emanating from Gaza, while the friends of Israel should spend time in Gaza. Both should then return to their respective friends and be honest, starting with, explaining the self destructive nature of all illegal and inhumane actions.

The children here today, their proud parents, our wonderful staff, the representatives of the heroic human rights and civil society organizations and our distinguished academic colleagues from Gaza’s universities, all are representative of a decent and civilized society, who are being crushed under the weight of over 40 years of occupation and 2 years of blockade.

Our human rights education is central to our collective effort, to protect the values of this civilized society in the children who are its future and who are the most susceptible to the influences of their currently profoundly unjust and inhumane environment. The curriculum in UNRWA schools is built around the Universal Declaration of Human Rights, a Declaration, whose precious rights are universal in their application, but alas, not in their implementation. Although most of the basic human rights enumerated in the declaration are denied to the children and their parents here in Gaza, we are not educating the children to gown up to be consumed with the negative violent outlook of an oppressed victim.

Instead we are working hard to teach the children not just their rights but the responsibilities that go with those rights, to teach them that in fighting for justice they must respect the law, they must learn that the injustices committed by others do not justify a retaliatory illegal response. We are teaching the children to draw hope and confidence from their knowledge and understanding of the history of the struggle for human rights elsewhere in the world and to learn the most important lesson of all, and that is, that inevitably and eventually truth and justice always ultimately prevails.

Most certainly, history is littered with many egregious failures of mankind, no less so since the nations of our world adopted the Universal declaration on Human Rights over 60 years ago. However, there is hope in the triumphs for Human Rights, we can cite the examples of the demise of colonialism which has given way to self determination, apartheid which is now in South Africa’s past, there are Rwandan Genocide trials and those charged with Ethnic Cleansing in the Balkans are facing justice in the Hague, thankfully there are many more examples to inspire us.

So, while we must educate our children on the many historic failures to protect the innocent and the horrendous consequences in terms of loss of life and human suffering, we will ensure that they grow up learning from those past experiences particularly the example set by so many great leaders, who, though their actions show us the just path in the battle against oppression and tyranny, including, Ghandi, Nelson Mandela, Martin Luther King and you President Carter, you who have already done so much and who continues through your courageous efforts to be a source of hope for so much more.

I am pleased to tell you, that all of us at UNRWA are very grateful to the United States government for their longstanding and very generous funding support for our Human Rights Education program, in addition, the US government have offered to sponsor a visit of 30 of our students to the US this year, where they will undoubtedly learn even more about the global struggle for Human Rights and Democracy at the illustrious Carter Center and at the Martin Luther King Center.

As we all know very well, the assassination of Martin Luther King shares an anniversary with the Occupation of Palestine, however, the degree of liberation from the shackles of racism achieved by African Americans over the course of the last 40 years, evident in the election of President Obama, stands in stark contrast with the downward spiral of ever growing injustice suffered by the Palestinians under occupation. The words of Martin Luther King are as relevant today as they were when he first spoke them, none more apt than the powerful sentence I now quote "injustice anywhere undermines justice everywhere" end quote.

Now more than ever, is a time for honest and courageous leadership in the fight for justice for the children of Gaza, I have no doubt that in the future, children elsewhere will learn in their history books of today’s shameful oppression of Gaza’s children. However, the script which is not yet written, is who will be included on the role of honor in the restoration of basic human rights to Gaza’s children. My colleagues and I have no doubt that your name, President Carter, will be indelibly written on that roll of honor.

Your visit to Gaza today and your tireless work and that of your dedicated staff in the Carter Center, nourishes our hope and inspires our resolve to redouble our own efforts.

I thank you most sincerely President Carter for honoring us with your presence here today.