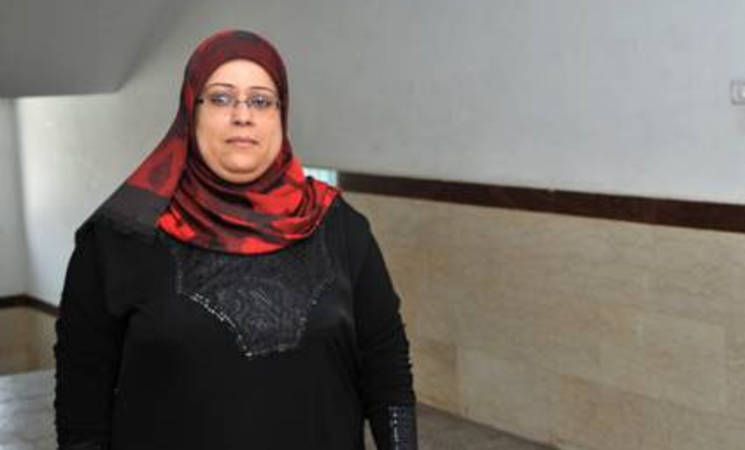 Since the beginning of May 2015, UNRWA has started to employ 21 female guards in its Health Centres across the Gaza Strip as part of the Agency’s efforts to ensure a protective environment for service delivery and enhanced gender-equity. The employees are hired through the Agency’s Job Creation Programme (JCP) and will work in their new positions for a period of three months. This is the first time that the Agency has systematically employed this many female guards.

“I am responsible for the security and well-being of the female patients. I generally observe the situation in the centre and I interfere when I think there is a problem, for example when women are approached by male patients and feel uneasy,” explained 36-year old Suhair Riyad Battah who took up her position as female guard at the Jabalia Health Centre only a few weeks ago.  Being a female guard is her first ever job and she is very pleased about it.

“It is a brilliant idea and I encourage it very much,” commented Dr. Kefah Al Najjar, the Senior Medical Officer at the Health Centre in Jabalia where Suhair is employed. “This initiative is important because it helps women to get employment and therefore dignity. It is so much better to work for your money than to just receive aid. In addition, women are also often better equipped to solve problems or assist with female patients,” she added convinced.

While male guards still watch the main gates of all UNRWA Health Centres, female guards are responsible for ensuring the safety of the staff and beneficiaries inside the facilities. Through the JCP, UNRWA tries to mitigate some of the devastating effects of the Israeli imposed economic blockade that will enter its ninth year in June 2015. The average female refugee employment rate in Gaza stood at 57.3 per cent in 2014 according to the Palestinian Central Bureau of Statistics, and according to the World Bank, Gaza has the highest unemployment rate in the world when compared to other economies.

“Because of our bad economic situation men in Gaza start to slowly understand the importance of women taking up jobs and be part of the society. I think every woman deserves that; slowly our traditional cultural expectations and prejudices are changing,” explained Kefah further. “And this does not only come from awareness raising sessions, but simply from the pure economic need,” she added.

Her new job has given Suhair strength and self-confidence. While she was shy at the beginning, she is now happy to take up responsibility and help to provide for her five children. “My husband is proud of me and my work here, and so am I. After this job, I will try to move forward and find further employment to support my family,” she said.

The UNRWA JCP in Gaza is a pivotal programme that helps to ease the impact of widespread poverty and protracted conflict by providing short-term employment opportunities to refugees. In 2014, the JCP re-expanded by almost 20 per cent, from 17,053 short term job opportunities in 2013 to 20,545 in 2014, thus benefiting almost 120,000 refugees in Gaza; in 2014, an estimated US$ 18.1 million was injected into the Gaza economy through the JCP. The focus on female employment opportunities is particularly important, since although according to PCBS data refugee female participation rate increased from 8 to 20 per cent between 2006 and 2014 (21.5. per cent for female refugees in 2014), social barriers for women are still high. If the pilot is successful, UNRWA will be looking to sustain the deployment of more female guards in suitable UNRWA facilities.