Home » Newsroom » Press Releases » “Reaching and Assisting Palestine Refugees is a Vital Imperative”: UNRWA Commissioner-General on First Visit to Syria
Back to Newsroom

“Reaching and Assisting Palestine Refugees is a Vital Imperative”: UNRWA Commissioner-General on First Visit to Syria 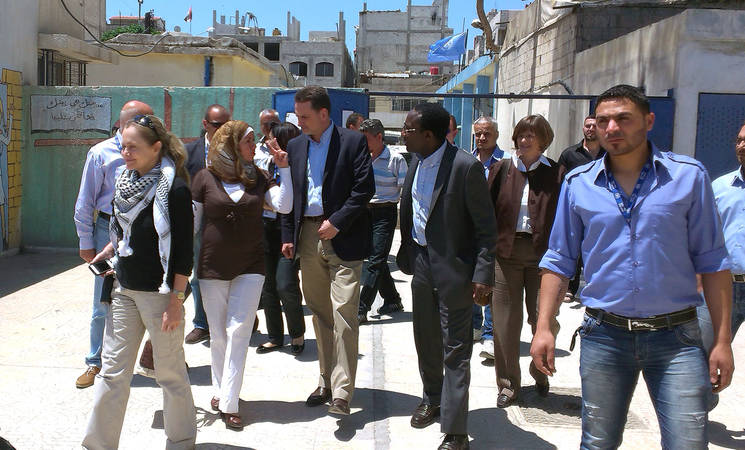 UN Relief and Works Agency (UNRWA) Commissioner-General Pierre Krähenbühl has said that Palestine refugees in Syria face extreme hardship as a result of the ongoing armed conflict. He pointed out that, in recent years, “Many refugees had, often overnight, lost everything from their homes, their livelihoods, their businesses and their hopes. In their families, they had confronted death, injury and disappearance. As another generation of Palestinians experiences the trauma of displacement, their situation has become, in human terms, nothing short of catastrophic and yet is often being overlooked.”

His comments came on his first visit to Syria as Commissioner-General, to see for himself the suffering of the Palestine refugees and to advocate for expanded humanitarian access.

“The critical imperative”, Mr. Krähenbühl emphasized, is “improved conditions to deliver the much-needed assistance to affected refugee communities. All parties must understand that safe, uninterrupted and substantial food distributions must become the norm. UNRWA must be allowed to provide medical supplies, hygiene items, water and other essential humanitarian supplies to civilians in Yarmouk, as well as in several other embattled camps and locations in the country.”

In his meetings with Government of Syria officials, including Assistant Minister for Foreign Affairs and Expatriates Hussam Eddin Alla, Social Affairs Minister and Chair of the Higher Relief Committee Dr. Kinda Al-Shammat and Director of the General Authority for Palestine Arab Refugees Ali Mustafa, Mr. Krähenbühl acknowledged the role of the Syrian authorities in enabling UNRWA to provide humanitarian assistance to the crisis-affected Palestine refugees across Syria. But he stressed that significantly more needed to be done.

In Homs in central Syria, the Commissioner-General visited UNRWA installations and met Palestine refugees who have been exposed to a multiplicity of traumas over the past three years. “We deplore the immeasurable, needless human suffering that continues to affect Palestinian and Syrian communities”, he said. Mr. Krähenbühl stressed the need “to continue UNRWA's regular services, such as the provision of health and education, adapted to the current situation of conflict, in order to strengthen the resilience of the Palestine refugees”.

In his interactions with displaced refugees now housed at two UNRWA schools in Jaramana camp, Mr. Krähenbühl listened to their stories of hardship and their feelings of loss and uncertainty. He pledged that UNRWA would continue to make every effort to support and assist Palestine refugees in this time of acute vulnerability.

Addressing UNRWA staff, mostly refugees themselves, Krähenbühl said: “I am committed to keeping the organization active and effective in providing meaningful assistance to the refugee communities and to maintaining our ability to mobilize needed diplomatic and financial support. I intend not only to work with you to improve services, but also to speak publicly about the rights of Palestine refugees including their right to a just and lasting solution.” He expressed gratitude to UNRWA staff for their commitment and for selflessly taking great personal risks to provide assistance to the refugees, often putting aside their own personal experiences and tragedies.