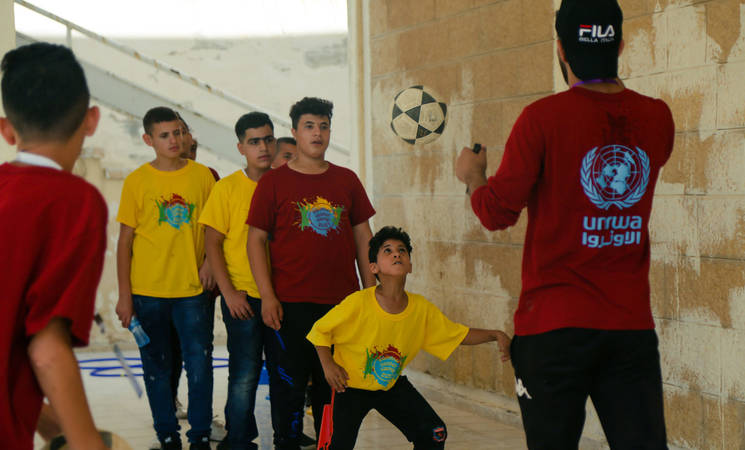 With generous funding from the UNRWA Spain National Committee, UNRWA USA and the United States Department of State, Bureau of Population Refugee and Migration, the United Nations Relief and Works Agency for Palestine Refugees in the Near East (UNRWA) organized a one-week central summer camp for 212 Palestine refugee students in sixth through ninth grade. The cohort included 155 students from the West Bank and 57 from Gaza. Every child who participated in the summer camp is enrolled in an UNRWA school, including 57 students who joined from the Gaza Strip, a majority of whom are leaving Gaza for the first time in their lives.

This year the summer camp was designed by UNRWA Education Programme to enrich the students' experiences, by giving them the opportunity to learn about Palestinian cities and interact with their peers of the same age group. The visiting students also took part in recreational activities created to address the psychological impacts of COVID-19.

Director of UNRWA Operations in the West Bank, Ms. Gwyn Lewis, took part in welcoming the visiting students and said, “It’s wonderful to see children playing and learning together in such an open and fun environment, especially after such a difficult year when children have to face the conflict in the Gaza Strip, but also the impacts of COVID-19.”

The Chief of UNRWA Education Programme, Mr. Muaweyha Amar, noted that the Central Camp is both educational and recreational and added: “Teachers and school counselors took part in conducting academic sessions aimed at enhancing our students’ life skills, and provided training on public speaking and self-empowerment. That’s all in addition to the many activities and recreational tours they enjoyed.”

Given that the camp was held during the COVID-19 pandemic, Mr. Amar confirmed that UNRWA took all necessary measures to protect the visiting students. “All of our activities were held either in open areas, or in the spacious halls of the UNRWA Ramallah Women’s Training Centre.” He continued, “Each hall host only eight students, which allowed for required social distancing. Hygiene items were also distributed upon their arrival to the West Bank.”

The Central Camp programme included a recreational trip to al-Bathan Park in Nablus and a closing ceremony where students showcased their accomplishment over the visit.

UNRWA is confronted with an increased demand for services resulting from a growth in the number of registered Palestine refugees, the extent of their vulnerability and their deepening poverty. UNRWA is funded almost entirely by voluntary contributions and financial support has been outpaced by the growth in needs. As a result, the UNRWA Programme Budget, which supports the delivery of core essential services, operates with a large shortfall. UNRWA encourages all Member States to work collectively to exert all possible efforts to fully fund the Agency’s Programme Budget. UNRWA emergency programmes and key projects, also operating with large shortfalls, are funded through separate funding portals.