Home » Newsroom » Press Releases » 300,000 Sheltering in UNRWA Schools: We Need Your Help
Back to Newsroom

300,000 Sheltering in UNRWA Schools: We Need Your Help 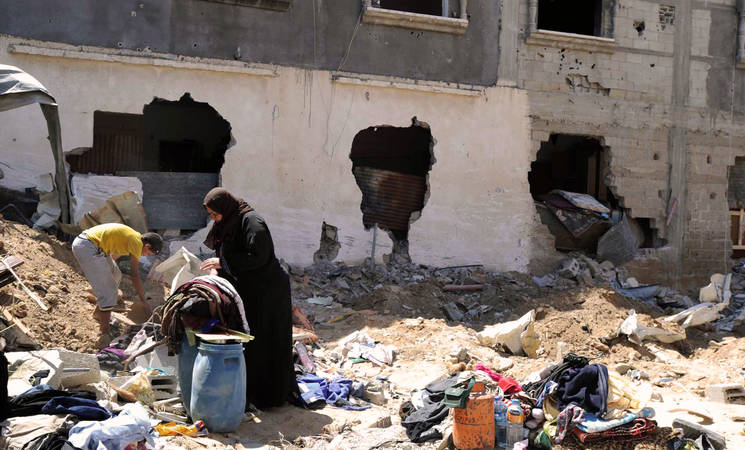 UNRWA Asks for US$ 295.4 Million in A New Gaza Emergency Appeal

There are now approximately 300,000 people crowding into 85 UNRWA schools in Gaza – a number never before seen in Gaza’s history. The collapse of ceasefire talks in Cairo on 18 August led to the seventh week of hostilities, with violence at an intensity previously only seen during the early days of the conflict. But unlike those early days, aerial bombardment is now concentrated in the west of Gaza, the location of all UNRWA emergency shelters and the bulk of the population. With the Gaza Strip effectively sealed off and the eastern side severely damaged and scattered with unexploded ordnance, people have nowhere to go.

The increasing scale of the crisis means that more civilians are relying on UNRWA for help. The Agency is now appealing for a total of US$ 295.4 million to support up to 500,000 displaced people, including more than 300,000 who are expected to continue sheltering in UNRWA schools.

Civilians caught in the ongoing violence need help to meet their immediate needs, and to support the long path to recovery that will begin when hostilities cease. The most immediate needs include food and non-food items such as hygiene kits that help prevent the outbreak of diseases. Other priorities include primary health care and psychosocial support. Almost all families in Gaza are coping with grief – including many cases in which multiple members of the same family have been killed. Extreme and continuous levels of violence have caused deep levels of fear in the population of Gaza, particularly children. Many children will bear permanent impact from the violence, with the Ministry of Health estimating that 1,000 of the 3,000 children who have been injured will suffer from a life-long disability.

An emerging priority is emergency education activities. It has been impossible for children to begin their 2014/2015 school year due to the use of UNRWA schools as shelters and the overall environment of fear and instability. It will take time and resources to return to a formal education environment. In the meantime UNRWA is implementing alternative teaching methods using new technology, the UNRWA satellite TV channel and self-learning materials.

Funds from the flash appeal will also allow UNRWA to begin recovery efforts as soon as hostilities cease. More than 20,000 homes are estimated to have been rendered uninhabitable. Vital water and sanitation infrastructure has been damaged, with at least 40 per cent of the water supply network unusable as of 22 August. With the resumption of violence, further damage is expected.

UNRWA is deeply grateful to countries and partners who have pledged close to US$150 million to date, and to those who have contributed with in-kind donations. This existing support represents about 50 per cent of the Agency’s requirements in this appeal.

UNRWA Commissioner-General Pierre Krähenbühl said, “The return to widespread violence following the recent collapse of ceasefire talks is an overwhelming tragedy for civilians in Gaza. During a week when children should have been starting their new school year, they are instead facing prolonged insecurity, fear and suffering. To make matters worse, the extensive destruction caused by the conflict means that many Palestinians will have no home to return to once hostilities have ended. Many will face a harsh winter in emergency shelters. We call on the international community to help us ensure that all affected families receive the necessary support and dignified living conditions in the midst of the tragedy caused by this conflict".