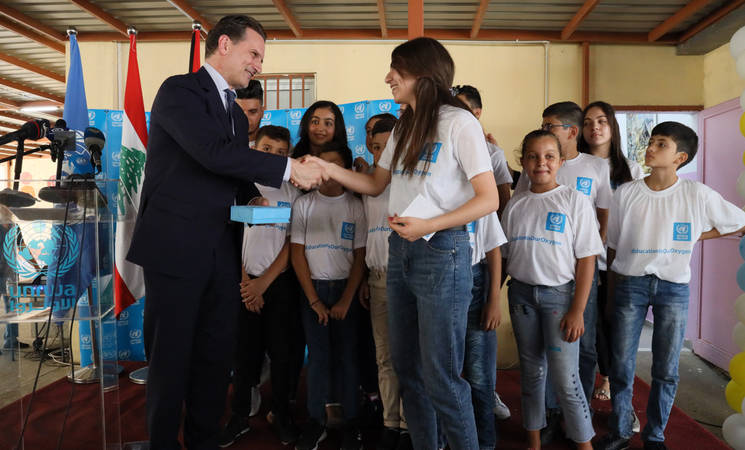 This week some 37,000 Palestine refugee girls and boys began the 2019-2020 scholastic year in the 65 schools run by the United Nations Relief and Works Agency for Palestine Refugees in the Near East (UNRWA) in Lebanon.

Representatives from the Ministry of Education and Higher Education in Lebanon and from the Lebanese-Palestinian Dialogue Committee, as well as the Palestinian Ambassador to Lebanon Ashraf Dabbour, UNRWA Commissioner-General Pierre Krähenbühl, and the Director of UNRWA Affairs in Lebanon, Claudio Cordone took part in a ceremony to mark this occasion at the UNRWA Yarmouk School in Beirut. Representatives of the European Union and UNICEF also took part in the ceremony.

During the ceremony, students from the UNRWA School Parliaments in Lebanon gave Mr. Krähenbühl a “box of dreams” to present at the upcoming United Nations General Assembly in New York. “We wrote our dreams on cards and put them all in this box,” said Balsam Wehbi. “We want world leaders to know that, like children elsewhere, some of us dream of becoming doctors, others want to be teachers, others artists and much more,” she added.

UNRWA operates 709 elementary and preparatory schools in its five fields of operation with a total of 530,000 Palestine refugee children, including eight secondary schools in Lebanon. Last week, Ismail Ajjawi, a graduate of UNRWA Deir Yassin Boys’ School in Tyre began his studies at Harvard University in Boston.

For nearly 70 years, UNRWA has preserved the right to education of Palestine refugee children and has provided inclusive and quality education, including during times of conflict, blockade and occupation, graduating some 2.5 million students from its schools since 1950.

During his visit to Lebanon, Mr. Krähenbühl will hold talks with senior Lebanese officials, the Palestinian Ambassador to Lebanon, as well as representatives of the various Palestinian factions in the country. The Commissioner-General and Deputy Commissioner-General are also participating in the Agency’s Inter-Staff Union Conference (ISUC), an annual forum where representatives of all five field offices come together to discuss challenges and possible solutions.

A strong UNRWA in a challenging world
Statement of UNRWA Commissioner-General to the Virtual Advisory Commission
UNRWA in Jordan Launch Comprehensive "Education Cannot Wait" Distance Learning Programme
An open letter from the Acting Commissioner-General of UNRWA to the Palestine refugee community
About UNRWA
Lebanon: UNRWA Humanitarian Snapshot, November & December, 2019
A Journey Into the Lives of Palestinian Refugees from Syria in Lebanon