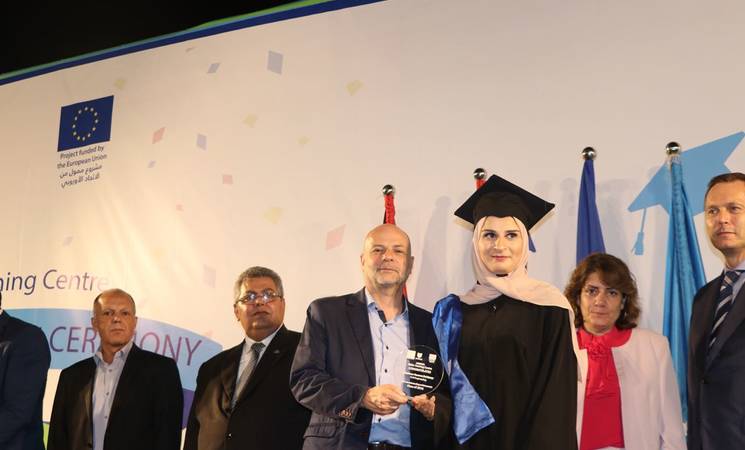 Today, UNRWA Siblin Training Centre (STC) held a graduation ceremony for the 2017-2018 academic year for some 376 students in over 19 specializations offered at the Technical and Vocational Education and Training in Beirut, Lebanon. The event was organized under the patronage of Director General of the Technical and Vocational Education and Training Programme in Lebanon, Ms. Salam Younes and the Director of UNRWA Affairs in Lebanon, Mr. Claudio Cordone and with the generous support from the European Union in Lebanon. The ceremony was attended by EU representative, Mr. Rein Nieland, as well as the representative of the Palestinian Ambassador to Lebanon, Mr. Maher Meshayel. Other guests included national and international partners, representatives of the Palestinian factions, mayors, school principals, teachers and the families of graduating students.

The Director of UNRWA Affairs in Lebanon Mr. Cordone, congratulated the students, and said: “We are proud of your accomplishments and people you have become,” adding, “this graduation comes at a time when UNRWA faces a formidable challenge in upholding its mandate and preserving key services, such as education for Palestine refugees. I would like to express our gratitude to the European Union for the reliable and continued support they provide in different fields, particularly in education, as well as the promotion of employment opportunities for Palestine refugees.”

Addressing graduates, EU representative Rein Nieland said: “I would like to commend you for your perseverance and determination to excel and wish you all the best in your future endeavours." He also commended the Lebanese government's launch of the national strategy for vocational education that sets general guidelines for intervention during the period 2018-2022."This strategy now needs a clear and detailed action plan that sequences activities and establishes indicators, costs and roles and responsibilities. The European Union is ready to help in its development."

The First Counselor of the Embassy of the State of Palestine in Lebanon, Mr. Maher Meshayel said: “I praise the strong attachment of our people to education, despite the difficult conditions they face in Lebanon. I congratulate the graduating students for their perseverance and success, and I reaffirm our support to UNRWA and the right of return.

“Speaking on behalf of her fellow graduates, Hiba Balawneh, said: “Studying at Siblin exceeded my expectations. It was an important step in my life. I hope a successful career opportunity will ensue.”

The UNRWA Medical Hardship Fund at work in Lebanon
An open letter from the Acting Commissioner-General of UNRWA to the Palestine refugee community
Sweden contributes US$ 49.4 million to UNRWA
Japan Contributes Over US$ 22.4 Million for Health, Education and Emergency Humanitarian Assistance
Lebanon: UNRWA Humanitarian Snapshot, November & December, 2019
A Journey Into the Lives of Palestinian Refugees from Syria in Lebanon
Youth Strategic Framework for Palestine Refugees in Lebanon