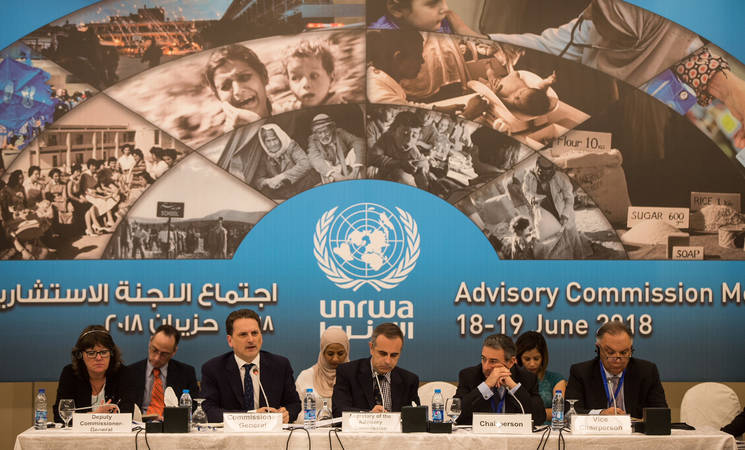 The Advisory Commission of UNRWA, the United Nations Relief and Works Agency for Palestine Refugees in the Near East, met in Jordan on 18-19 June to discuss support for the Agency, as it continues with energetic efforts to meet the needs of Palestine refugees in the Gaza Strip and West Bank (including East Jerusalem), Jordan, Lebanon, and Syria.

The Commissioner-General of UNRWA, Pierre Krähenbühl, said “It has been an extraordinarily difficult year for UNRWA and I am very encouraged by the first phase of mobilization in response to our funding crisis.  It is extremely important that, so far, we have protected the school year and other vital services.  I would like to express deep appreciation to our partners, including donors who advanced their funding for the year, and the Kingdom of Saudi Arabia, the State of Qatar, and the United Arab Emirates who between them have committed the lion’s share of additional support this year, sending a strong message to Palestine refugees and the wider international community.”

While progress is being made to address UNRWA’s needs in 2018, the Agency was very explicit with the Commission about the severity of the risks ahead with more than $250 million in further support required to preserve UNRWA’s core and emergency assistance the second half of the year.  The Commissioner-General said: “At stake is access to schooling for a generation of Palestine refugee youth; access to essential health care in and around 58 refugee camps; and emergency assistance to millions of insecure refugees in an unstable region.”

In light of the upcoming pledging conference for UNRWA in New York on 25 June, Mr. Krähenbühl insisted on the need to respect the hope and dignity of Palestine refugees, and reiterated his urgent call for all partners "to stay on a successful collective path for the sake of the Palestine refugee community.”