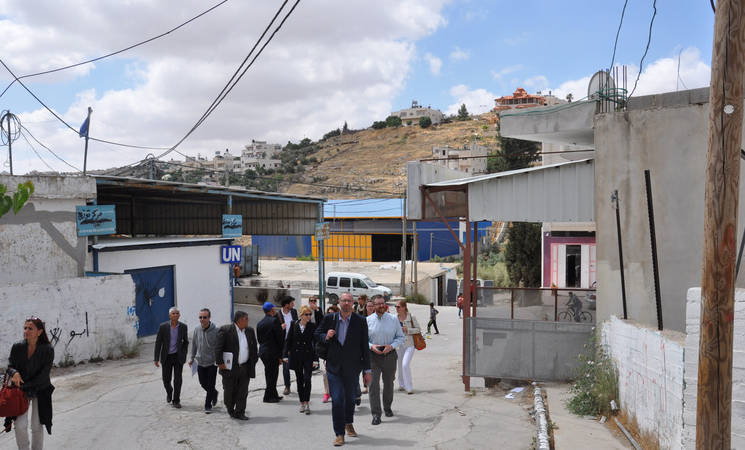 Members of the Advisory Commission (AdCom) of the United Nations Relief and Works Agency for Palestine Refugees visited a number of Palestinian refugee camps and UNRWA installations in the West Bank.

17 members participated in the Filed Visit, which began with visiting the Israeli checkpoint Gilo, located between Jerusalem and Bethlehem. They were briefed on access restrictions and the limits on freedom of movement.

The Field Visit also included a visit to Dheisheh refugee camp in Bethlehem and Fawwar refugee camp in Hebron. There the AdCom held several meetings with the local community, including the Women’s Programme Center in Dheisheh. While in Fawwar camp, the members were briefed on the situation of Palestine refugees in the camp, the impact of the camp’s proximity to nearby settlements and on the services provided to the camp residents.

AdCom members concluded their Field Visit with a visit to the Khan Al-Ahmar Bedouin community. There they held a meeting with the community representative. The community is currently faced with demolition orders and threats of forced displacement.

The Advisory Commission was accompanied by the Director of UNRWA Operations in the West Bank, Mr. Scott Anderson, as well as a number of UNRWA officials and chief area officers.

The Advisory Commission was created by UN Resolution in 1949. It is tasked with advising and assisting the Commissioner-General of UNRWA in carrying out the Agency’s mandate.