A ten-year-old Palestine refugee boy tragically lost his life when an explosive remnant of War (ERW) he was tampering with exploded on 16 August in the Masaken Hanano neighbourhood of Aleppo, in the north of Syria.

Several similar tragic ERW incidents have killed or heavily impacted Palestine refugee children in Syria over the last year.  Last March, a 17-year-old Palestine refugee also lost his life to an ERW in the old city of Aleppo. In August 2021, seven Palestine refugee boys between the ages of 10 and 14 were playing in the heavily damaged Ein el Tal Camp in Aleppo, when a nearby ERW exploded, injuring them all and killing one of them. A few weeks ago, an UNRWA school student was killed by an ERW in Dera’a.

Recreational activities are scarce for children in Syria, and Palestine refugee children who were in contact with ERW had often ventured into contaminated areas to play. Children are particularly vulnerable to these deadly explosions as they often mistake ERW or unexploded ordnance for toys, unaware of the risks.

ERW remain a source of danger for many people in Syria, particularly in areas that witnessed heavy fighting during the conflict. UNRWA urgently reiterates the need to mark, clear, remove and destroy ERW in areas where people are returning. Humanitarian demining in contaminated areas must be a priority, and UNRWA continues to prioritize ERW awareness raising in all its schools and within communities, particularly also amongst Palestine refugees who live in or voluntarily return to the heavily affected Ein el Tal, Yarmouk and Dera’a camps. 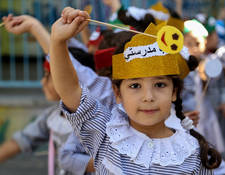 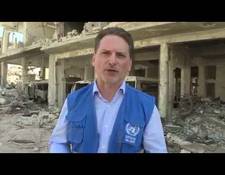