Home » Newsroom » News Releases » Back to School in Lebanon with UNRWA, UNICEF and EU
Back to Newsroom

Back to School in Lebanon with UNRWA, UNICEF and EU 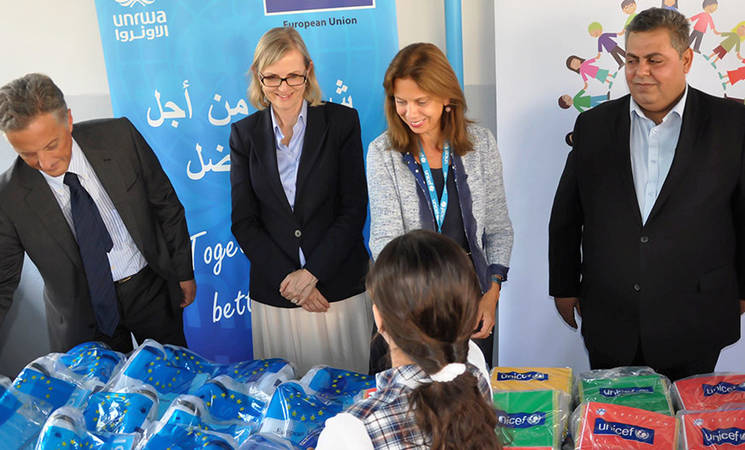 The United Nations Relief and Works Agency for Palestine Refugees in the Near East (UNRWA) held a ceremony at the Nablus Preparatory School for Girls, in Saida, Lebanon, to mark the beginning of the 2013/14 school year. In Saida, UNRWA students, including Palestine refugees from Syria (PRS), received new ‘Back-to-School’ kits from representatives of UNRWA, the United Nations Children’s Fund (UNICEF) and the European Union (EU).

The kits contain useful stationery items the students can use throughout the school year. A total of 40,000 Agency students from 69 UNRWA schools across Lebanon will receive the kits. In Saida, students received their kits from EU representative Marcello Mori, UNICEF representative Annamaria Laurini and Director of UNRWA Affairs in Lebanon Ann Dismorr.

Ms Dismorr said: “Despite the challenging situation, education must remain one of our top priorities, helping to safeguard the future of Palestine refugee children.” She thanked UNICEF and the EU for the invaluable support that had made it possible for UNRWA to respond effectively to the challenges of the ongoing conflict in Syria.

Ms Dismorr thanked UNICEF for four consecutive years of support for UNRWA education in Lebanon. The UNICEF contribution of US$ 280,000 ensured that 33,000 UNRWA students in Lebanon, along with 7,000 Palestine refugees from Syria now displaced in the country, “are provided with a positive environment and school materials,” Ms Dismorr said.

UNICEF representative Annamaria Laurini also stressed the importance of the collaboration between the two United Nations agencies. She said: “As in all emergencies, bringing children back to school as soon as possible is one of the best ways to mitigate the psychosocial impact of conflict and displacement. We are all committed to putting the most vulnerable children at the core of everything we do. This initiative today is evidence of our collective effort to ensure that the rights of all Palestine refugee children are protected.”

Mr Mori added: “In addition to the existing EU-UNRWA cooperation in the field of education for Palestine refugees, our recent contribution of EUR 6 million (US$ 8.2 million) will cover the costs of educating 6,000 PRS children for up to two years.” Mr Mori noted that the EU had provided continuous support to Lebanese efforts in response to the multiple challenges presented by the ongoing conflict in Syria. He praised UNRWA and UNICEF for their work on behalf of vulnerable groups such as Syrian refugees, Palestine refugees and Palestine refugees from Syria.

The EU and its Member States are long-standing UNRWA partners, and among the Agency’s largest donors, representing more than half of the government contributions to the Agency in 2012. Since 2005, the EU had provided EUR 23.9 million (US$ 32.5 million) in support of the Agency’s education programme. As one of the largest UNRWA partners in education and health for children, UNICEF has provided a total of US$ 1.03 million since 2011 for learning support activities, including the back-to-school kits. Education, protection and health assistance has totaled nearly US$ 1.2 million in 2013 alone.