Home » Newsroom » Press Releases » Back to School at UNRWA: Over 50% of Agency Schools in Syria Closed Due to Conflict
Back to Newsroom

Back to School at UNRWA: Over 50% of Agency Schools in Syria Closed Due to Conflict 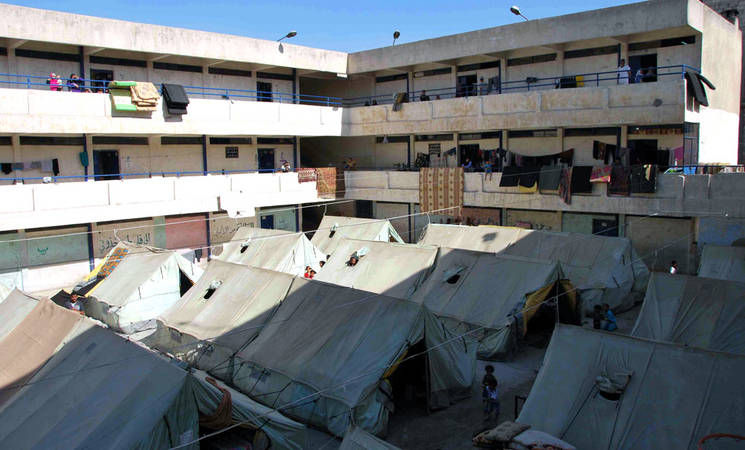 As children around the world prepare to go back to school this fall, the United Nations Relief and Works Agency (UNRWA) regrets to announce that over half of its schools in Syria have closed, affecting nearly two thirds of Palestine refugee students there.

UNRWA Spokesperson Chris Gunness said: “Whether because of damage to buildings or because of the overall insecurity, nearly two thirds of our students in Syria will not be able to return to their schools this fall. This means nearly 45,000 children have had their education disrupted, making it even harder for them to maintain a sense of continuity in a situation that is already indescribably difficult.”

Of the Agency’s 118 schools in Syria, only 49 will reopen for the 2013/14 school year. The Ministry of Education has enabled UNRWA to use 41 additional schools to help address the needs of Palestine refugee students. Other efforts to reach out to students have included the development of distance-learning materials, the delivery of TV-broadcast lessons through the UNRWA TV Channel and an increase in the number of school counsellors providing psychosocial support, but the fact remains that the doors of 69 UNRWA schools have closed.

Dr Caroline Pontefract, UNRWA Director of Education, said: “The situation in Syria is a great challenge, but it has only increased the importance of ensuring that Palestine refugees have access to high-quality and continued education. We are committed to working with host governments and other partners to make sure that we can assist Palestine refugee students and minimize major disruptions to their education.”

The effects of the conflict in Syria are being felt around the region, as thousands have fled to neighbouring countries. Around 50,000 Palestine refugees from Syria are now in Lebanon, but only 35 per cent of students have enrolled in school. In Jordan, the vast majority live in abject poverty, unable to afford even basic food items. In both cases, the influx puts greater strain on UNRWA resources.

In the West Bank, access to education continues to be threatened by demolitions and restrictive policies. Students in Gaza, where high demand means that 93 per cent of UNRWA schools already operate double shifts, struggle with poverty, emotional distress and conflict. The emergency situations throughout all five of the Agency’s fields make it particularly urgent for UNRWA to continue ensuring education services for children. Particularly in such times, education is a vital investment in the human development of Palestine refugees.