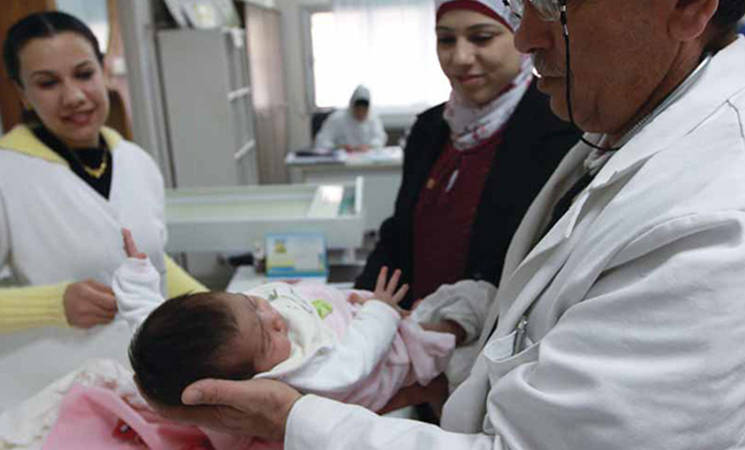 Today in Geneva, the United Nations Relief and Works Agency for Palestine Refugees in the Near East (UNRWA) launched its 2015 Annual Report of the Department of Health, which highlights the remarkable gains achieved by UNRWA in reducing mother and child deaths, infectious and communicable disease transmission, and achieving nearly 100 per cent vaccination coverage rates. This is largely due to health reforms implemented by UNRWA, in particular the Agency’s Family Health Team (FHT) model, which is a comprehensive, person-centred, and holistic primary health-care approach that focuses on family care and behavioral and lifestyle modifications.

Unveiling the report, Dr. Akihiro Seita, Director of the Department of Health at UNRWA said, “The reform, launched in 2011, is now complete in 115 of 117 health centres in four fields of operations (Gaza, Jordan, Lebanon and the West Bank), covering about 90 per cent of the served population; the reform was delayed in Syria due to the ongoing conflict, but began in four health centres in 2015. The new model of service delivery is supported by an in-house electronic medical record system – e-Health. FHT and e-Health have streamlined service delivery, reduced waiting times, and improved patient satisfaction. Average daily medical consultations peaked at 105 Agency-wide in 2012, while in 2015 they had dropped to 86; the microbial prescription rate has been steadily declining (from 27 per cent in 2011 to 23.2 per cent in 2015).”

The report commends progress made by UNRWA in improving the overall health status of Palestine refugees, but raises concerns about the increasing rates of non-communicable diseases or NCDs. Diabetes and hypertension are now responsible for 80 per cent of the morbidity and mortality among the population; a clinical audit conducted in 2015 found that more than 90 per cent of diabetes patients were obese or overweight. “NCD patients registered at UNRWA health centres reached 246,000 in 2015. Given the long-term and high cost of NCD management, these rising rates are concerning in the Agency’s current financial environment. More important, however, is the widespread poverty and poor socioeconomic status among the Palestine refugee population that supports unhealthy lifestyles and behaviours, including smoking and inactivity,” explained Dr. Seita.

“The rising rate of NCDs – coupled with troubling social and political conditions throughout the five fields of operations, including the ongoing conflict in Syria and its negative impact on neighbouring Lebanon and Jordan and continued insecurity in Palestine – create conditions which threaten to reverse historical gains in health status,” said Dr Seita. “There is a 60 per cent unemployment rate among youth in Gaza; the lack of job security and limited options for future success have widespread implications on both the physical and mental well-being of Palestine refugees. In the recent study published in 2015, the infant mortality rate among Palestine refugees in Gaza showed no decline after 50 years of steady decline, which is a major health and developmental concern.

“In 2015, UNRWA affirmed its commitment to integrating mental health and psychosocial support services into all areas of programming; however, a stable society with a healthy population is only possible when peace is achieved,” he added.

UNRWA is nearing its seventh decade of providing health, education, and relief and social services to some 5 million Palestine refugees residing in Gaza, Jordan, Lebanon, Syria and the West Bank. In 2015, UNRWA provided 9.2 million preventative and curative primary health consultations to more than 3.5 million Palestine refugees through its network of 143 primary health care centres (PHC). The Agency also provided financial support towards secondary and tertiary services, including more than 142,000 specialist consultations in 2015.

Dr. Seita concluded, “The highly dedicated health staff at UNRWA deserve recognition for their impressive efforts in some of today’s most challenging environments; together we need to support their efforts by pursuing a just and durable solution to the plight of Palestine refugees in order to ensure that refugees health is protected and the disease burden is reduced.”

Read the complete Department of Health Annual Report for 2015

Additional Information on Health at UNRWA

Agency-wide prevalence rates of diabetes mellitus and hypertension were 11.4 per cent and 17.5 per cent, respectively, for patients who were aged 40 years and older. Analysis for drugs expenditure revealed 46.0 per cent was spent on medicines for the treatment of NCD.

The total number of continuing users of modern contraceptive methods Agency-wide increased to 153,000 in 2015, an annual increase of 4.3 per cent. During 2015, UNRWA primary health-care facilities cared for about 91,000 pregnant women, representing a coverage rate of 83.4 per cent of all expected pregnancies among the served refugee population.