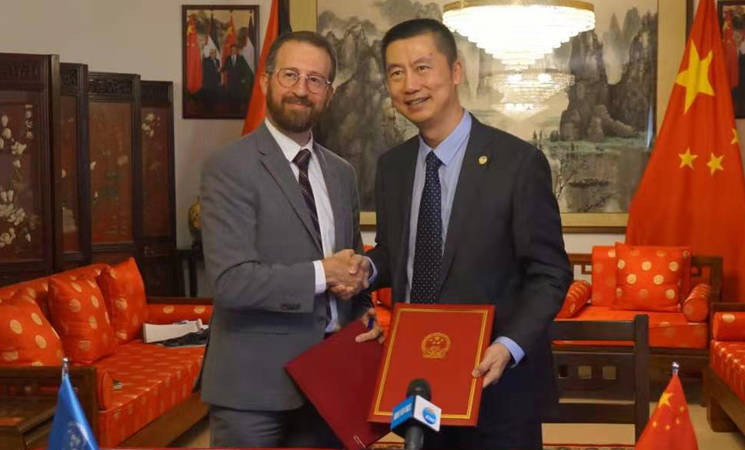 The People’s Republic of China (PRC) signed a contribution agreement for US$ 1 million with the United Nations Relief and Works Agency for Palestine Refugees in the Near East (UNRWA) in support of the Agency’s food assistance activities in Gaza. This contribution is a reiteration of China’s commitment to support the vital and life-saving services provided by the Agency to over five million Palestine refugees. Specifically, this support from China will help to avoid disruption in the delivery of essential food assistance and mitigate the severity of food insecurity facing over a million vulnerable Palestine refugees living in Gaza.

In response to this generous announcement, Mr. Marc Lassouaoui, Chief of Donor Relations said: “On behalf of the Agency, I would like to express my deep appreciation for the committed support from the Government of China to UNRWA. China’s increased contribution to the Agency in 2018 contributed significantly to helping UNRWA address an existential funding crisis. This year, with a generous contribution of US$ 1 million, China continues to demonstrate its strong and steadfast commitment to Palestine refugees, at a time when support is needed most.”

After signing the agreement, His Excellency, Head of the Representative Office, People’s Republic of China to the Palestinian National Authority, Ambassador Guo Wei said: “The Government of China supported UNRWA’s work for many years. This year, with regard to the financial difficulty UNRWA faces, China continues to support UNRWA and its work. By doing so, we believe we can support the Palestine refugees and the Palestinian cause. The Government of China will continue to support UNRWA and its work in the future.”

The People’s Republic of China has been a steadfast and valued donor to UNRWA and has greatly contributed to preserving the Agency crucial role in maintaining hope and advancing rights of Palestine refugees.

UNRWA provides life-saving services to some 5.4 million Palestine refugees registered with the Agency across its five fields of operation, including Jordan, Lebanon, Syria, the West Bank, including East Jerusalem and the Gaza Strip. Its services include education, health care, relief and social services, camp infrastructure and improvement, protection and microfinance.