Home » Newsroom » Press Releases » China contributes US$ 300,000 to UNRWA in support of human development programmes for Palestine refugees
Back to Newsroom

China contributes US$ 300,000 to UNRWA in support of human development programmes for Palestine refugees 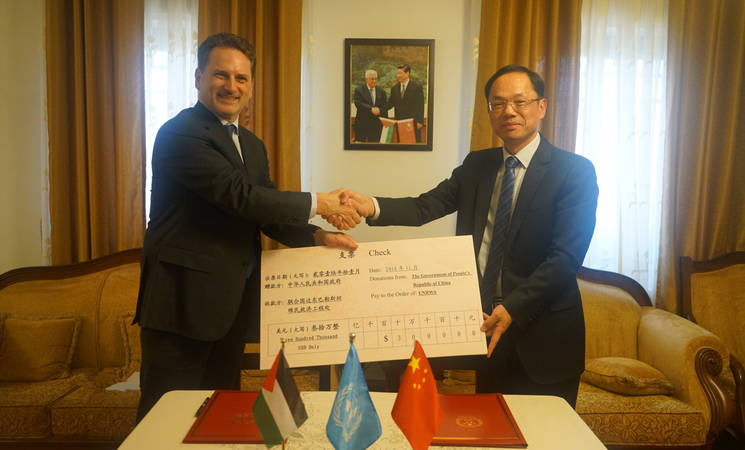 The Government of the People’s Republic of China has contributed US$ 300,000 to the United Nations Relief and Works Agency for Palestine Refugees in the Near East (UNRWA) in support of the Agency’s core programmes and services for Palestine refugees, including education, health, relief and social services and camp improvement.

The contribution marks a 50 per cent increase in China’s annual contribution to the Agency’s Programme Budget and was formally presented by the Representative of the People’s Republic of China to the Palestinian National Authority, Ambassador Chen Xingzhong, to the UNRWA Commissioner-General, Pierre Krähenbühl, during a signing ceremony in Ramallah on Sunday, 20 November.

“I am very grateful for the increased contribution and encouraged by the deepening partnership and cooperation with China,” said Mr. Krähenbühl. “I appreciate China’s commitment to addressing the plight of Palestine refugees and to strengthening its support to the Agency’s human development activities. UNRWA is keen to explore further partnership opportunities with China, in particular with a focus on youth.”

The People’s Republic of China first contributed to UNRWA in 1964. In recent years, it has rapidly increased its contributions to the Agency, and in recognition of the important partnership, the UNRWA Commissioner-General made his first official visit to the country on 5 July 2015.