Home » Newsroom » Press Releases » China Provides US$ 2.35 Million in Support of UNRWA Food Assistance in Gaza
Back to Newsroom

China Provides US$ 2.35 Million in Support of UNRWA Food Assistance in Gaza 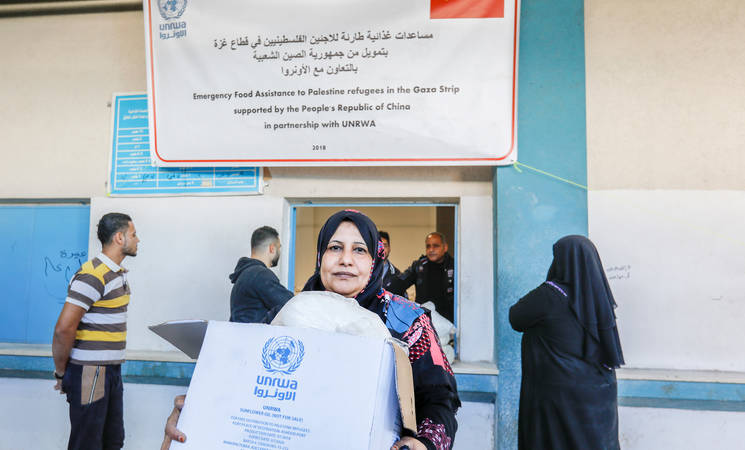 The United Nations Relief and Works Agency for Palestine Refugees in the Near East (UNRWA) acknowledges the generous contribution from the People’s Republic of China (PRC) of US$ 2.35 million in support of the Agency’s 2018 Emergency Appeal for the occupied Palestinian territory (oPt).

This generous contribution from China contributed to the critical emergency food assistance to nearly one million abject and absolute poor Palestine refugees in Gaza from October through December 2018 as part of the Agency’s fourth round of 2018 emergency food distribution. Funding support of this nature remains critical in helping to mitigate the severity of food insecurity experienced amongst Palestine refugees living under blockade in Gaza.

In referencing their support to the UNRWA Emergency Food Programme, His Excellency, Head of the Representative Office, People’s Republic of China to the Palestinian National Authority, Ambassador Guo Wei, said, “China attaches great importance to the vital role that UNRWA plays in alleviating the humanitarian situation of Palestine refugees and appreciates the work of UNRWA in providing health, education and other basic services to them. For this reason, the Chinese government has contributed an additional US$ 2 million to UNRWA this year. I hope that these food packages can let the Palestinian people feel the sincere concern and help from the Chinese people. China is willing to continue supporting the work of UNRWA and provide more assistance to the Palestinian people."

UNRWA Director of Operations in Gaza, Matthias Schmale, expressed his sincere gratitude to the Government of China for its support to the Agency: “China has been a strong and consistent supporter of UNRWA and this year provided additional assistance to the UNRWA Emergency Food Programme in Gaza at a time when the Agency was critically underfunded. China remains an important and valued donor to UNRWA and I sincerely thank them for their sustained commitment to the Agency and to Palestine refugees.”

The People’s Republic of China has been a long-standing supporter of UNRWA. This year’s contribution represents a significant increase from previous years and raises China’s overall funding to the Agency to an unprecedented US$ 2.35 million.