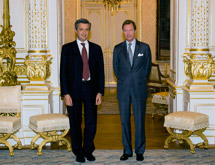 Filippo Grandi, Commissioner-General of the United Nations Relief and Works Agency for Palestine Refugees in the Near East (UNRWA), made his first official visit to Luxembourg on 8 December. During his visit Mr Grandi met with the Minister of Cooperation and Humanitarian Action, Madame Marie-Josée Jacobs, for discussions on Luxembourg’s support to UNRWA and the situation in the Agency’s areas of operation.

During their first meeting they underlined the importance of the strong and enduring partnership between Luxembourg and UNRWA in working effectively together to improve the conditions of Palestine refugees throughout the region.

The Commissioner-General also met with the Secretary General of the Ministry of Foreign Affairs, Mr Paul Duhr, the President of the Chamber of Deputies, Mr Laurent Mosar and was honoured by being granted an audience with His Royal Highness, the Grand Duke of Luxembourg.

The Commissioner-General and Minister Jacobs signed a funding agreement for an additional contribution of EUR 1.5 million which will contribute directly to the delivery of UNRWA’s health programme in the occupied Palestinian territory. This will bring the total amount of Luxembourg’s contributions in 2010 to EUR 4.25 million.

Luxembourg’s contributions have increased steadily over the years and it is now one of UNRWA’s most consistent donors, supporting UNRWA‘s core activities in the fields of health and education, as well as microfinance projects. With this latest contribution, the Grand Duchy has surpassed the threshold required to be eligible to join UNRWA’s 23 member Advisory Commission.