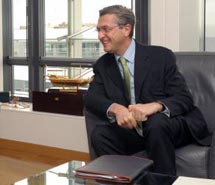 Today, Kristalina Georgieva, European Commissioner for International Cooperation, Humanitarian Aid and Crisis Response, received UNRWA (United Nations Relief and Works Agency) Commissioner-General Filippo Grandi. During their first meeting they underlined the importance of the strong and enduring partnership between the Commission and UNRWA in working effectively together to improve the conditions of Palestinian refugees throughout the region. During their discussion they talked about the humanitarian situation in the region, as well as the Middle East peace process, the success of which would be the only durable solution to the plight of the Palestinian refugees.

"I am pleased to have met with Mr Grandi so early on in my tenure as UNRWA is one of our most important partners in our humanitarian efforts in the Middle East," said Commissioner Georgieva after the meeting. "As UNRWA marks its 60th anniversary and we look back at 60 years of excellent work it also brings home that 60 years later the humanitarian situation of Palestinian population has yet not improved, quite the contrary. Since the 2008 blockade the humanitarian situation has worsened. We need to try everything we can to improve access to Gaza, to encourage the easing of restrictions in the West Bank and facilitate the delivery of much-needed assistance. As the largest multilateral donor to UNRWA we will continue our support to its vital work to provide not only help but hope for all Palestinian population and refugees throughout the region. Mr Grandi and his organisation can count on our close cooperation," Mrs Georgieva added.

Having confirmed the quality and strength of UNRWA‘s relationship with the European Commission, Mr Grandi said: "We look forward to continued European support at a time when our organisation is further improving its services in circumstances under which humanitarian aid is often very difficult to deliver. I am delighted that the Commissioner plans to visit the Middle East later this year and I look forward to receiving her there."

UNRWA (the United Nations Relief and Works Agency for Palestine Refugees in the Near East), which marked its 60th anniversary on 1 May, provides assistance, education, health, relief and protection and advocacy for some 4.7 million registered Palestine refugees in Jordan, Lebanon, Syria and the occupied Palestinian territory, pending a solution to their plight.

Since 1971 the European Union has regularly supported UNRWA and is now its largest multilateral donor. Since 2000, the European Commission has contributed over €1 billion to UNRWA, an average of €110 million per year. Out of this, nearly one quarter of the support has been provided by the EC’s Humanitarian Aid department (ECHO) for UNRWA’s emergency appeals for humanitarian assistance in the West Bank and Gaza. In combination with contributions from EU member states, EC contributions cover nearly half of UNRWA’s budget.

For more information about the European Commission‘s humanitarian aid: