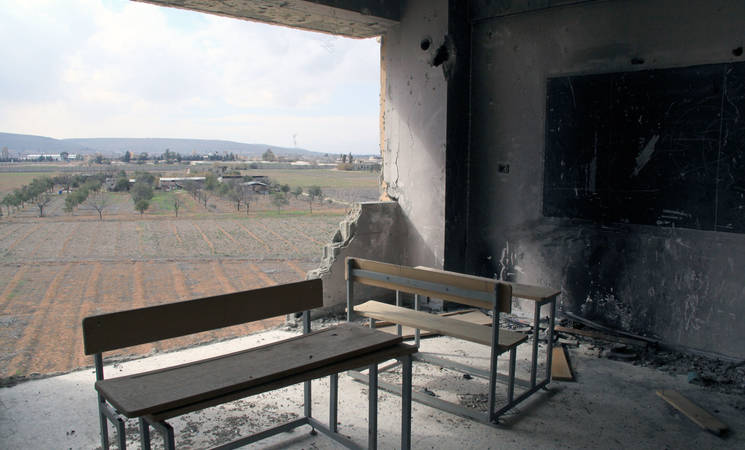 ‘Syria: Alienation and Violence, Impact of the Syria Crisis Report’ produced by the Syrian Centre for Policy Research (SCPR) with the support of UNDP and UNRWA, reveals the extent of dramatic setbacks in human and economic development as Syria has been ravaged by war.  The average life expectancy for Syrians in 2014 has dropped by more than 20 years, from 79.5 in 2010 to 55.7, due to violence and the breakdown of the country’s public infrastructure. This situation, exacerbated by the contracting of the economy, is giving rise to localized ‘economies of violence’ – a warning to all stakeholders in the Syria conflict.

After four years of armed conflict, economic disintegration and social fragmentation has transformed Syria’s population. It has been hollowed by 15 per cent. Almost four million Syrians have fled as refugees and another 1.5 million migrated to find work elsewhere. Over six million Syrians (roughly 40 per cent of the population) have been internally displaced. For Palestine refugees in Syria, over 60 per cent of the population has been displaced by armed violence.

The conflict has accelerated the reversal of human development gains Syria achieved by 2010, with its Human Development Index score rolled back by 31 per cent. The conflict has also corroded the human development that the international community and UNRWA have helped Palestine refugees achieve over the past 64 years. Over 95 per cent of the remaining population is reliant on UNRWA humanitarian assistance to meet their minimum needs.

Since the start of the conflict, the Syrian economy has lost US$ 202.6 billion through capital flight, destruction, looting of capital stock and GDP loss of US$ 119.7 billion. Today, the country is plagued with joblessness with unemployment at 58 per cent. For those who remain in formal employment, 55 per cent work in the public sector.

Four or every five Syrians live below the national poverty line, with almost two-thirds of the population surviving in extreme poverty as they struggle to meet basic food and households needs; 30 per cent are unable to meet their basic food needs. In conflict zones and besieged areas, the abject poor face hunger, malnutrition and even starvation.

In the midst of this social disintegration and economic degradation, the education, health and social welfare systems are in a state of collapse. Half of all school children have not attended school for the past three years. Humanitarian interventions by UN agencies, NGOs and others are unable to keep pace with the rapidly escalating needs of the poor and displaced, who are increasing exposed to insecurity and sectarian violence. During this time, 6 per cent of the population were killed, maimed or wounded in the conflict. As the conflict intensified in 2014, fatalities climbed to 210,000, while the number of wounded grew to 840,000.

The report relates Syria’s decline to the growth of ‘economies of violence’ where national sovereignty, the rule of law and human security have been undermined. Localized economies of violence are often linked to militias, criminal networks and black markets that exploit commerce, trade and trafficking for malign purpose and illegitimate gain.

The report makes clear that while the odds are unevenly stacked, there is still hope of reversing the devastating trends if the conflict can be swiftly resolved through a committed political process that can restore a sense of security, well-being and rehabilitation for those that the conflict has robbed of agency.

UNRWA continues to appeal for all efforts to be made to find a negotiated solution as a matter of utmost priority.