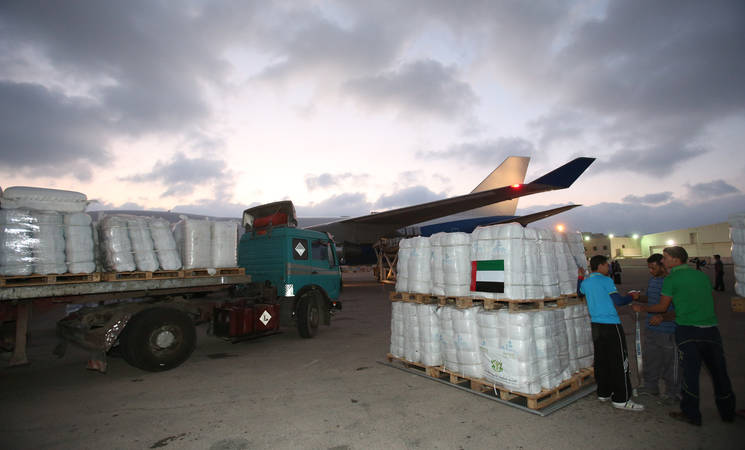 As the number of casualties and injured civilians rises in the Gaza Strip, aid agencies have geared up for the emergency response and mobilized relief supplies from the International Humanitarian City (IHC), in Dubai, United Arab Emirates. These supplies have been donated to the UN Relief and Works Agency (UNRWA) for thousands of vulnerable displaced families in Gaza.

Under the direction of HH Sheikh Mohammed Bin Rashid Al Maktoum, Vice-President and Prime Minister of UAE and Ruler of Dubai, a special airlift in support of displaced families in Gaza began on Sunday from the Royal Wing in Dubai, where a 747 cargo took off carrying 115 metric tons of aid, containing 45,000 mattresses, 10,000 blankets and 220 hygiene kits.  The plane landed at Marka International Airport in Amman early on Monday, 21 July.

"We are very grateful for the immediate reaction and most generous response we received from Dubai and all the IHC members to our call for help", said Pierre Krähenbühl, UNRWA Commissioner-General, who added that "the Dubai airlift is one of the best examples of how effective humanitarians can be when working together."

Relief items included jerrycans, sleeping mats, blankets, tarpaulins, hygiene kits and kitchen sets. They were dispatched from IHC warehouses, which hold supplies, as well as some of the largest global stockpiles, for aid agencies including UNHCR, WFP and IFRC, and then transferred to the royal aircraft in the Dubai Air Wing.

In the coming days, more airlifts are scheduled to arrive in Amman, from where UNRWA will truck the aid into Gaza for distribution. UNRWA plans to expand the scope of the donations to include emergency food parcels as stocks of food and other essential goods dwindle.