Home » Newsroom » News Releases » During a visit to Syria, UNRWA Advisory Commission members express their strong support to Palestine refugees
Back to Newsroom

During a visit to Syria, UNRWA Advisory Commission members express their strong support to Palestine refugees 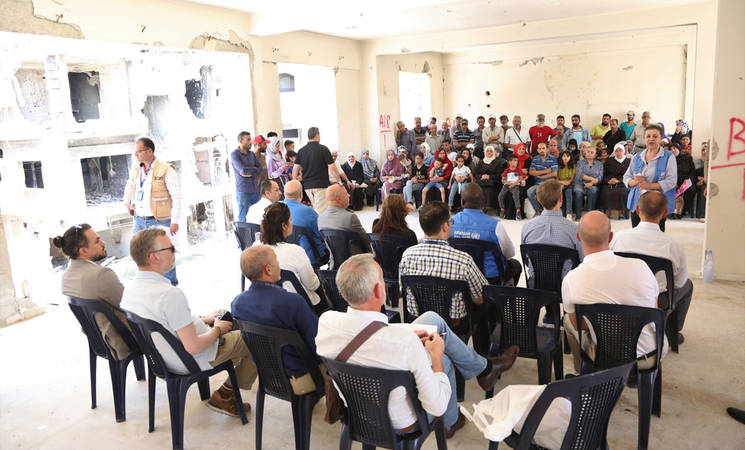 A delegation of UNRWA Advisory Commission members visited UNRWA in Syria on the 18and 19June 2022, the first such visit since the conflict started in the country over a decade ago.  The delegation included Finland, Ireland, Italy, Japan, Lebanon, Norway, Palestine, Sweden, Switzerland, Syria, and the European Union was accompanied by Ms. Leni Stenseth, UNRWA Deputy Commissioner-General, and Mr. Amanya Michael-Ebye, Director of UNRWA Affairs in Syria.

Visiting the Yarmouk, Sbeineh, and Khan Eshieh camps in Damascus, the UNRWA emergency cash assistance centre and the Damascus Training Centre (for Technical and Vocational Education), the delegation was briefed on UNRWA achievements, challenges, priorities and the growing needs of Palestine refugees in Syria amid a deteriorating economy, rising inflation, and rapid increases in the prices of basic commodities.  They also listened to a briefing on the Agency's phased response plans for two camps severely affected by the conflict, namely Yarmouk in Damascus and Ein el Tal in Aleppo. "UNRWA is urgently seeking funding to rehabilitate its installations in those camps, to be able to resume essential services for Palestine refugees who have desperately returned to the camp to damaged homes, escaping rising costs of rent where they were displaced," Amanya said.

UNRWA Deputy Commissioner-General, Leni Stenseth, expressed gratitude for the commitment of the governments of UNRWA Advisory Commission representatives, highlighting that the visit will help the participants to see first-hand the situation of Palestine refugees, the need to rehabilitate UNRWA installations in devastated Yarmouk and Ein el Tal camps, and the support required from donors. "We deeply count on donors' generous contributions to meet the enormous needs of the Palestine refugee community in Syria and to rehabilitate Yarmouk and Ein el Tal camps.  Without your help we will not have the financial capabilities to rehabilitate the UNRWA installations in the camp. Thanks to your ongoing support, various critical UNRWA services have been sustained to Palestine refugees in Syria," Stenseth said.

In his presentation, Amanya said: "Like Syrians, Palestine refugees struggle to cope with the impacts of protracted crisis, displacement and myriad other challenges. They rely entirely on UNRWA services and cash assistance. UNRWA urgently needs sustainable funding to support the resilience of the refugees”

During the visit to Yarmouk, the delegation heard first-hand testimonies of UNRWA staff about health services provided during the most challenging circumstances. They visited the Agency's destroyed installations in the camp, where UNRWA plans to carry out rehabilitation works to resume its services for those who returned, including students who currently attend schools outside Yarmouk.

While in Sbeineh camp, where UNRWA was able to rehabilitate its installations in 2017 and re-establish services to support dignified returns of refugees, the delegation toured the Agency's health and community centres, where they interacted with beneficiaries and learned about their challenges, but also about their positive feedback for the resumption of UNRWA services in the camp in 2017.

In the Khan Eshieh camp, where Palestine refugees have gradually returned starting from 2016, the delegation toured an UNRW- rehabilitated community centre and a school.

In the Damascus Training Centre, the delegation received briefings on the UNRWA technical and vocational education and training programme to prepare young Palestine refugees for the job market. "Investing in youth means investing in the future of an entire generation," Amanya said.

Palestine refugee beneficiaries and UNRWA front line staff at the emergency cash assistance centre underlined that UNRWA cash assistance is a lifeline for Palestine refugees who face acute and growing needs resulting from  the protracted crisis in Syria, compounded with the challenges created by COVID-19 and the unprecedented economic crisis.

The delegation also met the UN Resident Coordinator and Humanitarian Coordinator, Mr. Imran Riza, who updated the members with the humanitarian situation and most urgent needs in the country, UN priorities and humanitarian response in Syria and appealed to them to provide urgently-needed funding to support the critical work of the UN in Syria.

Expressing their full support and commitment to UNRWA work for Palestine refugees, delegation members promised to pass on the messages to their governments. Their support is needed to make sure UNRWA services continue in an increasingly challenging environment.