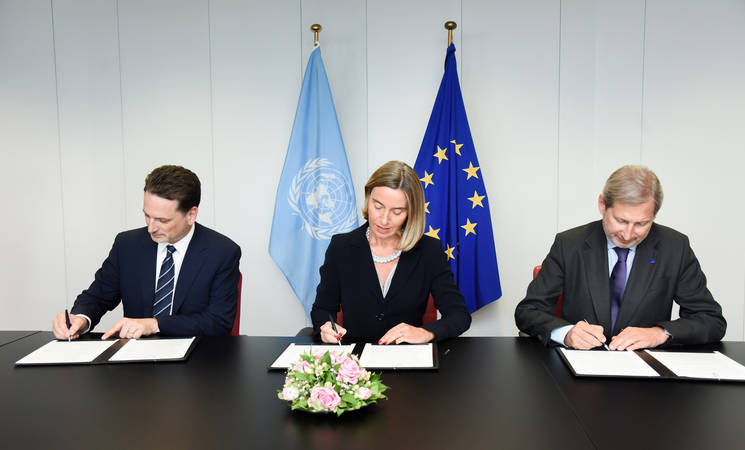 On 7 June 2017, Federica Mogherini, the High Representative of the European Union (EU) for Foreign Affairs and Security Policy and Vice-President of the European Commission; Johannes Hahn, Member of the European Commission in charge of European Neighbourhood Policy and Enlargement Negotiations; and Pierre Krähenbühl, the Commissioner-General of the United Nations Relief and Works Agency for Palestine Refugees in the Near East (UNRWA), signed a Joint Declaration on EU support to UNRWA for the period 2017-2020. They also announced the signature of the financial agreement for the EU contribution to the UNRWA Programme Budget for 2017, which covers the Agency’s essential services in terms of education, health care, and relief and social services.

In line with the Joint Declaration, Federica Mogherini recognized the essential role of the Agency in the Middle East. “With its tireless work, UNRWA keeps supporting Palestine refugees, providing education, promoting socio-economic development and stability in the Middle East," she said. “The international support is key to UNRWA: the European Union will keep investing in one of the pillars of its Middle East peace policy."

The 2017-2020 Joint Declaration strengthens the political nature of the EU-UNRWA partnership and reaffirms the European Union’s commitment to promoting the rights of Palestine refugees and supporting the long-term financial stability of the Agency in a context of intensified budgetary constraints and operational challenges.

“The European Union is committed to support UNRWA in further reform efforts, building on the important work underway, to ensure the provision of quality core services to vulnerable Palestine refugees. I am delighted that the EU/UNRWA partnership will from 2017 take an increasingly visible form in support to selected schools and health clinics,” said Commissioner Hahn.

Pierre Krähenbühl thanked the European Union for its long-standing commitment: “For the past four decades, the European Union has stood shoulder to shoulder with UNRWA, both providing the necessary humanitarian assistance in times of crisis and supporting the long-term human development of Palestine refugees,” he said. “Today, the European Union’s strong and reliable support – both political and financial – continues to be instrumental in mitigating the impact of multiple regional crises. It also strengthens the dignity and preserves hope for millions of Palestine refugees.”

In the Joint Declaration, the European Union committed to continue assisting UNRWA in securing financial resources to enable the Agency to support Palestine refugees. The EU will essentially contribute to the funding of quality education for 500,000 children, primary health care for more than 3.5 million patients and assistance to over 250,000 acutely vulnerable Palestine refugees.

On the margins of the signing ceremony, the European Union and UNRWA announced the disbursement of a EUR 82 million commitment to the UNRWA Programme Budget for 2017. Among others, this will help pay the salaries of 32,000 local UNRWA staff, most of whom are Palestine refugees themselves, and contribute to the running costs of close to 700 UNRWA schools and 140 UNRWA health-care centres.

The text of the EU-UNRWA Joint Declaration can be found here.

Collectively, the EU and its Member States are also among the largest contributors to the Agency’s humanitarian emergency appeals and projects in response to various crises and specific needs across the region.

In addition to the EUR 82 million EU contribution to the Programme Budget in 2017, the EU does fund ad hoc projects to respond to specific needs.

WORLD PREMIERE: UNITED AS ONE
Germany contributes EUR 25 Million in support of Palestine refugees in Gaza and Lebanon
A Palestine Refugee Family in the Grips of Lebanon’s Economic Meltdown
Lebanon: UNRWA calls for support for Palestine refugees, amongst the most vulnerable communities in the country
syria: unrwa - progress highlights of emergency appeal january-june 2021
Socio-economic Survey on Palestine Refugees from Syria living in Lebanon
syria regional crisis emergency appeal 2021